The buzzer beater is the most exciting play in all of sports.  As many basketball games as I go to, I have seen my fair share of them, both for and against us over the years, but it's very rare to see one from half court.  I was sitting in the auburn student section when Reggie Sharp did the same thing to us at old Beard Eaves Memorial gym.  Releford's heroics yesterday more than made up for that miserable experience.

Of course, it should not have came down to that.  We had a 17 point lead in the first half, and led by 14 at halftime.  Releford had a great game, beyond just the miracle shot.  We made some 3s early and played great defense, holding UGA to 18 first half points.

We went through spells in the second half where we did not take good care of the basketball.  I thought we were out of control on our dribble drive many times, leading to turnovers and low percentage shots.  Georgia started to have some success in the post, and Caldwell-Pope finally found his touch, allowing the Bulldogs to consistently chip away over the course of the game.

I've complained about our lack of killer instinct all year, and it almost bit us again, but on the positive side we found a way to win, and that's all that matters.  I thought the guys did a good job of staying focused and not letting one mistake lead to more.  At one point Retin turned the ball over, but he hustled back on defense and got a blocked shot on what looked like an easy fast break layup for Georgia.  Nick Jacobs had 3 turnovers and gave up some easy baskets, but he was also 5 for 5 from the free throw line.  After the Bulldogs tied it in the final minute, Lacey telegraphed a pass that Releford would eventually turn over, but we all know how Trevor rectified that one. 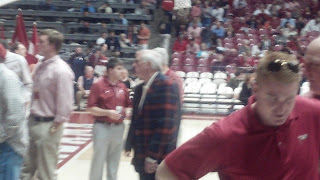 The 100 year celebration at halftime was great.  They had a very nice video showing the program's highlights over the years, and  lots of former players and coaches came back, with the loudest applause being for Wimp Sanderson who broke out the plaid for the occasion.

The crowd was great, probably close to 12,000 or so there, and they were into the game and loud for the most part.  It was nice speaking to the blog reader, who's name I did not catch, before the game.  Although it was a little insulting that he mistook me for Bobbyjack (I'm clearly much better looking (g)), it's always good to know there are actually some people out there reading.

That concludes the regular season, our 3rd straight with 20 wins.  Up next, we go to Nashville for the SEC tournament as the 4 seed.  Unfortunately, nearly every bubble team won this weekend, so we will probably need to win the whole thing to go dancing, although I could see a scenario where beating Tennessee and Florida to make it to the Championship game could get us to Dayton.  Thankfully, Tennessee came through for us against Missouri, otherwise we would be playing Thursday.  As it is, our first game will be against Tennessee (unless they somehow lose to South Carolina or Mississippi State) Friday at 2:30.  That will be a tough game, as the Vols are playing as well as anybody in the league right now, not to mention they should have a good crowd in Nashville.  Looking ahead, if we get past UT, we would most likely play Florida (unless they lose to Georgia/LSU) on Friday.  It's a very tough draw.
Posted by DJC at 3:15 PM

We beat UT, and UF we are in. Anything less we are likely out, that simple.

And I disagree that the crowd was good, it was no where near full and Andrew Steele deserved a better crowd on senior day, same with the 100 years of Bama basketball.

Just make it to Sunday! RTR

"......it's always good to know there are actually some people out there reading."


ahh, i guess i'll take that as a compliment, but it sure didn't sound like one.