Sorry for the delay in getting this recap up, but believe it or not I do have a day job that occasionally requires some actual work. 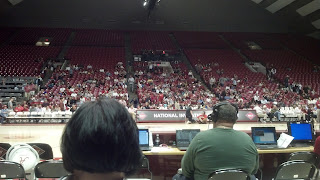 As you can see, I had a different vantage point than normal.  I couldn't get my regular tickets as they were all general admission, so I had floor seats behind the scorer's table.

Northeastern is not a great team to start with, and they were missing their leading scorer so they really did not have much of a chance.  Still, some crazy things always happen in the NIT, largely in part because some teams are much more motivated than others.

Given the disappointment around the program about playing in Tuscaloosa as opposed to in the big dance, I was generally pleased with the team's effort.  We played great defense early in the game, forcing a number of turnovers and getting some second chance opportunities on offense to take a 17-3 lead.  Once again, the lack of a killer instinct was evident as we went though a scoring drought that allowed the Huskies to cut the lead to 5 at halftime, and down to 1 early in the second half.  Nick Jacobs picked up 2 quick fouls, and ended up with 3 by halftime, which really hurt our offense in the first half, as Northeastern is a rare team with less size and athleticism than us in the post.  We were sloppy with the ball and missed some assignments on defense to allow the Huskies to go on their run.

Fortunately, we responded with a 22-0 run of our own.  Levi exploited a mismatch by beating his man on the baseline for a couple of dunks.  Levi had a very good game overall.  Retin Obasohan had a nice game as well, and he even showed off his vertical on an alley-oop from Trevor Lacey.  While I still don't think this tournament can be as beneficial to us as it was two years ago, I do think the experience can help guys like Devonta Pollard (who had a nice game and made some plays that don't really show up on the stat line) and Retin Obasohan, who I think has the potential to be really good for us next year.

After the 22-0 run we cruised to victory, ultimately winning by 19 despite shooting only 4 of 19 from 3 point range.  It was good to see the walkons get into the game in the final minute.

Sitting close to the bench, I can occasionally hear things being said by the coaching staff or players, but sitting just a little bit closer last night I could hear almost all of the instructions Coach Grant was yelling out during the game.  Of course, some of the terminology is specific to our system and not readily understandable, but what really struck me was how much instruction Moussa Gueye requires on offense.  As far as I can tell, Moussa does not do anything on offense without Coach Grant's instruction.  Every single possession it was "other side Moose",  "Moussa, Post!"  "Moussa, C'mon" (this meant go set a high ball screen.)  "Roll Moose"  (Of course this would follow the ball screen.).  When he got called for 3 seconds, Coach Grant did not even get onto him for it, he just turned around and given the expression on his face, I think Coach believed it was his fault for not instructing him to get out of the lane.

The crowd was almost non-existent, I would say less than 3,000 there.  That is the norm for NIT games these days, the exception was Robert Morris who's gym only holds about 3,000.  I think it's unfair to compare these crowds to the NIT run 2 years ago.  Two years ago we generally felt (rightly or wrongly) that we should have been in the NCAA tournament, and we were "post season starved" in that we hadn't been the last few years.  Generally speaking, the lower seeds tend to be teams that are "happy to be here" while the higher seeds are disappointed in not making the big dance.  I would not be surprised to see the NIT revisit the policy of awarding home court to the higher seed in the coming years.    The small gathering that showed up was into the game, and gave Coach Grant a round of applause as he took the court pregame.  He acknowledged by looking over with a wink and a nod and mouthing "I appreciate it."  I think he realizes there is some negativity among the fan base right now and truly appreciates those who are still supporting his efforts to get things going back in the right direction.

Up next, the tree cut down the Lumberjacks so we will play the Stanford Cardinal at 11 am Saturday morning in Tuscaloosa.  I watched the 2nd half of the Stanford game, and while they could give us some matchup problems this is a team we should beat.  At least it's an early game giving us the rest of the day to watch the NCAA tournament.
Posted by DJC at 6:52 PM

One thing I noticed was that late in the first half we started trying to be to fancy, and got sloppy with the ball. It felt like our guy's were more concerned with getting a highlight play than just playing ball, and it allowed Northeastern to get back into the game. I was glad too see that we recovered to win with virtually no drama. that In other news Mal Moore retired, would love to hear everybody's suggestions for who the new AD should be.

Nice to see Lacey show some fire and make some plays in key moments. It's been an up and down year for him, but the team needs him to play at a higher level if they want to keep playing past Saturday, and certainly next season.

Stanford will be a test. Their size up front bothers me. We will need to see the good Nick Jacobs on Saturday.

i thought Lacey's body language was crap coming out of the half and it looked as if he and Grant were into it with each other. after one possession where Lacey stood dribbling the ball outside the three pt line, waiting for someone to move, he finally threw up and hit a three. he was clearly frustrated and as he was moving down court to defend it looked as if he was jawing with the bench and pointing at his head. on another possession, he drove the lane, scored and then was benched the next timeout.


from your vantage dj, what was your take?

Saw that too, Lacey's body language has been concerning for weeks, heck months. It is becoming clearer and clearer that Trevor Lacey does not fit CAG's system. You see flashes of what he can be, but you can't see his full potential because he does not fit Grant's system. It reminds me of Alonzo Gee and CMG.

I could not hear what was said. I do think you are right in that Coach Grant was not pleased at that point.

Not happy with what? That a player dare defied his no freedom, stall ball offense.