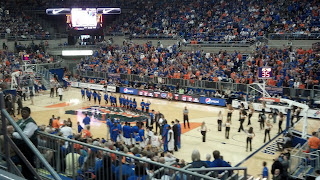 The game was actually closer than the score indicated.  I hate to lose, but overall I was pleased with how we played today.  We took an elite team to task on the road, but could not hold on to an 8 point lead in the final 10 minutes.

We came in prohibitive underdogs, and at one point in the first half it looked like we might get run out of the gym.  We were not making shots and after the Gators bricked a couple of early 3's they figured out our weakness in the post and started taking advantage.  They built a 19-8 lead, but the team didn't quit, turned it up on defense, forced some turnovers, and was able to claw back into the game, trailing by only 3 at halftime.

The start of the second half could not have been better for us.  Our zone defense had the Gators frustrated offensively.  We were crashing the boards and getting second chance opportunities, and generally "uglying up the game" to provide us with our best chance of winning.

Billy Donovan called a couple of timeouts and got his team motivated.  You have to give credit to Florida, they are the better team and proved it when they had to.  We went through another one of our scoring droughts, and you just can't afford to do that and expect to win these types of games.  I'm too lazy to look it up  but I think UF went on a 19-2 run.

Despite all of that, and despite the lopsided appearance of the final score, we still had a fighting chance in the last couple of minutes, but could not catch a break.  Down 6, Cooper made a great steal and had an open path to basket, but stepped on the sideline.  Then, we played great defense and Florida took a contested 3 with 1:05 left in the game and only 5 seconds remaining on the shot clock, and the ball wedged between the rim and backboard, of course they had the arrow,  giving them a fresh 35 and forcing us to foul.  That result was arguably even worse than if he had made the shot.

Lacey started the game on fire, making a couple of 3s to keep us in it early, but I thought he tried to do too much after that.  Retin has played well lately, and I would have liked to have seen him have a chance to get in the game down the stretch.  The Gator's game plan clearly was to shut down Releford, and he still had 12 points, but did not do much the last 10 minutes.  We really need Levi to get out  of his funk, he missed some wide open shots that could have changed the game.  I thought Nick Jacobs played as well as can be expected.  He's obviously a huge liability on defense, but he did put up 11 points and 5 rebounds.  Once again, things went south after Moussa picked up his 4th foul.  Speaking of Moussa, his running hook shot actually looked pretty good.  Maybe it was a fluke, but if it's not, I wouldn't mind him going to that move more often.

I don't like to bitch about the officiating, because I recognize that it's a very difficult game to call.  I also try to stay away from pointing to fouls/free throw discrepancy as a basis for such criticism, as I recognize that different skill levels and styles of play can lead to legitimate discrepancies, but I thought the amount of contact required to constitute a foul varied greatly depending on what end of the court we were on.  They were in the double bonus both halves and we never even got in the bonus, and they play a very similar style of defense to ours.  There was one particular charge call that went against Cooper which erased a potential 3 point opportunity for us at a key point in the game that from my vantage point appeared to be the wrong call.  I don't recall a single block/charge situation going our way.

With the loss, I think our chances of an at large bid are officially dead.  Let's try to hang on to a top 4 seed and win the SEC tournament.

The O'Dome seats about 12,000 and it was pretty much packed, with only a few scattered empty seats in the very upper level.  Contrary to how it looks on TV, it is not a nice facility at all.  In fact, it may be one of the worst in the SEC.  Most of the seats are of the temporary bleacher type variety and there is literally no concourse, you walk in through one of 4 gates at the corners and navigate a very narrow crowded walkway between the "1" and "2" levels of seating to get to your seats.

The Florida fans were, to use one of their favorite terms, "fantastic."  They weren't very knowledgeable, as an example one guy asked me, "who just called the timeout" when we had the ball, but they were enthusiastic in supporting their team, at least in the second half.  I think the early start caused them to take a while to get woke up and into the game.  Also, spring break starts this week for them, but their student section, albeit relatively small, was still packed.  There were a couple of hundred Alabama fans scattered throughout, including a few in their student section, but only 2 others in my section a few rows behind me.  The Gators have one of the dumbest and most annoying cheers in basketball, every time the ball goes out of bounds on the visiting team, the PA announcer goes, "Gator's basketball" and the crowd responds in unison, "Fantastic!"  Anyway, several Gator fans told me that we played them tougher there than anyone else this season.  My only negative experience was with the scalper who lied to me and told me that my seat was behind the UA bench.  I'm not sure if you can tell by the picture above, but it was actually behind the UF bench.  I did a 2 for 1 trade for it, since my 2 seats were way up in the corner, so I probably would have made the deal anyway, but I was a little disappointed to not be on the other end.    Florida is clearly the SEC's strongest team, so I will be rooting for them in the NCAA tournament later this month.

Up next, we go to the Tad Pad to take on the Ole Miss Rebels.  They've went from being an NCAA lock to likely on the outside looking in after a loss to a horrible Mississippi State team.  Tipoff is set for 8pm CST Tuesday on ESPNU.

"With the loss I think our chances at an at large birth are officially dead" Not so fast, Joe Lunardi currently has us a the FIRST team out of the NCAAT, at large hopes are definitely not dead, a loss at Ole Miss would end them though, but for now they are very much alive for now.

Doesn't make sense, but it looks like the winner of our game @ Ole Miss has the inside track to Dayton thanks to UTK, Ole Miss, and Kentucky losing yesterday.

I don't buy any of that. The committee does not set quotas by conference, so we aren't really battling those other SEC teams for a spot. Those teams losing helped us in the sense of getting a good draw for the SEC tournament, which I still say is our only shot, but may have actually hurt our at large chances from the standpoint of RPI. Jerry Palm is usually more accurate than Lunardi, if he has us in his first four out when the new bracket comes out, I might reconsider.

Lunardi has a 97% accuracy rate, he is usually right.

Officially they don't, but there is no way the SEC is getting more than 4 teams in the tourney. I suspect Kentucky wins out the regular season thus my belief the Ole Miss game is an elimination one (assuming neither wins the SECT).

I've never quite understood the fascination with Lunardi. Any serious basketball fan who keeps up with the games all year and the criteria it takes to make the tournament could accurately pick 97% of the field. Yet, ESPN fawns over this guy for three months.

The bubble is extra soft this year so Alabama is not out of it, but they're going to have to win their two remaining games and probably win a couple of games in the SEC tournament to feel good about an at-large bid. Winning the tournament would be the best option because there are several "mid-majors" who could steal bids should they lose in their conference tournaments (Belmont, Middle Tennessee, St. Mary's, Boise State, Akron and Louisiana Tech all currently have top 50 RPIs)

Forget about the NCAA tournament for a moment. Mississippi State and Arkansas did us a huge favor yesterday because it allowed Alabama to retain the second seed in the conference tournament. The remaining games against Ole Miss and Georgia are as important for retaining the 2-3 seed in the SEC tournament as it is for staying in the bubble hunt, because without a good seed in the conference tournament (and a good seed would be one on the opposite side of the bracket from Florida) Alabama's chances of making the NCAA decrease significantly.

Gators are now 14-0 at home. Gumps played really well but once Gators had their weakness figured out they had no chance. live scores

Don't see the SEC getting more than 3, will be suprised with 4.

You could pick 97% of the field correctly? Anyway, I do echo your sentiments about what Bama has to do. We have to win the last two, and probably win two in the SECT, or we will most likely end up on the wrong side of the bubble.

Yeah, I think I could. Granted, my schedule doesn't allow me to attend mock selections in my off time like "Joey Brackets", but I think I'm enough of a diehard college basketball fan that, if I sat down and looked at the teams and what they've done, I could pick 97% of the teams that will make up the field. Now, NITology, that's where it's at. Figure out that field, if you dare.