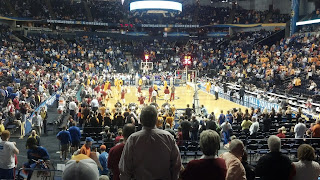 A great win today to keep the season alive, and a lot of players stepped up.  The biggest positive from today was that we answered their runs late in the game and managed to maintain the lead.  It was starting to have a similar feel to the game in Knoxville, and I was afraid we were going to blow it again.

I thought our game plan should have involved going after Stokes and trying to get him in foul trouble.  We didn't do much of that, and when we did, the refs didn't make the calls.  Early in the game he hurt us on the inside, but credit to Moussa and even Nick Jacobs for making adjustments and keeping him under control for most of the game, and especially in the 2nd half.

UT took an early 5 point lead but jacked up some bad outside shots which allowed us to get back into the game.  Releford had another outstanding game.  His 3 pointer at the buzzer at the end of the first half to stretch the lead to 4 was huge.

Retin continues to play very well and gave us another spark.  The PA announcers at Bridgestone arena had a very difficult time with his name.  I think he pronounced it about 6 different ways over the course of the game, none of which were anywhere close to correct.

We were able to stretch the lead to 9 in the second half, and UT made several runs to get back within 4 or 5, but we always had an answer.

Levi Randolph had a great game.  The UT fans sitting behind us, for some reason, were talking smack all game about how he "couldn't shoot."  He made most of his free throws and ended up with 15 points, not bad for a guy who can't shoot.

To win this game getting as little as we did out of Trevor Lacey and Rodney Cooper is remarkable.  Lacey in particular must do a better job of handling the basketball.  His turnovers could have killed us.

I thought Coach Grant did an excellent job of making the proper offense-defense substitutions.  I was surprised he left Gueye in with 2 fouls at the end of the first half, but thankfully it did not come back to bite us.

There was a good sized crowd for a weekday afternoon game, probably close 15,000 or so.  The split was probable 70/30 in favor of Tennessee among the non-Kentucky fans there, who made up close to half of the overall crowd.  We were in the Alabama section but were surrounded by obnoxious Tennessee fans.  The Kentucky fans were generally pulling for us which helped to even things out.

Up next, we get another shot at Florida tomorrow at noon.  If we want any chance of making the tournament, we must keep our undefeated on neutral courts and undefeated in Nashville record in tact.

Great win, unfortunately we can't celebrate it to long. We have to get ready for Florida. All in all great effort and win today. Tommorow is the biggest game of the Anthony Grant era.

guys, i know i'm a broken record on this, but we absolutely have the best play-by-play/color combo in the SEC, basketball OR football, in Chris Stewart and Brian Passink.


First, they're both basketball fans and aficionados. second, they both love all things Alabama. one of my favorite things about Stewart is his habit of doing the things an Alabama basketball fan would do at a game while calling the game. he frets over the players, exhorts them on. he screams at the refs. at one point today after pollard had been mugged on the offensive end, UT takes the ball down and a foul is called. Stewart is screaming at the top of his lungs "AND THEY CALLED THAT GARBAGE!" it's a very tense game and i'm worked up following it but i couldn't help but laugh. the guy is me at the game. he is my eyes. he puts me there even though i can't see it.


chris is going to be one of the greats. georgia had larry munson. auburn, jim fyffe. we have chris stewart and brian passink.


i would have love to have heard Stewart call the 'Bama comeback to beat LSU in football.

We have common ground here. Obviously, I'm either at or watching most of the games so I don't listen to their broadcasts as often, but from I do hear they are great. I relied on them a lot during the 2009 season when I was out of town for most of the year, and they did a great job. Both Chris and Brian are super nice people, too, if you ever get the chance to meet them.