Stanford never had a chance.  They are a tree.  This is what we do to trees: 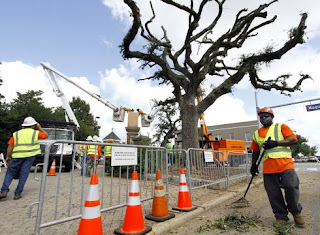 Having spent some time in the Bay area, I developed an affinity for the Cal Golden Bears, and naturally a corresponding disdain for Stanford, so this win was especially enjoyable.  It was arguably the most complete game we have played all year. 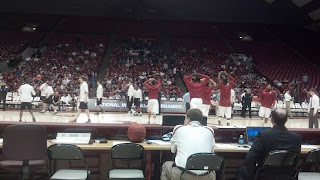 Stanford had no answers for the Tide's tenacious defense.  They scored 3 points in the first 5 minutes of the game and never got their inside game going.  Bama's offense was very solid throughout.  We avoided the long scoring droughts that have plagued us most of the year and managed to maintain the 10 point lead throughout.  Stanford would cut it to 4 or 5, but we were always able to answer and extend the lead back to double digits.  We did a much better job of adjusting to Stanford's changing defenses, whereas we've struggled in the past when teams would switch from a man to a zone out of a timeout.

The game plan was clearly to attack the basket with the dribble drive, and it worked very well.  While Stanford has some skilled big men, they aren't particularly strong.  We were able to get position on them and get them in foul trouble.  Powell picking up his 4th foul early in the second half was big and took them out of what they wanted to offensively.  I doubt their game plan coming in was to take half of their shots from 3 point range.

Coach Grant seemed to get aggravated with our guards, particularly Lacey and at times Releford early in the 2nd half, for not immediately pressing after made baskets.  He was very vocal in stating that he wanted immediate pressure on the ball and did not appreciate them taking their first couple of steps back down the court after made baskets.  When we executed the press as designed, it was very effective in producing turnovers and disrupting Stanford's offensive flow.

Driving to the basket and drawing fouls also allowed us to score some points from the free throw line, going 22 for 26.  When Stanford tried to switch to a zone, Levi knocked down a couple of 3s to get them out of it.  They couldn't focus their defense on any one guy, as we had 4 different players score in double figures.  Retin Obasohan was the player of the game with 14 points, and he stepped up big time in the second half after Lacey was called for his 4th foul.  I am really excited about Retin coming back next year.  He continues to improve, and shows an incredible amount of athletic ability.  His speed and quickness is obvious, but his jumping ability is particularly impressive to me.  He gets up and in a hurry, as evidenced by his 6 rebounds and his one authoritative blocked shot.  That's a trait  you don't find in many "undersized" point guards.    He's also shown the ability to throw down some alley oops.

If you were watching on TV, you may have seen me sitting right behind the scorer's table, getting onto the officials during a review of a Moussa Gueye foul in the first half.  I'm all for instant replay and getting the calls right, but sometimes I think the officials spend too much time looking at these replays.  In that instance, if Gueye's foul were intentional, it should be obvious after the first or second viewing.  They correctly ruled it was not a flagrant foul, but I think if after reviewing a play for 30 seconds or so, if it were flagrant, it would be fairly obvious by that point.  These long reviews disrupt the flow of the game.    On a somewhat related point, I also think officials spend too much time trying to get the clock down to the right tenth of a second late in games.  I've seen a lot of teams with no timeouts, essentially get a free timeout while the officials spend 3 minutes deciding if there is 2.4 or 2.5 seconds remaining.  That unfairly punishes the team that efficiently managed their timeouts throughout the game in my opinion, but I digress.

The crowd was much better than for the Northeastern game, I would estimate close to 7,000 people were there, and they were more into the game than any other crowd we've had this year.  I wish there was some way we could get these types of smaller but more passionate crowds for the pre conference games.  I really believe it might have made a difference against Mercer or Tulane.  Every time Stanford would cut into our lead, the crowd would get into the game and the team seemed to respond.

Up next, we face the Maryland Terrapins in the Great Eight of the NIT Tuesday night at 6:30 p.m. at Coleman Coliseum with a trip to New York on the line.  Maryland is a big time program with 2 wins over Duke this season, so it won't be an easy task.  General Admission tickets are on sale now for only $9 each, and they have a limited number of "complimentary youth" tickets, so it should be an inexpensive fun game to take the whole family to for those of you so inclined.  If you can't make it to Tuscaloosa, it will be televised on ESPN.

had to work, listened to game on the radio. texted a friend afterwards asking him how we looked. had to because Chris Stewart and Brian Passink make us sound like the Miami Heat. i can't say enough what a great job those guys do for basketball at the Capstone.

"The crowd was much better than for the Northeastern game, I would estimate close to 7,000 people were there, and they were more into the game than any other crowd we've had this year."

i think the crowd was announced as 6100 and some change. i was surprised considering the noise i heard over the radio.

when Chris announced AD Bill Battle was in the house you could tell there was a need for things to look good for the new AD. here's hoping he wasn't there just for show.

i'm not going to get into the particulars of what WE ALL know needs to be done to make that a better atmosphere for basketball. we've been down that road many times. but the crowd saturday was an example of what can happen if some common sense measures are taken in Coleman.

that crowd had an effect on the players and the game. and it's so much more than just that. it has a profound effect on recruiting. when we bring recruits in and that place is like a morgue, are we to be surprised they sign elsewhere??? we love to talk about what a great defensive team we are. i watched the louisville/colorado st. game saturday. their defense bulldoze the rams. i was astonished at the speed and hustle. (i had heard about the cards but hadn't seen much of them this year) i doubt anyone on our team short of trevor releford could make that team. those are the type players we need. and things must change to get them.

this is what upset me about the choice of Bill Battle as AD. Battle was chosen to continue the status quo in my opinion. his age is not a coincidence as is the fact he played on the same team as Mal.

anyone that thinks that Mal Moore "hand picked" him is high on the crimson koolaid. one man calls these shots. and that one man is paul bryant jr. now mind you jr. is no jerry jones. he doesn't like the publicity, doesn't run to the spotlight. but he donates big money to that athletic dept. for a reason.

we all know alabama basketball could be so much more. do the powers-that-be want it?? look and listen to how quickly and demonstrably things changed with the general admission policy of a meaningless NIT game. 6000 folks show up and it's our best crowd all year.

seating priorities will have to change. some folks (alum/donors) will be pissed. but if we want a relevant program, it has to happen.

Coach Battle, just do it.

Not surprised at either. Both are stagnant programs right now. I think Shaka takes the UCLA gig while MN tries to grab one from the SEC. When was the last time a 2nd (really 1st) round NCAAT matchup had 2 soon to be fired coaches in it?

if i'm the AD at UCLA, i'm throwing the bank at larranaga.

miami's program is broke and in shambles. unless larranaga subscribes to outdated moral codes such as loyalty and honesty, he's gone.

the guy took george freakin' mason to the final four. now, second year at miami, wins acc regular season, acc tournament and is in the sweet sixteen. every game they win from here just catapults him further into the stratosphere.


who would MN go after in the SEC?? fox? martin? kennedy? lateral moves if you ask me.

"A lot of coaches on the West Coast will be sad to see Ben go," said one Pac-12 coach. "He leveled the [recruiting] playing field."

Howland doesn't surprise me. Ever since that article came out about how he was running things at UCLA it felt like he was on borrowed time. UCLA still has enough pull that if they want to they can reach out to guys like Self and Calipari. Not sure they would be interested in the job, but you have to at least give them a call if you're UCLA. Shaka Smart is in high demand but I'm not sure he wants that job. It's a high demand job, and Shaka strikes me as someone who doesn't want to deal with the L.A. lifestyle and everything else that goes into working in that environment. His roots are in the Midwest so I'd buy his going to Minnesota before heading out to L.A. Then again, he didn't leave VCU for the Illinois job so he may be content to just hang out in Richmond. Same with Gregg Marshall at Wichita. Why leave? You're making a good living coaching a program with outstanding fan support. UCLA may be forced to follow the lead of its football program and turn to the pros for their next coach.

I just don't understand the logic in Minnesota firing Tubby. Yes, it was an up and down year, but it's freaking Minnesota in the freaking Big 10. What the heck do these people expect? It's insane. There is obviously no barometer of success in anything at this point. Tubby was there six seasons and took the team to three NCAA tournaments and two NITs in the wake of Dan Monson's mediocre tenure. I really feel Minnesota jumped the gun on this one. And it doesn't even make good financial sense. They just gave the guy an extension weeks ago and now they're buying him out. Wha? Wha? Wha? They better hope they find a knockout replacement like Illinois did because the Big 10 isn't getting any easier.

"outdated moral codes such as loyalty and honesty, he's gone."

You're not wrong in what you're saying Finebammer. I just hope you're not celebrating such an indictment.

"You're not wrong in what you're saying Finebammer. I just hope you're not celebrating such an indictment."


not leading the parade, dude, just watching it go by.

Tubby is a good coach, but he is overrated. He just could never break through there. Hard to criticize anybody for wanting more out of their program. Like Mike Davis at UAB, it's not that he was a bad coach, you just knew what you were getting from him, and both Minnesota and UAB wanted more.