5) Busch Stadium (St Louis)- the unfortunate thing was I happen to attend a Saturday day game where temperatures hit 100. For the first 3 innings of the game (against the Pirates) I seriously considered bailing early. Anyways, great atmosphere, cheap parking ($5 with about a 1/2 mile walk), decent bars around the park and food/beer selection inside was great. Not terribly pricey on seats and inside is very nice. Super knowledgeable fans around me... I'll go back anytime I'm around the area.

4) PNC Park (Pittsburgh)- been around a decade and saw crappy team after crappy Pirate teams ruin it. Thankfully the Pirates are good and I happen to see them this year there for the 1st time which was fun. Park is on the river, great scenery in and around the park... good bars around the area, close to downtown (cross the Clemente Bridge) and the food was decent. Note- I have worked literally right by this place on 4 separate occasions before but the Pirates were out of town.

3) Target Field (Minneapolis)- I wasn't expecting much to be honest when I stopped here along the way. What I saw was a 1000x improvement over the Metrodome... built overlooking downtown with all sorts of bars/restaurants right there in what seemed to be a really good area to hang out around. Parking was a bit of a pain and a decent hike ($10 for about a 3/4 mile hike), but that was good as I got to see a little bit more of the area. Inside it's awesome... seats are great, food was good and not overly expensive. My only complaint is it was 2nd most expensive ticket I bought on my 5 year trek around ballparks ($44). Still, a must see place for any MLB fan. 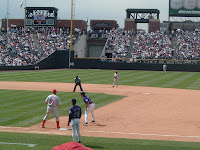 2) Coors Field (Denver)- I've been here a half dozen times over the last 10 years and it's one of my favorites mainly because of the location. It's situated near great restaurants, hotels, bars, clubs, etc. and easy to get to via light rail. Inside, it's spacious with good food and great beer selection (if you don't like Coors like me you will be okay there). Any time I'm in Denver I look to sneak to a game or two during my stay. For whatever reason I can't find my Coors Field pics... thought I backed them up when my USB drive went bad, but might not have (found my Angels photo though). Damn. I was sitting 24 rows behind home plate the last time.

1) AT&T Field (San Francisco)- Most baseball fans that have been here probably have it in their top 3. It's near downtown SF, but not in it, easily accessible by mass transit, easy in and out, and the bars/restaurants nearby are the best of all the parks I've been to. Inside it's immaculate... sitting on the bay with great views everywhere. The food is great, seats are good enough, and fans are fun. Only gripe... it's always colder than I expect it to be there. I was wearing a sweater to the Giants/Jays game in early June.

Hope you enjoyed my MLB park rundown... I don't think there will be any new parks in the next 10 years so I won't have to update this anytime soon :)
EDIT- found some pics from the missing parks. Boston is updated in 30-21, Anaheim is updated in 20-11, and Colorado is updated here. Colorado pic is from 04 though where I had a decent view from 1st base.
Posted by bobbyjack at 2:21 PM