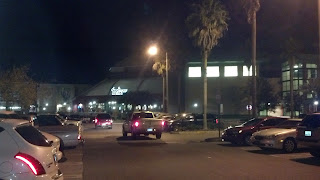 The good news is there is still a lot basketball to be played this season, it's only December.  That's also the bad news. 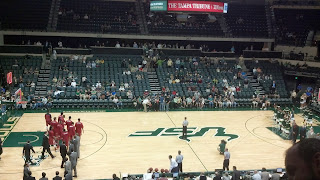 We changed the starting lineup once again, and started Retin over Algie Key.  We got off to a good start, building an early lead.  We started off in the press, and while we didn't force a lot of turnovers, I felt like we disrupted their offense.  We were able to get in transition after their missed shots, and we had an 11-2 lead in the early going.  I thought we got away from the press too soon.  USF does not shoot the ball very well, and we allowed them to settle into a halfcourt game where their bigs killed us.

That was one of many coaching decisions that I questioned throughout this game.  I understand Jimmie and Nick were having a difficult time guarding the Bulls freshman center, and Carl did as well as could be expected, but I would have used Jimmie more in the second half.  He has too much more upside to not be in the game.

Then, Shannon Hale comes in off the bench and makes a 3 and has a chance to win the game.  If Coach Grant has that much confidence in him to put him into the game at clutch time after sitting on the bench for 39 minutes, why doesn't he at least bring him in as a zone buster at some point earlier in the game?

We squandered the big early lead thanks to our inability to score on offense.  Much of this game was ugly, at one point I was wondering if the score would get out of the 40s.  We trailed by 4 at halftime, but we started the second half much like the first half and was able to retake the lead.  Unfortunately, USF answered with a run of their own and we were never able to get back over the hump, although we did manage to be in position to win or tie on the last possession.  Thankfully, they serve beer at the Sun Dome, that's about the only thing that made this game watchable.

On the positive side, we made our free throws, Retin had a great game, and Releford played well before fouling out.  Levi also had a solid game with 12 points and 5 boards.  Nick played well early and scored 10 points before the Bulls figured out he can't go right.  Cooper continues to be MIA.

We are better than our 4-4 record would indicate, but we aren't anywhere close to being an NCAA tournament team, and barring a miraculous run of upsets that isn't likely to change.  There are games on the schedule that you should win, some that could go either way, and some you will most likely lose.  We aren't pulling off any upsets and so far we've lost every game that falls into the "could go either way" category.  We will have at least 7 losses going into conference play, and once again our season is essentially over in December.

The Sun Dome is an excellent facility.  It seats about 10,000, and all of the seats are close to the court.  I'm sure the locals know a way around it, but I wasn't crazy about paying $10 to park and being directed in a way that led me to believe there were no other options.  The crowd was sparse, which makes the loss even more disheartening.  This was a chance to get a "road win" in an environment that was not at all hostile.  I will give credit to their students, the student section was pretty much full, they probably had around 2,500 students at the game.  Taking away the student section, I'm not sure there were 500 people there, and I would say 30% of that remaining 500 or so were Bama fans.  I'm not sure if you could hear it on TV, but their student section had organized chants of "au-burn" and "fuck you bama" at different points in the second half.  The only interactions I had with USF fans was with a couple of students who came over and sat with our group because they didn't want to sit in the 300 level of the student section.  They were actually very nice and hospitable.

The team was on my flight home this morning.  I sat next to one of the managers, who remained optimistic that we will get things turned around.  He said they normally charter a flight, but the athletic department requires them to fly commercially once per year, and this was their one commercial flight.  I wonder if the football team ever has to take a commercial flight?  I wonder if Kansas, Kentucky, or Duke take Southwest to their games?  Anyway, the guys seemed to still be down from the loss.

On a completely unrelated note, Buffalo Bills fans apparently travel well.  My hotel was full of them, and for the most part they were fat, loud, drunk, and obnoxious.  It was quite a scene at the pool yesterday afternoon.  I am glad to see the Bucs are beating them handily.  No offense to any Bills fans who may be reading this, my opinion is based only on the few handful of people I encountered.

Up next, the team takes the week off for final exams before facing the Charleston Southern Buccaneers in Tuscaloosa next Saturday.  Tip off has been moved to 7:30 p.m. due to graduation ceremonies.

Turning the season around would require us to beat multiple teams with significantly more talented than us. When was the last time we beat a team significantly more talented than us? The season is over. Stop with the scenarios. There is no hope. It's over. 8 games into the season. This team will win 16-17 regular season games at most. So we are not even headed to the NIT most likely. This team reminds me of Gottfried's last two teams. Probably even worse. The sky is falling in Tuscaloosa.

What's so frustrating is that there are some good things about this team that if they could just get on the same page, it could result in some success. We know how good Trevor is, Retin has been consistent, and Levi appears to be improving. Jimmie's upside is easy to see and Nick will produce. The key right now is the bench. Algie has done enough to earn a spot in the rotation. Carl's size is needed so he has to play. That leaves Shannon and Rodney. And right now, as much as I hate to say it, Coop is the weak link. He's playing 15-25 minutes right now, and I'm not sure he deserves it. His shot just isn't there, he's not moving his feet on defense so he ends up committing fouls. He's just not playing with a lot of confidence right now. In my opinion, Hale should be getting his minutes. The season is in pretty bad shape right now so I don't see a big risk in giving Shannon more minutes. If he can consistently stretch the defense with his shot, this team could take a step forward. They've got to do something.

I agree. Sit Cooper. He's a scrub. Guy's like Shannon Hale, and Algie Key could really help this team if they got some of the minutes Coop was getting to throw up bricks.

I saw the Club MTV tour there back in '91 I believe. Easily the worst concert I ever saw... with acts like Geraldo, Color Me Badd, Bell BivDevoe, and C&C Music Factory.

Just thought I'd throw that in to sidetrack us from this so far disappointing season.

Sigh. He's not a scrub, he's just struggling for some reason. Remember, he averaged 10 a game last season. Hopefully he can figure things out, but for now, in the best interest of the team, I think he should see a decrease in minutes.

One minor correction to DJC's observations, I think Nick was 1 for 9 from the field in the first half. As in years past, he simply MUST hit from a better percentage within 6 feet if we are going to have a chance to win.
This game was very difficult to watch (and actually is the first time I've seen our team play all year I think). I hope Moussa Guyae is happy, because we realy could have used him on defense Saturday night.

Yea, that probably was the first time you have watched us play this year, and you probably have never watched Moussa play if you think he would provide any value to any major conference CBB team.t

That's correct. That bit should have read early in the second half. I disagree regarding Moose though. Whatever little help he gave us on defense, was more than completely negated by the fact we were playing 4 on 5 with him in the game on offense.