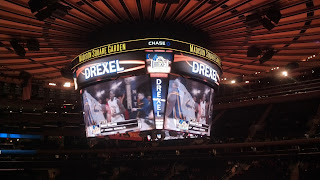 I apologize for the delay in posting this recap.  I flew back early the next day and went straight to the iron bowl.  I'm sure you can understand that I didn't feel like writing about this disappointing basketball loss when I got back.

Most of what I have to say about this game has already been said.  As I feared, we came out flat against a good team that was fired up to be playing an SEC team.  We had no answer for the zone.  It's no secret that we can't shoot and their front court shut us down when we drove to the basket.  We only scored 21 in the first half.  I understand it's difficult to get up for Drexel playing in front of about 250 people after battling Duke 2 nights earlier, but this is one we had to have.

We played much better in the second half, and was able to get to the free throw line where we actually shot fairly well.  Retin, Releford, and Jacobs all had good games.  Algie Key added 10 points.  Releford had 10 turnovers, which is way too much.   I suspect until someone figures out how to shoot from the perimeter, we were 4 from 15 from 3 point range in this game, we can expect to see a lot of zone from our opponents.

Our inability to finish close games is disheartening.  It reminded me a bit of the loss to LSU in Baton Rouge last year.  We had the lead and the ball with 42 seconds left, but turned it over (it looked like there could have been a foul called on the steal), and Drexel tied the game.  We had a timeout, didn't call it, and missed a shot at the buzzer.  There was another situation in one of the other overtimes where we had the last shot, had a timeout remaining, and forced a contested shot rather than drawing up a play.  It seems that Coach Grant has more confidence in his team's ability to make something happen on their own than his own ability to draw up a play that will give us a good shot.

At the beginning of the game, there was probably only 1,000 or so people there, but of course by the end it was packed with all of the Arizona and Duke fans showing up.  The whole arena was rooting against us as we had to play from behind each overtime, and they were ready for the big game to start.  I originally planned on sticking around for the Arizona-Duke game, but I was so disgusted with this loss, plus I had an obnoxious douchebag Duke fan sitting next to me, so I decided to split after we failed to score on the offensive rebound from Jimmie Taylor's missed free throw.

I've seen a lot of people criticizing Coach Grant for smiling after the game.  Obviously, I could not see his expression, but I would not read too much into that.  Keep in mind Coach Grant knows Drexel's coach very well from their time together in the Colonial Athletic Conference.

Up next, the North Florida Ospreys come to Tuscaloosa for a 7 p.m. tipoff Wednesday night that will be televised by CSS.  It's a game we should win, but as Mercer and Tulane proved last season, we aren't good enough to take games off.  Hopefully the team will be ready to bounce back from this disappointing trip.
Posted by DJC at 4:07 PM

Smiling after a devastating loss when your team is already not playing to its potential is not OK. I'm sorry, it's just not. What if Coach Saban had smiled after that disaster on Saturday? That would have went over well....

Final: UAB 63 UNC 59
A second year coach who makes a 1/4 of what Grant makes, and has a 1/4 of the experience that Grant has currently has by far the best program in the state. That just should not happen. Have to think that only adds to the pressure on CAG.

I went to that game. A great win for UAB and Haase is doing a great job there. UNC looked very unmotivated in the first half. They played better in the second half but it wasn't enough.

CT, the pressure is not on CAG. it's on the program, the athletic dept. if there's anything tuscaloosa can't stand, it's to be shown up by b'ham. this can do nothing but help haase on the recruiting trail. let CAG lose a few recruiting battles over high profile recruits and something will be done.


from here on out, very time someone makes an excuse for CAG, fingers will point to the NE.