With the game on the line, we played like the pink, and now our season is in the stink.  The team played hard and battled, but didn't make the plays in crunch time and lost yet another close but winnable game to drop to 5-5 on the year.

I thought we were tight to start the game.  We had several turnovers in the first 10 minutes of the game, and Wichita State was able to beat us back down the court for some easy baskets to build a 7-0 lead.  Cecil Hurt tweeted that we had 10 turnovers in the first 10 minutes, but according to ESPN's box score we only had 9 at halftime, and the official box score showed us only having 9 for the entire game.  Regardless, the point is we were sloppy with the ball early, but once we settled down we did a much better job of holding onto the ball.  Most of the early turnovers were the result of our forwards losing it on the drive or the bigs not catching the ball or making bad passes.

Releford had a great game in his return.  He only had one turnover, and his 22 points kept us in the game.  We were able to scrap back from the early deficit and trailed by only 1 going into halftime.

Wichita State is not significantly more talented than us.  They aren't bigger, and aren't really any faster or more athletic overall.  They won this game with their physical and mental toughness.  Whenever we would make a run or even take the lead, with the crowd into the game, they did not stay rattled for long.  They shot a ridiculous 92% from the free throw line, and while we shot a respectable 73.7%, we were only 6 of 10 in the second half and we missed some crucial ones down the stretch. 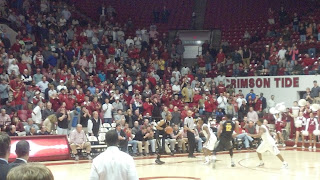 Physically, their front court plays a lot bigger than their size.  We had no answer for Cleanthony Early.  Cooper did the best he could on him when he was in the game, but Early was just too big for him.  He was too quick for Nick and too strong for Taylor.  When we tried to front him, our backside defense was too slow to help.  When we switched to a zone, we couldn't block him out.

I also thought Wichita State did a much better job of adjusting to the way the game was being officiated.  It was obvious that any contact in the press would be called a block on the defense.  So, the Shockers stopped pressing, and their ball handlers would initiate the slightest contact whenever we tried to trap and draw the foul call.  Towards the end of the first half we were getting to the line on our dribble drive, and I think Gregg Marshall picked up on the fact that we often weren't in the best position to score when we were drawing the fouls, and I noticed in the second half they started backing off and letting us shoot contested shots rather than going for the blocks in the paint.

I did not like the way this game was called, but again, we should have made some adjustments.  One play that sticks out in my mind is when a Shocker jumped to catch a pass and fell over, landing on what appeared to me to be a stationary Releford, and Relly was called for the foul.  Of course, if Relly just gets out of the way when he sees the guy falling down, it probably would have been a travel.

Also, the officials were preoccupied with our bench for some reason.  They warned the transfers a couple of times about standing up during play, as they are prone to do, and actually issued a bench warning on us.  Then late in the game one of the officials inexplicably came over and yelled at Coach Grant's son, who was sitting behind the bench minding his own business. 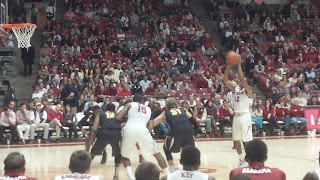 With about 3 minutes to go, Releford missed a free throw that would have tied the game.  That was his only miss from the charity stripe from the night, but it came at a bad time.  He made up for it by coming up with a huge steal at the other end, and passed the ball to an open Retin on the break.  Retin missed the layup, perhaps expecting contact that never came, and the Shockers beat us back down the court for an open dunk to stretch the lead to 3.  To me, that was the key sequence in the game, and pretty much sums up how this season is going.  The other big play at the end came when the Shockers got 3 opportunities in the final minute to prevent us from having the ball only down 1.

Cooper had a good game, and I would like to see him back in the starting lineup again soon.  He was 2 for 4 from beyond the arc and our second leading scorer with 14 points, but he did miss the front end of a big one and one late in the game.

Forget the NCAA/RPI ramifications for a moment, and see my paragraph in the recap to the Duke game talking about how this was a blown opportunity for the program.  This was another such blown opportunity.  Looking at the big picture, I said we need to win 2 of the next 3 going into this game.  That's still mathematically possible, but seems rather improbable at this point.  We are 5-5, and have 3 non-conference games left.  One of those could go either way, one is a "should win," and the other is likely a loss.  We are looking at either 6-7 or 7-6 going into conference play, and when you consider we play Mizzou twice, Florida twice, and @Kentucky, we can't afford to lose to many of the mid-tier teams if we hope to finish above .500.  We are looking more like an NIT bubble team than an NCAA bubble team, as a winning record is a prerequisite for the NIT.  Again, our schedule gives us plenty of opportunities to get back into the NCAA discussion, but 0-5 in big games isn't going to cut it.

The crowd was better than it has been, but still not what I would hope for a game of this magnitude.  I would estimate around 7,500 or so.  There were probably 300 or so Wichita State fans scattered throughout.  Despite the lack of students, it was a loud and enthusiastic crowd for the most part.   I don't think this game would have been as close in their house or on a neutral court.

Up next, the Xavier Musketeers come in Saturday night in a must-win game for Bama.  Tip-off is at 6 p.m. and will be televised on CSS.  If you have kids, ages 18 and under can get in for a dollar.  Xavier is 8-3, splitting games with Tennessee and losing in OT to Iowa and by 6 to USC on a neutral court.  This will be their first true road game.
Posted by DJC at 1:00 PM

Whatever the team had left in the season they put into this game. I don't expect the team to be very motivated Saturday with the season in the tank, and the outcome pretty much meaningless. That worries me, and based on recent history, expect Xavier to win.

Say what you will about Grant's abilities as a coach, but one thing that has been consistent with his teams has been effort. I seriously don't see this team mailing it in only ten games into the season. I expect they will play with a similar level of effort on Saturday and beyond. Whether it's enough, we'll have to wait and see.

I agree, but history also shows that they have hangovers after tough losses. I know we won't quit on the season, but can the team get motivated after such a tough loss? We will find out Saturday.