The road woes continue as we are still searching for our first win outside of Tuscaloosa following an embarrassing 21 point beat down by Mizzou.  After falling behind 7-0, we went on a 12-2 run to briefly take the lead and played them close throughout the first half, trailing by only 1 going into the second half.

Carl Engstrom had about as bad of a start as humanly possible and was pulled after only 3 minutes. Our centers bring nothing to the table.  The good version of Nick Jacobs' appearances are getting fewer and farther between.  Carl can't catch the ball and lacks physical strength.  Jimmie Taylor has the most upside but pretty much all he can do right now is block shots. I've been calling for Jimmie to get more playing time so he can develop, and he played 30 minutes and got 8 rebounds and blocked a couple of shots, but there was a stretch in the second half where he was really struggling and I would have considered giving a fresh Carl another chance, at least for a few possessions.

Frank Haith doesn't always get the most out of his talent, and he's certainly had his share of head scratching losses, but he had a great game plan for us.  Defensively, they double teamed Releford, collapsed the lane whenever he drove to the basket, and generally put an emphasis on stopping him, to the point they sometimes left the aforementioned bigs wide open under the basket.  We couldn't get them the ball, and even if we did, we all know more often than not they would not be able to actually catch it and score before the defense recovers.  Again, we were tentative on offense.  Levi looks terrified to shoot.

Shannon Hale played well, especially in the first half, but nobody stepped up in the 2nd half and Mizzou was able to run away with the game.   While Mizzou played great defense on Releford, holding him to 10 points and 1 of 6 from 3 point range, he also had a number of unforced mental errors.  Retin tried to step up, but while he's a great athlete, he gets out of control at times and is too inconsistent.   He did a nice job of getting to the line and making free throws, but he was a brick mason from outside and had way too many turnovers.

I was impressed with Mizzou's guards.  They handled our press very well and made good decisions with the ball, finding the mismatches especially against our man to man defense.    As the game slipped away, I didn't feel like we tried to make any adjustments.  It was obvious we couldn't score, but kept running the same sets and plays with the same lineups.

From what I gather on social media, the team did not arrive in Columbia until after 8 p.m. Friday night.  They were in a shoot around at 9:45 pm.  It seems to me that it would have made sense to get there earlier and give the guys a chance to get settled in. 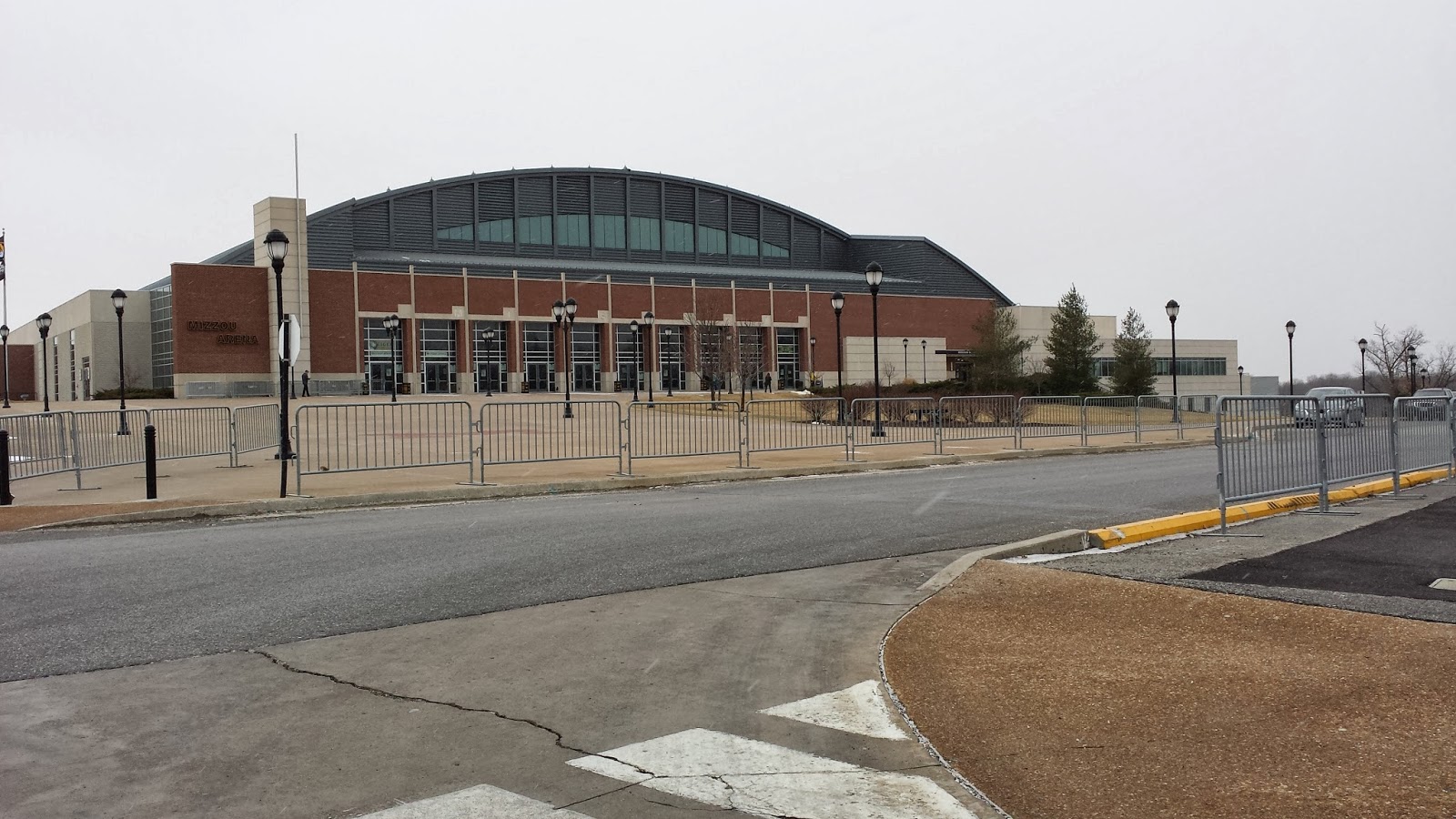 Mizzou Arena is a great facility that holds about 15,000.  I would estimate around 10,000 seats were filled.  Oddly enough, most of the empty seats were in the student section.  To the extent that we have a Kansas City or St. Louis alumni base, they did not turn out.  I would estimate no more than 20 Bama fans there, including the 15 or so friends and family of Trevor Releford.   The Mizzou fans were knowledgeable, attentive, and respectful for the most part.  The loudest cheers of the game came at halftime when a few members of the 2013 World Series Losers were introduced the crowd.  I booed, but managed to resist the temptation to start a "Let's Go Red Sox" chant.  For those of you who don't know, I'm a Chicago Cubs fan, as if being an Alabama basketball fan isn't frustrating enough.

The arena itself is one of the top 3 or 4 nicest in the SEC.  I didn't venture to the upper level, but I really liked the set-up and architecture.  It has a midwestern field house style, and an open layout that allows you to see the court from the concourse behind the baskets.  The concourses are wide and clean with plenty of concessions and restrooms.  The glass windows near the ceiling allow for some natural light to come in without causing a distraction on the court.  The scoreboard could use an upgrade, while it gives all of the needed information the quality and size of the replay screens is  lacking, but that's really my only complaint about the place.

Off topic, but the only people who had a worse weekend than our basketball team are the local meteorologists.  The weather forecast called for sunny skies and temperatures in the 40s Saturday.  While the sun did make a brief appearance following the light morning snow flurries, the long walk back to the car featured 30 mph winds and a mix of snow, sleet, and rain.

Up next, we return to the friendly confines of Coleman Coliseum to protect our longest active SEC home winning streak against the highly ranked Florida Gators.  It's 90s night, so put on those Crimson parachute pants and get there early for the 6 pm tipoff Thursday night, because Bama Basketball is 2legit2quit.

honestly crimsontider is right fire grant.our football team lost one game and everybody goes crazy!our basketball team loses who cares?don't you think these kids deserve better.you got the best football coach money can buy.but you can't do the same for your basketball team.GREEN,MITCHELL,LACEY, AND GRANT.Makes you wonder who had the problem?