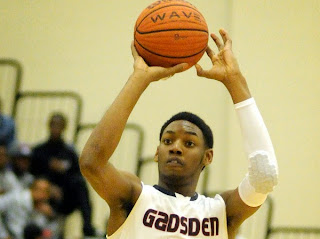 
So, at one point, Gadsden City had potentially 3 D-1 prospects on the same basketball team. Garrett and the others all transferred out, including Rakim Lubin (UConn signee), and 7'0" rising senior Trey Kalina (uncommitted as of yet)....
Posted by Hville at 2:16 PM

Jackson Davis is set to announce tomorrow afternoon. He was probably our top target in the late signing period, It's between Bama, Butler, and Rice. He also reportedly had an offer from Vandy, and was being recruited by Florida late. He cancelled his visit to Florida shortly after our last in-home visit, and moved up his announcement, so I am hopeful. He's from Lexington, so you would think being the only SEC finalist works in our favor.

It's really close between us and Butler. I really hope we get him. There are also rumors that Tony Pujol has been let go, which would appear to be true based on him removing all affiliation with UA from his twitter account.

we cut loose an asst. in a critical recruiting period??

All indications are that Jackson Davis is going to Butler. I noticed late in the season that Pujol and Grant seemed to butt heads a few times, not sure if any of that is related to him apparently leaving. I have no problems with making some staff changes after the worst season in decades.

Missing on Davis hurts. We had the last visit, and all indications are that he had a great time. Up until yesterday, I thought we were going to get him. Grant and Brannen couldn't finish. It's been three years and we still have not found anybody to replace Jamychal Green.
FB: I wouldn't worry about losing Pujol during the recurring period. Brannen and Pettway are the assistants that do most of the recruiting, anyway. One things for sure, CAG really needs to make a great hire in replacing him.

ok. we're chasing a "big time" recruit. our "top target". in the weeks and days leading up to signing day, we can an asst. coach.


i'm sure it's just coincidence.


look, no question he needs to shake things up. but other programs are already calling him a lame duck. this could have happened at a better time, after the late signing period.

With Kentucky bringing back nearly their entire team and adding in a few more 5 star recruits I expect that the SEC next year will again be Kentucky + Florida and the rest. Hopefully we can land somewhere in that 3-6 range.

Well considering it hasn't been announced yet, my guess is that they have been waiting until after the late signing period to announce this.

ct, if we know, it's common knowledge.