First of all, I apologize for the delay in getting this recap posted.  Between the football game and work obligations, I've had a lot going on this weekend.  Along those lines, the recaps for the two games this week may be abbreviated and/or delayed for the same reasons.  Bobbyjack simply doesn't pay me enough to make this a priority, so if you have any problems with that, take it up with him. :)


The complaint department is closed for the time being after the season opening win.  Jimmie Taylor picked up 2 early fouls as Towson jumped out to a 4-0 lead.  With Riley Norris unexpectedly forced into the game to play center, we were a little out of sync the first few minutes.  Once the team settled down, it was all Bama.

The offense was fun to watch, with lots of off-ball screens, back door cuts, and open looks from the perimeter.  Justin Coleman started at pg again and he does not look like a freshman at all. At times, it's easy to forget that he's only 5'9".  His stats don't tell the whole story, he scored 9 points, and only had 3 assists to one turnover, but his combination of quickness and ability to see the whole court, really puts us in good positions offensively.  He was 0 for 3 from the 3 point range, but he's got a nice shot and will shoot a solid percentage of the course of a season.  Defensively, he plays bigger than his size, has great fundamentals evidenced by the fact he's always moving his feet to maintain position, and his quick hands give him the opportunity to deflect some passes and get some steals.

Getting Tarrant and Obasohan back really helped.  The additional depth at the PG position allowed us to handle the ball much better.  We only had 8 turnovers in the game, and we were also able to press a lot more. 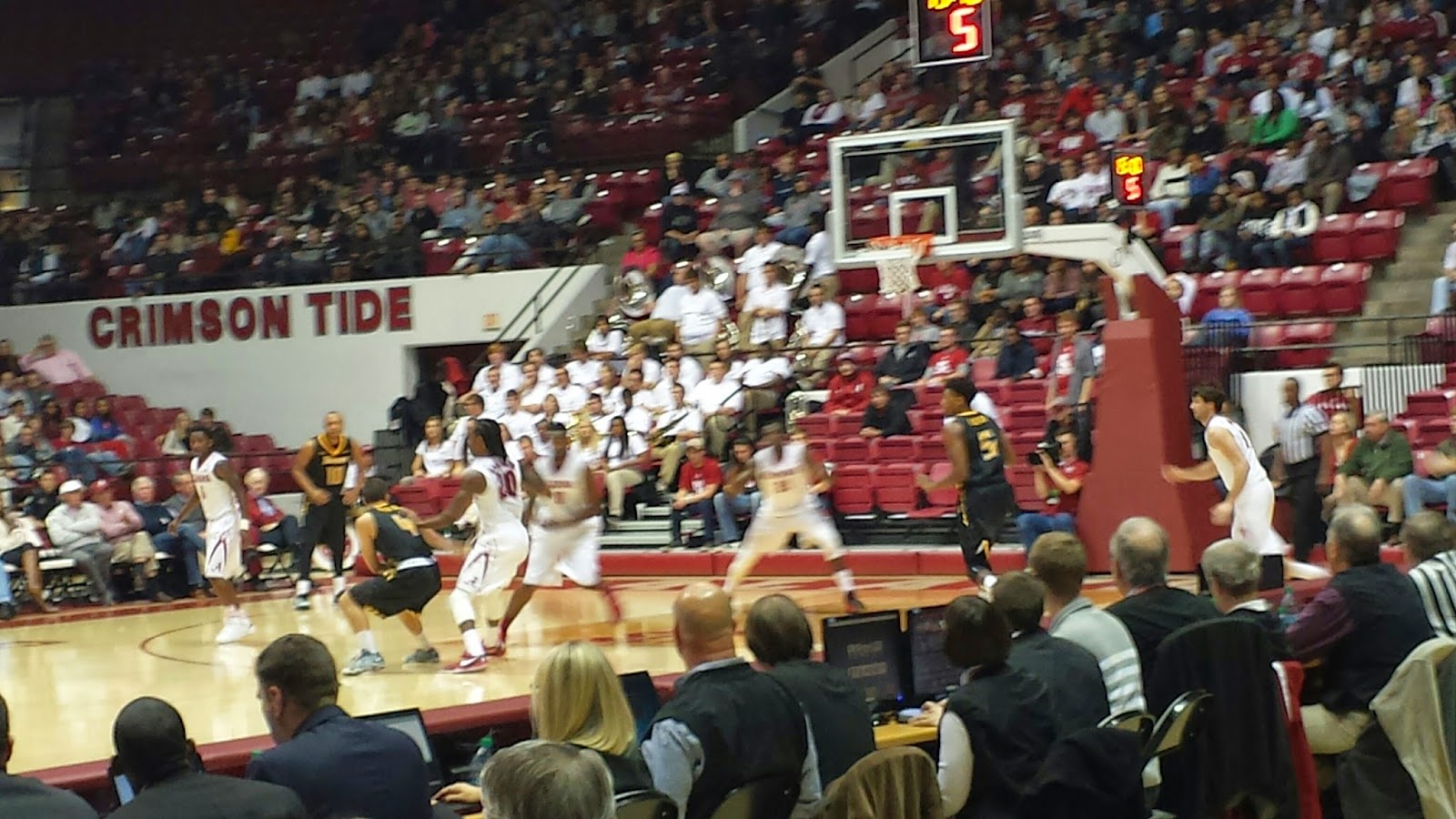 In fairness, I don't think Towson is a very good team.  Their big men were not particularly skilled, so they were not able to take advantage of Kesson's absence and Taylor's foul trouble.  They had a few decent shooters, but the ball handling skills of their guards left a lot to be desired.

We had 4 guys score double digits, with the captain Levi Randolph turning in a double-double with 15 points and 10 boards. We even made our free throws, going 17 for 19, with both Tarrant and Levi going 5 for 5 each.

The crowd was a little disappointing for it being a double-header on the night before a huge football game.  I would estimate approximately 3,500 or so were in the house.  I regret that I was not able to catch any of the women's game.  Our girls beat Florida A&M 60-44 earlier in the evening.  I was hoping to at least catch the second half of that game, but I was nearly an hour later leaving work than I had hoped for, and it took me over 1.5 hrs to drive from Birmingham thanks to idiot motorists and the AL Dept. of Transportation's genius decision to go ahead and start construction on I-59 before the two heaviest traffic weekends of the year.  Anyway, the women play tonight (Sunday) against Duke at 7 p.m. on SEC Network.  I'm looking forward to getting a look at Coach Curry's squad.

Up next, the Western Carolina Catamounts continue their tour of the SEC with an 8pm tipoff in Coleman tomorrow night.  They are coming off a 10 point loss to $tate in $tarkville, for whatever that is worth.  The game will be televised on SEC Network if you can't make it to Coleman.