UCLA won the tip-off and scored on an alley-oop dunk to start the game.  After that, the Bama defense held the Bruins to just one made fg over the next 14 minutes, building a 20-5 lead.  While UCLA did not help their cause with a handful of unforced errors, most of the credit for the first half lead goes to the Alabama defense.  UCLA only got a few open looks, and none from inside the perimeter.  More importantly, Jimmie Taylor, Rodney Cooper, and Michael Kessens controlled the glass and limited their second chance opportunities. 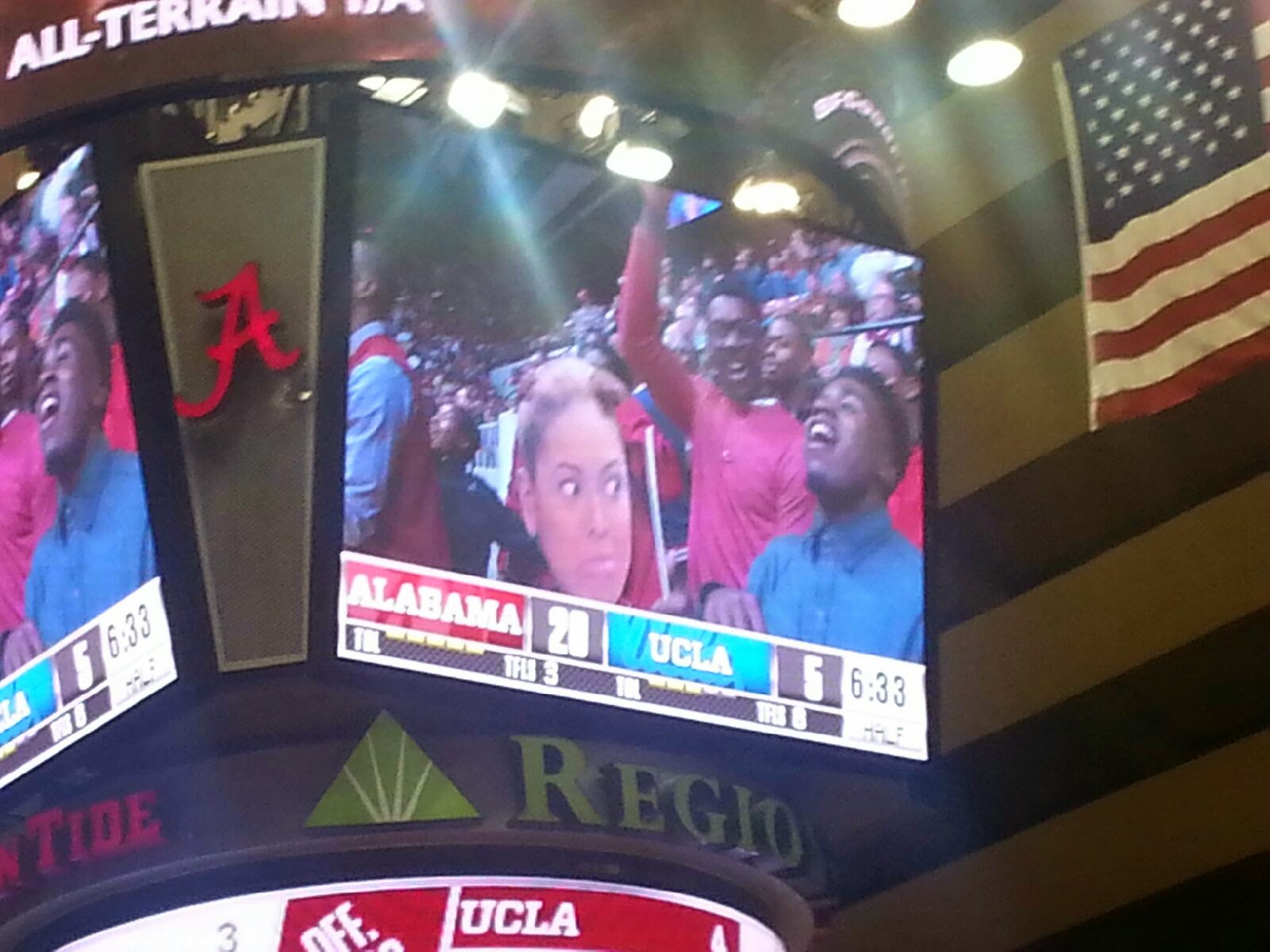 I thought we actually played fairly well offensively in the first half.  We had good spacing and ball movement for the most part, and had a lot of open, high percentage shots that just didn't fall.  We weren't very good at finishing around the basket, and unfortunately, putting the ball through the hoop is kind of important in basketball.  We probably should have been up 15-20 points at the half, but instead only took a 29-17 advantage into the locker room.

Steve Alford and UCLA made some nice adjustments at halftime.  They worked the ball to their athletic bigs in the post and quickly drew Jimmie Taylor's 3rd and 4th foul.  Taylor did a great job of defending the rim when he was in the game, but we really struggled to stop them in the post when he came out.  We finally made the proper adjustment of switching to a zone, but not before UCLA was back in the game.

On the offensive end, we had no real inside presence and they started hedging the off-ball screens and bumping our cutters, which slowed the offense to a grind.  For much of the second half, we were back to the old "high ball screen with 5 seconds on the shot clock" offense.  Thankfully, Ricky Tarrant went off for 24 points.

I was afraid we put Taylor back in the game too early with 7 minutes left, but he played solid defense the rest of the game without fouling.  Levi Randolph didn't have one of his better games, and he was uncharacteristically bad from the free throw line most of the night, but he came up big when needed.  I thought it was critical that we never allowed UCLA to get the lead.  Levi made an incredible contested jump shot to put us up 2 with just under 2 minutes to play.

I would still like to see a little bit more leadership in key situations in tight games.  With the lead and about a minute or so remaining, Taylor turned the ball over trying to pass to Kessens on the perimeter.  Tarrant and Levi cannot allow that to happen, somebody has to go get the ball in that situation.

We overcame another poor shooting night, 4 of 22 from 3 point range and only 18 of 30 from the line, but Ricky and Levi stepped up as we made 8 of our final 10 free throws to finally put the game away.

We had trouble getting the ball in bounds at times, which led to only having one timeout remaining at the end of the game.  I thought we used that timeout too early, with a 3 point lead and around 30 seconds remaining.  If UCLA would have scored there, we could have been in big trouble if we couldn't get the ball in bounds.  To Coach Grant's credit, it worked out as the team executed the man to man defense he set up, switching on every screen and forcing a bad shot from UCLA.

This isn't a traditional national power UCLA team, but I also don't think they are as bad as many are making them out to be.  This was their first loss to a team outside of the top 20.  Yes, they looked horrible against Kentucky, but Kentucky is going to make a lot of decent teams look horrible.  They don't have much depth, but they have some talented young players, some decent bigs, and are well coached.  Hopefully they can continue to develop and this will ultimately be a top 100 win for us. 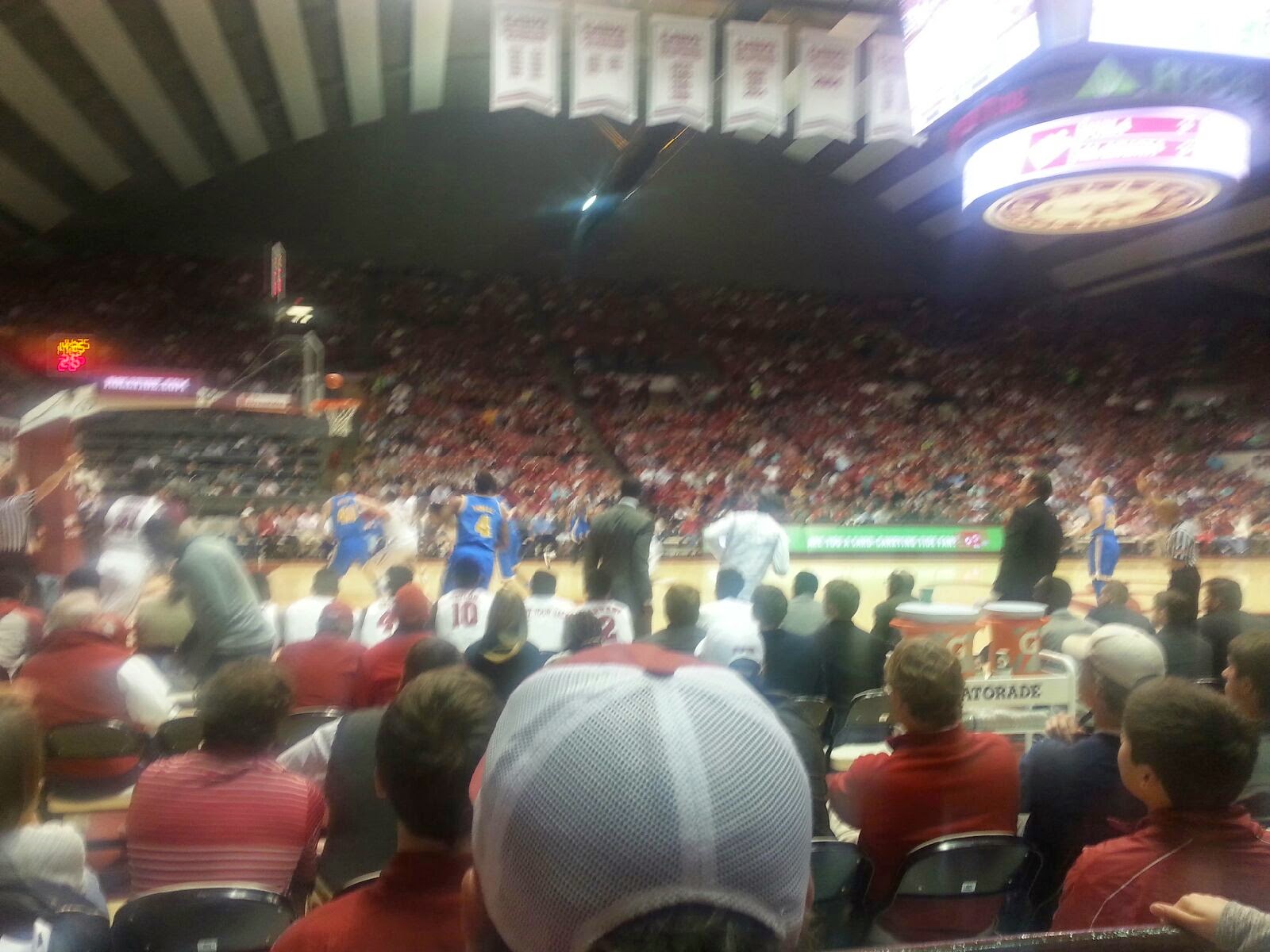 The crowd was great, I would estimate close to 13,000 actually showed up, which is fantastic for a Sunday night during the winter break, even against a somewhat down UCLA team.  The Bruins probably had a couple of hundred fans scattered throughout, honestly I think we had more fans at their place last year than they brought here.  Several former players were in attendance, Eric Washington was recognized on the video screen, Chris Hines was sitting behind the goal with a group of high school aged kids and they all appeared to be having a blast, and Andrew Steele was also there.  There were a lot of school and church groups in attendance, whoever did the marketing for group sales for this game apparently did a good job.  Justin Coleman's church group was there and sitting near us.  The crowd was loud and stayed till the very end, hopefully seeing the home team win a close game will make some of those folks want to come back.

Unfortunately, the arena was apparently severely understaffed.  We arrived 30 minutes or so before tip-off and immediately noticed the long lines for tickets and concessions.  I understand many people weren't able to purchase their walk-up tickets until midway through the first half, and based on comments from people sitting around us, the lines for the concession stands were generally over 40 minutes.  I never patronize the Coleman concession stands because in my experience they are overpriced with limited choices of very poor quality.  Parking and post-game traffic is a complete cluster due to a number of factors including but not limited to: construction of the baseball stadium, incompetence of those directing traffic, and those stupid shuttle buses clogging the flow of traffic.  They need to rectify some of these issues if we ever expect to draw large crowds on a regular basis.

Up next, the North Florida Osprey's come to Ttown for a 6 pm tipoff Friday night for the last non-conference game of the season.  UNF upset Perdue, so we will need to stay focused if we want to avoid our annual season-killing non-conference home loss.  The game will be televised on SEC Network.  If your travels back from the Sugar Bowl take you through Tuscaloosa, there's no reason not to stop and take in the game.  Happy New Year and Roll Tide.

We have got to get back to playing offensively the way we were earlier in the season. I don't understand why we can't ever do both well. As for the game, it was ugly, but UCLA is one of those elite programs (even when they're down) that you can't complain about after beating. It's like when we beat Kentucky's NIT team a couple of years ago. They may have been down, but beating a name like that is never something to complain about.


This team has a lot talent. We have shooters. Big men are still an issue, but I like what i've seen from Taylor lately, and Kessens has potential. Unlike CAG's previous teams, they have depth as well. There is absolutely no reason this team can't put it together. If we finish outside the top five in the league and miss the NCAAT, then we have underachieved. We probably need at least 12 SEC wins to get there, (maybe 11 if we avoid bad losses and pick up some top 50 wins) but that should definitely be doable with the state of the league, and the talent that we have.

Good win. I thought we would get crushed on the glass but we managed to kind of shut down their leading rebounder. I was surprised how bad UCLAs RPI was considering all their losses have been to quality teams. They clock in at a lowly 112 while we somehow are a respectable 42. We are their worst loss of the season, all their other losses are 34 or higher in the RPI. Sadly, they are currently our best win, and having no wins over any top 100 teams is an issue. Hopefully we can best some teams in conference that we aren't supposed to. We will have plenty of chances as we have 11 top 100 RPI conference games. The SEC is very deep this year. Go ahead and count up the "easy wins" there aren't many. Miss State is probably the worst team in the league but we only play them once, Mizzou is also pretty bad but again we play them just once. The schedule gods were not kind to us this year in the league. Playing Kentucky twice sucks, they may go undefeated. If we can beat UNF on Friday and make it out of the non conference at 10-3 then making the tournament is attainable for this team but it will be extremely difficult. The first conference game against A&M is a must win. We then need to split the back to back road games at SCAR and Tennessee before coming home and losing to Kentucky. The road trip at Arkansas is probably a loss but the next two games at home vs the barn and Florida look winnable. Then we go lose at Kentucky. The next game against Mizzou at home is very winnable which is followed by back to back road games at LSU and State. We cannot lose at state. They are terrible. LSU on the other hand is very good. They are big and strong and will probably thrash us. I'm not looking forward to that one. Thankfully we only play them once. The two things that are immediately obvious when I look at the SEC this year is the amount of quality depth and the lack of respect it is getting nationally. There are probably 8 teams which could make it to the NCAA tournament, and everyone outside of Mizzou and State has at least one win over a quality opponent. Hell, even the barn beat Xavier. SCAR who has been a bottom dweller in the SEC has two 20+ point wins against power 5 conference teams. However, the voters can't seem to see past Big Blue and thus the conference has no other ranked teams. The way I see it though, this is the deepest the SEC has been in years. We should get alot of teams in this year, in reality the number will probably be around 4. For Alabama to make it into the NCAAs we probably need to go 11-7 or 10-8 in the conference and then win 1-2 more games in the SEC tournament. That would put us squarely on the bubble but I think thats more than anyone hoped for at the beginning of the season. That being said, having a winning conference record this year will be extremely difficult and I don't know if we have the depth especially inside to hold up all year, Even one injury would be devastating. But for now, I'll take 9-3 and it's nice to still have everything ahead of you at this point in the season instead of knowing it's already over like last year.