Alabama jumped out to a quick lead before falling to the Xavier Musketeers 97 to 84, but the game did not seem as close as the final score.  Our team played fairly effectively in the middle of the first half while Xavier's big man sat on the bench with two fouls.  Then Bama's outside shots refused to fall while they could not work the ball underneath the basket.  We had no answers for their zone.  Here's a Box Score.

Please see the comments to Bobby Jack's "Fresh Meat" post previewing the game for real analysis.  I was flipping back and forth between our game and the ACC Championship football game. 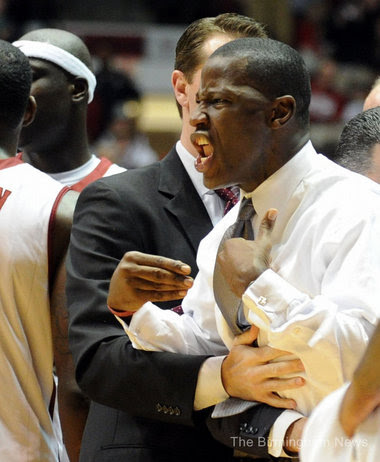 The one thing I liked most about this game was when Head Coach Anthony Grant (finally) drew a technical foul after protesting a charge called against Riley Norris after a Musketeer "flop" caused an official to waive off one of the few inside hoops I saw us score.  The official might have made a good call.  I don't know.  The camera angle we had did not allow me to see whether any real contact was made.  It seemed to me the official who blew the whistle suffered the same disadvantage, and I suspect that is why Grant was so upset with the call.  It really was good to see Coach Grant defend his player so vigorously that he drew a zebra's ire.  I hope his passion continues and filters its way into the team.

As has been noted below, our kids are not playing particularly good defense right now, but they still are much more fun to watch than they have been recently.  I hope to make my first pilgrimage to Coleman Coliseum next Saturday/
Posted by Alias at 4:06 PM

Very disappointing game. This was our best chance to get a quality road win in the out of conference schedule and we weren't even competitive. The defensive effort must improve.
Once again, I missed the first 5 minutes or so of this game, thanks to the Taco Mac near the Georgia dome being run much like everything else in Atlanta, that is to say a giant clusterfuck. I called over there Thursday and was assured they would be able to put the game on. I arrived after the football game and asked one of the servers to put it on, and they did so, but the Marshall-Penn State game was not yet over. About the time our game was starting, they flipped that TV over to the Baylor-Kansas State game. When I complained, I was told, "give me a minute and we'll get it on somewhere." Five to ten minutes later when I asked another server, a little more adamantly this time, she said "all of the TVs have been claimed." Keep in mind, there were 2 TVs right behind me that were still on CBS from the football game and were showing 60 minutes or the like. I pointed this out and requested a manager, who came out and finally put the game on. The fact that it required such a battle just to get the game on, in a bar FULL OF ALABAMA FOOTBALL FANS, probably speaks more to the ultimate futility of this program than our swiss cheese defense.