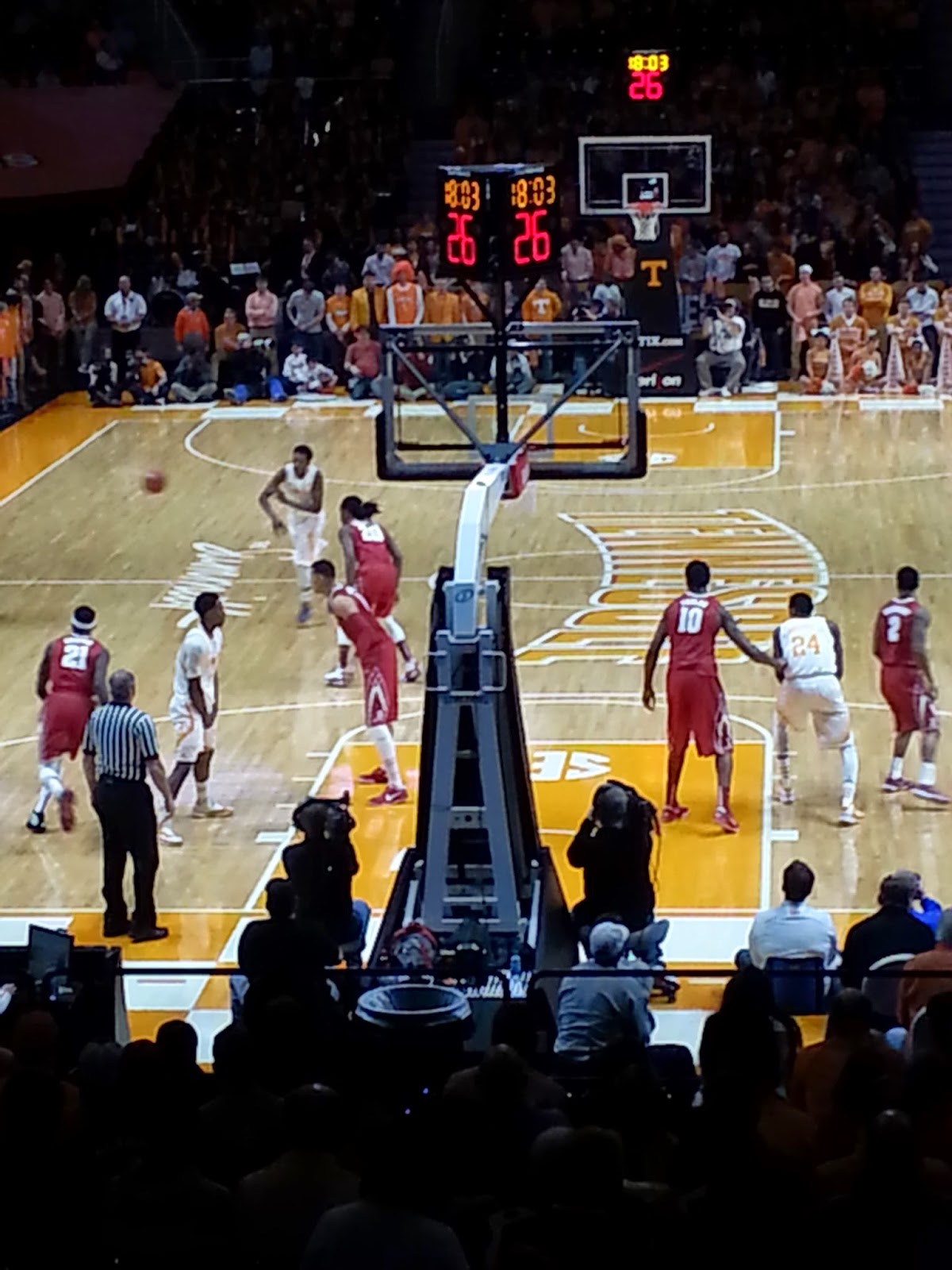 For the first time in almost 2 years Alabama won a true road game, and did so in convincing fashion, holding Tennessee to their lowest point total in the history of Thompson-Boling arena.

Both teams played a lot of zone in the first half, and I was surprised that the Vols pressed early.  With only 9 players and a history of foul trouble, that was an unexpected decision by first year coach Donnie Tyndall.  We did a good job of breaking the press but did not have much success in the half court against their zone.  Fortunately, our own zone defense was even better, or arguably Tennessee's offense was even worse.

Coming into the game, I thought the key to victory would be Kessens taking advantage of their lack of size in the post.  While Mike helped us out with some rebounds, he did not have a great offensive day.  Tennessee had a good plan to prevent him from getting the ball.  They fronted him in the zone and we weren't able to create passing lanes or go over the top.  I thought we settled for too many jump shots in the first half instead of attacking the basket on the dribble drive.  We were only 3 for 11 from downtown in the first half, and did not make a single trip to the free throw line.

Jimmie Taylor got a thunderous dunk at the buzzer to stretch the halftime lead to 5 and give us momentum going into the locker room.  As bad as Tennessee was playing, I felt we should have had a bigger lead at that point.

Tennessee's Josh Richardson was the best player on the floor, and he took over the game to start the second half.  The Vols took the lead, with Richardson having scored over half of their points.  The game was tied at 36 with 12 minutes left.  I told my gf at that time that I thought we had less than a 5% chance of winning the game.  We weren't playing aggressive enough on offense, Donaldson was heating up, and we have a history of melting down late in close games on the road.

I could not have been more wrong.  Tennessee did not score again until they got a garbage basket in the final minute, long after the outcome was determined.  Most of the credit goes to Ricky Tarrant for shutting down Donaldson.  The coaching staff also had a great scheme.  It was obvious that a lot of UT's players were basically standing around waiting on Donaldson to win the game for them.  Anytime Donaldson got some room from Tarrant, somebody else was coming over to help.  We forced him to pass, and his teammates could not make open perimeter shots.  Taylor, Kessens, Levi, and Cooper also rebounded the ball well, generally limiting Tennessee to one shot down the stretch.

Taylor had a nice stretch as we re-established the lead, scoring 13 points and somehow making 3 of 4 free throws with that screwball shot of his.  Tarrant added 14 points including a couple of nice base-line inbound plays where he threw the ball off of the Tennessee defenders' backs.  Cooper was awesome, putting them away with 3 of 5 shooting from 3 point range while leading all scorers with 17 points, 5 rebounds, and 5 assists. 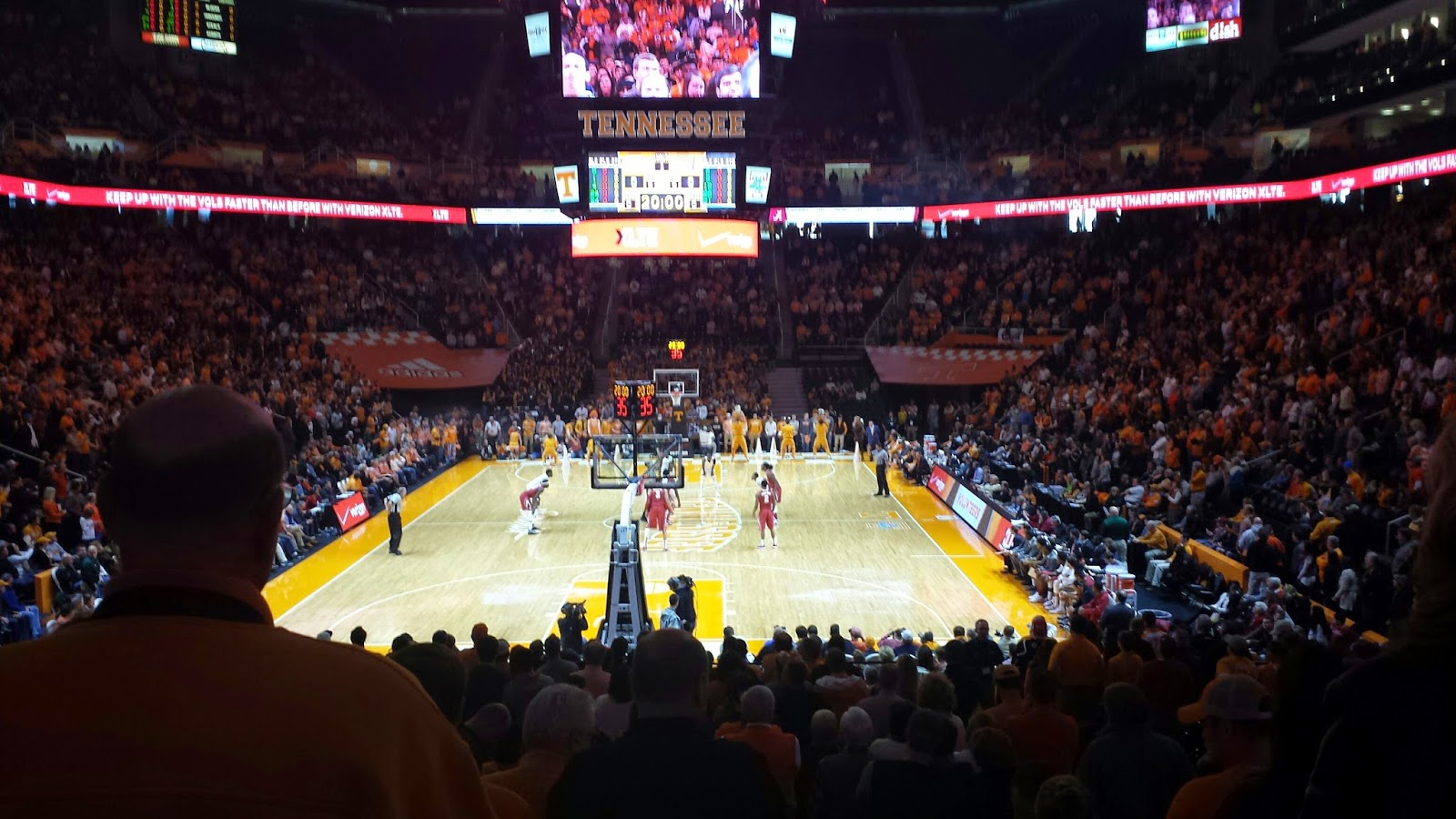 They had a solid crowd, I would estimate about 12,000 were there in the 22,000 seat facility. There were probably 300 or so Alabama fans scattered throughout.  Thompson-Boling arena is an eyesore on the river from the outside, but is actually very nice inside.  The slow pace of the game and the struggles of the home team created an atmosphere that was not overly hostile for us.  The loudest cheers of the day came when they showed football coach Butch Davis on the video screen.  Bill Battle was in attendance, giving me some hope that maybe he's taking up an interest in basketball, although I suspect it was just an excuse to get back to Tennessee for him.  The Tennessee fans were all very accommodating and knowledgeable.

Up next, the brutal January schedule continues with a road trip to South Carolina Tuesday night for an 8pm central tip off.  The game will be televised on ESPNU.  Let's keep it rolling.

I'm hoping back to back losses and a 9pm eastern tip off means that the atmosphere will be nonexistent at South Carolina. This is another winnable road game but we will need to play just as well if not better than we did on Saturday. A win in Columbia would set the stage for the biggest game in Coleman in several years.

It's already going to be the biggest game in Coleman in several years. A win at South Carolina would add to that, but it's not a must win, because we won Saturday.