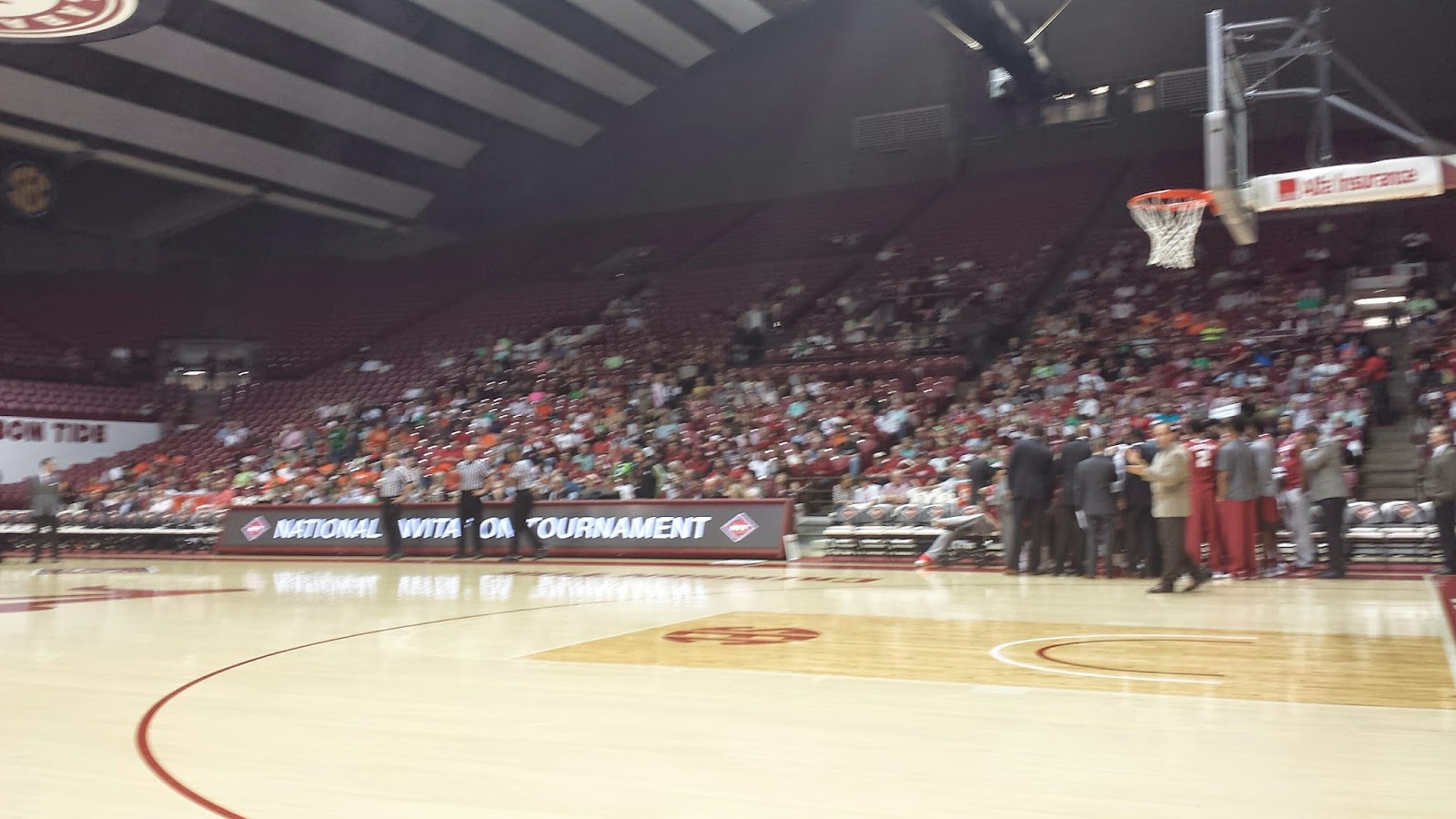 I will admit, after losing to Florida in the SEC tournament, I really didn't want to go to the NIT.  When I saw we were selected as the 6 seed Sunday night, my initial thought was, "I guess I should go to support the players/program," but honestly I viewed it more as a chore more than anything.  Well, after watching that performance last night, I'm now all-in for this NIT run.  If we make it to the finals, I will be in New York.  Hell, if I didn't already have plans this weekend, I would seriously consider flying down to Miami.

It must have been a difficult last couple of days for the team.  They are close to Coach Grant.  Say what you will about Coach Grant's lack of success, but this team always played hard for him.  One had to wonder how the team would react without him.  Not to mention what's left of the coaching staff could naturally be distracted by the uncertainty of their future.

Illinois took a 4-3 lead with 18 minutes left.  Over next 8 minutes, we ambushed them like nothing I've seen in Coleman in a long time.  We went on a 20-0 run.  We looked like Kentucky playing against Miles College.  We forced turnovers, drained 3s, had awesome spacing on offense with crisp ball movement, communicated like a well-oiled machine on defense, blocked shots, rebounded.  For those 8-10 minutes, we literally dominated every facet of the game.

Even though we had a couple of shot clock violations in the second half, I think the 30 second shot clock helped our offense.  It also helped that Illinois played a horrible game.  They missed assignments on defense on at least 3 occasions leaving us wide open, their offensive sets were generally predictable, we beat them to nearly every loose ball in the first 30 minutes of the game, and even when they did get a good look, sometimes from within 4 feet, they still couldn't score.  Their coach is on the hot seat himself, and I wonder how motivated they were to be playing on the road in this tournament.  To their credit, they did show some fight in the second half.

It was great that Levi and Cooper got to leave Coleman Coliseum on a winning note after all (in all likely-hood, there's still an outside chance we could host a game against St. Francis in the quarterfinals).  Both played aggressive and smart at both ends of the floor.  Levi ended with 20 points, 7 rebounds, 5 assists, and 0 turnovers.  Cooper added 19 points and 4 rebounds.  Retin had a great game with 15 points and 7 boards, and Justin Coleman made the most of his 17 minutes going 3 for 5 from downtown to score 10.  Jimmie Taylor was also well on his way to another great game until he had to leave early in the 2nd half with cramps.  With Jimmie out of the game we had some troubles rebounding in the second half, Illinois had a couple of trips when they got 4 or 5 shots, but after building a 60-30 lead it's hard to find much to complain about.

Coach Brannen and staff did an excellent job under very difficult circumstances.  Obviously their futures are very uncertain right now.  While I've noted that it appears from my perspective that Coach Brannen has butted heads with Coach Grant a lot over the last couple of years, they have been together for a long time.  As Coach Brannen walked onto the court and humbly walked off at the end of the game, you could clearly see this sadness in his eyes.  This is a great opportunity for him to showcase his talents, but he's obviously not taking any joy in Coach Grant's dismissal.  He's a lot more animated in his in-game coaching than Coach Grant.  I thought he did a good job of making adjustments when necessary.  He did waste a timeout challenging a hard foul that ultimately was not ruled to be intentional.  From my view at real speed, it looked like Retin may have been clothes lined, but it wasn't clear and I'm not sure I would have wasted the timeout with the big lead.  It was a nice gesture to use the timeout at the end of the game to substitute for Levi so he could get one final ovation.  I wish we could have done the same for Cooper and Dakota Slaughter.

The crowd was very disappointing, I would guess only 2,500 or so there, including about 200 Illini fans.    It would have been nice to have better attendance to showcase our program to prospective coaches, but given the 8 pm start, spring break week, and St. Patrick's Day, there were a lot of factors working against us.  That being said, if any prospective coach was watching that game, I don't know how they could not be excited about the opportunity to coach these players!  The general admission seating arrangement made for a more involved crowd that was very much into the game and supportive.  I was fortunate to be able to get floor seats, and was sitting on the front row in the corner by the tunnel.  The team looked very excited and happy after the game, especially the seniors.  Coop gave me a high-five on the way into the locker room.

Up next we travel to Miami to take on the hurricanes in a rematch of an NIT game that we won at Coleman a few years ago.  It's an early 10 am CT start.  Unfortunately, I will need somebody else to step up and post a recap, as I will be on my way to Arizona to watch some spring training baseball.  My ability to watch this game is dependent upon Southwest wifi connections, so I'm not very optimistic.

Note:  I've added a couple of names to the coaching candidacy list below based on rumors circulating over the last couple of days.

Battle sat and chatted with fans at halftime, a nice touch.
I work for Southwest. If you let me know your flight number, I'll tell you if it has wifi.

I should have noted that we saw Battle in the tunnel greeting the coaches and players as they left the court as well. I'm on 2714 if it's not too much trouble.

Unless there's a change in aircraft between now and then, 2714 BHM-HOU-PHX does have wifi.

Sweet. Pull some strings and make sure there's not a change in aircraft, and also make sure it will be sufficient to run the watchespn app. Thanks! :-)

I would have been there to support the team last night but work obligations kept me from leaving in time to arrive before the second half. It really was good to see the team having fun and enjoying some success.

Dayton comes back and beats Boise St. tonight due in no small part to the home court advantage's influence on the officiating. Boise absolutely got screwed in the end but it's a textbook case of what we all know is true.