Bama on the Prowl, Stomps the Owls, Alabama 77 Kennesaw State 64 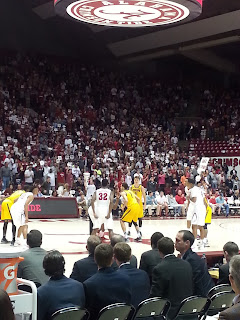 Bama was able to take advantage of their significant size, strength, and athleticism advantage to secure the first official win of the Coach Avery Johnson era.  Alabama took an early 15-3 game, and it looked as though it may be a route, but give credit to a scrappy KSU bunch for not going away quietly.

We attacked the basket early in the game to exploit the Owls smaller size, and we were able to get to the free throw line with some regularity.  Unfortunately, we do not appear to be a very good free throw shooting team right now.  We finished 15 for 27 after a putrid 4 of 13 in the first half.  We could have easily built a 20 point lead if we were somewhat competent at the foul line. 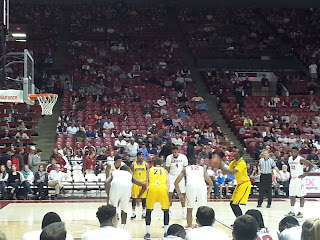 Dazon Ingram got the start at point guard and did a great job.  He had 16 points, 4 assists, and only one turnover.  He did a great job of finishing around the basket.  I was most impressed with his defense, I thought we lost a bit defensively when he came out of the game for Justin Coleman.

Retin quietly led the way in scoring with 18 points, and Shannon Hale had 13, although 8 of those came in the first part of the game.  Hale was inconsistent, and his turnovers hurt us a bit.

The lead fluctuated between 10 and 15 points for most of the game, but I never really felt we were in serious danger.  Kennesaw State managed to slow the pace down in the second half which seemed to frustrate our offense.  We had a 5 minute scoring drought, and at one point KSU made back to back 3's around an Alabama turnover cutting the lead to single-digits.  The team and crowd responded well and the lead was back to 14 a few minutes later.

Yonel Brown for KSU was amazing.  For the most part, we played solid defense against him, but he still scored 34 points.  He looked like a poor mans Steph Curry out there.  Despite being only 5'7" he scored from anywhere on the floor, with a hand in his face, regardless of whether his feet were set or even facing the basket.  If the Owls could get him just a little bit of help, they wouldn't be a bad team.

Overall, it was a good win despite being a little sloppy at times.  We will need to clean up the turnovers and do better from the free throw line if we expect to win some of our tough upcoming games.  We only shot 4 of 17 from three point range, and that won't cut it against bigger teams.  We will find out what we have over the next couple of weeks, with tough games at Dayton, a solid Louisiana-Lafayette team coming in next week, followed by the Thanksgiving tournament in Orlando.

There was a solid crowd, I would guess about 10,000, the most I can remember for a home opener in some time.  It was mostly all Alabama fans, as I didn't see or hear more than a handful of KSU supporters.  The atmosphere was great, and most people stayed till the end.  We need to keep this up all year so recruits will know that we are serious about supporting Coach Johnson and this program.

Up next, we go to Dayton for a noon CDT tipoff as part of the ESPN 24 hour tip-off marathon.  It will be a very tough test, and also a very long lunch break for some of us Tuesday.