Before I get into the details of this game, let me say that first and foremost our thoughts and prayers are with Anton Grady, the Wichita State player who is hospitalized after leaving the court on a stretcher with an apparent head injury with 3 minutes remaining in the game. 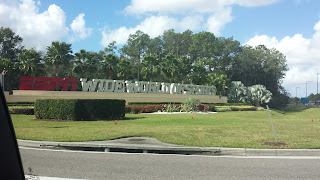 For the first time in 22 tries, after three and a half years, we finally defeated a ranked opponent.  It was a huge upset, as we were 10 point underdogs coming into the game.  Now, before we get too excited, please note that WSU is now 2-3, will not be ranked in the upcoming polls, and is playing without their best player who happens to be their only true point guard.  All of that being said, it was still a huge win for a team.

Defense was the story of this game.  In my last recap, I noted that we don't change defenses very often.  That changed today, as Coach Johnson opened up in a half-court trap, and made several defensive adjustments throughout the game that seemed to keep Wichita State out of sync.

When we led 17-12 with 8 minutes to play in the first half, only to surrender the lead before halftime, I feared this game would follow the script of our other losses this year, play well early, get blown out in the second half.  Instead, the team kept battling every time things started to look bleak, and put themselves in position to win before making the plays at both ends of the court in the final minute to pull off the upset. 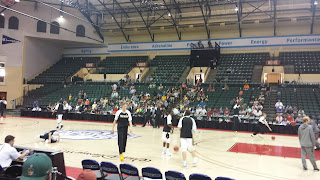 I'm very proud of this team.  They've looked awful against quality competition this year, and it wasn't always pretty today, but they stuck with it and got the job done.  The good Shannon Hale was back, he scored 20 points and actually showed some aggressiveness in attacking the basket at key moments late in the second half.  Riley Norris also had a great game, scoring 12 and making 2 of 4 from three point range.  Dazon Ingram added 11 points but had 5 turnovers to only 3 assists.  Justin Coleman struggled going 0 for 7 from downtown including some awful misses that weren't even close.

The Shockers went with a zone defense much of the second half, and it seemed to really frustrate our offense.  We only made 5 of 20 from downtown, but we seemed to make them at key moments when we needed them the most.  Their zone helped them control the tempo, and it was more of a half-court type of game than I think we would prefer to play.  In a sense, we beat them at their own game, but ironically I'm not sure we would have been able to beat them if we were able to play as fast as we would have liked.  Even though the shots weren't falling, we were aggressive in attacking the basket and able to get to the free throw line. 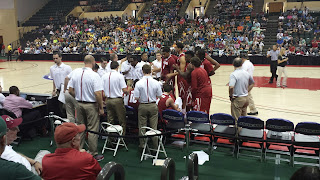 Ted Valentine and his crew were inconsistent at best, and Jeff Pon made several calls that I disagreed with, both for and against us.  Speaking of officiating, I want to go back to the Grady injury for a moment.  It is my understanding that according to the rules, the officials should only stop the clock for an injured defensive player if they need to review for an intentional foul.  They did stop the play to review it after Gregg Marshall adamantly claimed that he was elbowed, but that is a rule that needs to change, in my opinion.  I understand if a score is imminent, the officials should not blow a play dead if a team is seconds away from an uncontested layup or dunk, but otherwise no player should lie on the court more than 4 or 5 seconds without medical attention in my opinion.  As some of you know, I officiate basketball at the high school level.  Last year, I had a similar situation, a defensive player went down in a heap in the back-court in transition.  I immediately blew the play dead, and during the delay the offensive coach took issue with my decision. I told him, "by rule, you are right, but it's a player safety issue in my mind and I would have done the same for your player."  I'm no doctor, but I know with some types of injuries response time is of paramount importance, and I'm not going to risk a kid suffering a worse outcome because I followed some stupid rule about allowing play to continue because the injured player happened to be on defense at the time. This is an area that I feel strongly that the rules committees, at all levels, should take a serious look at.

All of that being said, Gregg Marshall was quoted as saying "I was scared when he fell because to me it looked like a heart issue,"  Well, Gregg, that's not exactly consistent with you pitching a fit to the officials and screaming that Dazon threw an elbow.  I've watched the replay, and it's clear that the contact was incidental, and if anything was primarily instigated by Grady.  I thought his actions unnecessarily incited the crowd and brought undue disdain to our team.  There's no doubt Marshall is a good coach, but he's a weird dude, very animated on the sidelines and frankly comes across as a prick.  I'm glad we have Coach Johnson, and I thoroughly enjoyed watching our squad hand Greggy another "L."

This was Coach Johnson's best game so far, in my opinion.  As I mentioned above, he did a great job of switching defenses when necessary.  One of the great things about going to these types of tournaments is that with the smaller venues and crowds, sitting so close to the court you can hear a lot more of the interactions between the coaches, players, and officials.  He picks his battles with the officials wisely, at one point he got us a 3 second call by bringing it to the attention of the officials, and I don't think it would have been called otherwise.

This was the second time this year that the first half score matched the second half, as we won both 32-30.  I like that a lot better than the 40-24 per half beat down we suffered at Dayton. 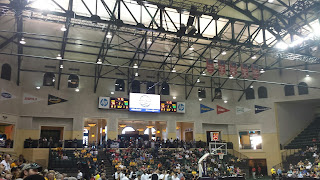 My only complaint about this venue is the scoreboard.  There's very little information available as far as stats, fouls, etc go, and the color scheme is maddening.  The time appears in green when the clock is running, but red when it's stopped. The team who's currently winning's score is green, while the losing team's score is red, but they both turn yellow when the score is tied.  Team fouls also appear in red, while everything else is yellow.  The result is a clashing mix of red/yellow/green in various places at different times.

There was another good crowd today, but we only had about 75 fans or so.  It was a road environment for the most part, but our small crowd was loud and we had a lot of fun at the end of the game.  We had several Xavier fans sitting around us, who were very gracious and supportive of our team.  The WSU fans we interacted with after the game were all also very nice.  One even apologized for the rudeness of their fans, but they've been pretty well behaved for the most part from what I've seen at this tournament.

Up next, another top 25 opponent, as we play number 17 Notre Dame for 5th place Sunday night at 7pm ET.