For the first time in nine years, we have back to back wins over ranked teams.  I posted after the WSU win that beating a ranked Shockers team was a technicality, they aren't going to be ranked for long and they are missing their best players right now.  That win over Notre Dame on the other hand is as legit as they come.  That is a very good Irish basketball team that we beat.  I'll admit, I was somewhat dreading this game, I attended by myself as my other UA friends had all departed Orlando, and I wasn't very optimistic that we could even cover the 10 point spread as underdogs.  Instead, it was the most fun I've had at an Alabama basketball game in years! 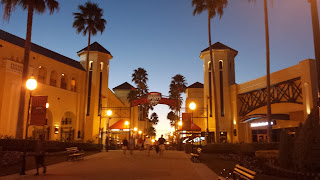 I told Bobbyjack at some point during the Xavier game that I would consider benching Art Edwards.  Clearly, I'm an idiot, and that's why Coach Avery Johnson is pulling down millions and upsetting top 25 teams while I'm writing on an obscure blog and acting like a fool in the stands.  Art set the tone early, scoring 15 points and scorching the nets from 3 point range.  He also played very well on the defensive end. 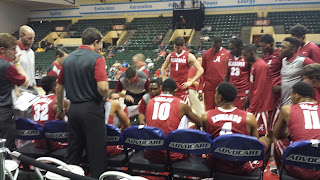 I was able to sit on the front row for this game, and thanks to the very sparse crowd, I could hear much of the interactions between the coaches, players, and officials.  I could hear every word of the huddles during timeouts when the music volume was not at a crazy level.  I can't even begin to describe how impressed I am with Coach Johnson and the organization level of our staff.  I was really surprised at how much time is spent during the timeouts going over defensive assignments.  We played man to man defense primarily, but did switch to a zone for a stretch in the second half.  Anyway, there was a lot of going through who each person was responsible for defensively, and anticipating what plays or sets ND would run, and instructing when to switch on screens, who to play tight up top and who to take away the dribble, forcing certain players to a side, when to front or play behind the post players, etc.  All of the coaches are involved and clearly each has certain assignments of things they are watching for during the game.

This team is resilient.  There was plenty of adversity to overcome.  Notre Dame answered our 13-0 run and took a lead.  They were up by 5 points at various points in the game, and a reasonable person might expect them to pull away.  We wouldn't allow it to happen.  We made shots when we had to, we crashed the boards and got rebounds to keep key possessions alive, and we locked them down on defense when it mattered most.

Sure, Notre Dame killed us with their mid-range jumpers off of the pick and pop plays.  They shot 50% from 3 point range.  They are a good team, but on this night, we were better. 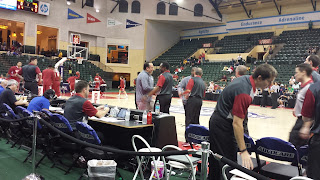 They shot 23 free throws to our 10, and once again, we only made 6 of them.  We were a respectable 6 of 17 from 3 point range, and that's going to be a key for us to be competitive in games.  Retin was a brick mason from outside, but he more than made up for it by scoring 19 points, playing great defense, and of course making the game wining shot.  He was unstoppable off the dribble, and finished on some acrobatic moves around the basket.

Jimmie Taylor only played 19 minutes due to foul trouble, and at one point went to the locker room with some sort of injury. He returned, but ended up fouling out with around 5 minutes to play.  Next man up, Mike Kessens, brought his A game. Eight points and 9 rebounds for Mike, including surprisingly good defense around the basket.  I was surprised we didn't play Donta Hall more, especially with Jimmie confined to the bench for much of the game, but Mike did a great job.

Riley Norris left the game and the court in the second half.  Coach Johnson said later that he was poked in the eye but should be okay going forward.

Shannon Hale had another great game, scoring 19 points and shooting the ball with confidence.  He made some huge 3s to keep us in the game, but more importantly he eliminated the mental mistakes and unforced turnovers, and was aggressive at the right times in attacking the basket.  If he keeps playing with this level of intensity and confidence, we will be a lot better than most predicted.

We controlled the tempo for most of the game, although the Irish were able to slow us down for a bit in the second half.  I thought we had a great game plan, and it was executed very well.  Notre Dame struggled defensively when we were able to get into transition.

Rebounding has been an issue with this team, but we actually out-rebounded the Irish, which is pretty impressive considering Jimmie's foul trouble.  That being said, we allowed them to get 4 shots at the basket in a key possession late in the game.  Thankfully they did not make their free throws down the stretch which opened the door for us to have a chance in the final possession.

Coach Johnson used a couple of timeouts to set up the game winning shot.  Notre Dame stayed in a zone defense, and we spread the floor and isolated a favorable matchup for Retin, who finished on the dribble drive. 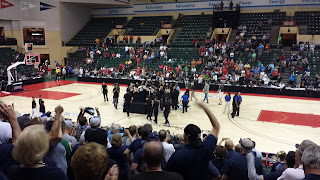 As I mentioned above, the crowd was non-existent.  We probably had 40 or so fans there, 90% of which consisted of coaches or players family.   Notre Dame had maybe 50-60, the rest were mostly leftover Dayton and Xavier fans from their championship game, with a Wichita fans also sticking around.  I hate to do this, but I'm going to call out the Orlando chapter of the alumni association.  They had a great watch party in nearby Winter Springs for the Iron bowl, that drew nearly 1,000 people.  They did absolutely nothing for the basketball team actually playing 3 games in their home town.  It wasn't even mentioned on their website.  I understand it was a holiday weekend, but that didn't seem to bother the Wichita, Xavier, Dayton, or Iowa fans.  When we played at Madison Square Garden a couple of years ago over Thanksgiving the New York alumni association did a fantastic job of getting people to come out, they bought a block of tickets and organized pre and post game meetups.  I'm proud of the football game, and I plan on being in Atlanta next weekend, but the University of Alabama is about a lot more than just football, and it would be nice if the local fans would support our other teams when they are in town.

That being said, the few who did show up were as loud and engaged throughout the game as any Bama basketball crowd I can remember. The coaches' wives led the crowd in chants of "DE-FENSE" throughout the game.  I really don't even recall hearing much at all out of the Irish fans, but of course being the underdogs I imagine most Xavier/Dayton/Wichita fans there were also rooting for us.

Speaking of the coaches' wives, I had the pleasure of sitting right across the stairs from the first Lady of Alabama basketball, Mrs. Cassandra Johnson.  She's a firecracker, but she knows the game.  I was able to speak with her briefly and I complimented the job Coach Johnson is doing despite having inherited players not suited to his system.  She said she believes these guys are capable of doing what they want, but at times they revert to "the old way of doing things."  I also thanked her for coming to Tuscaloosa, and she said, "a couple of years ago we were offered practically every division 1 job that was open, but turned it down," she joked that "with online shopping now I can live anywhere."  She said that the people of Tuscaloosa have been very nice and welcoming and that they are very happy here. 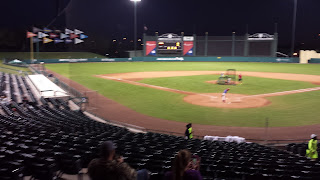 I went to Orlando hoping to win one game, but expecting three losses.  I was really just hopeful that we could be competitive, Instead, we knock off a couple of top 25 teams to go 2-1. This team still has its flaws, but I love the way they play together.  Retin is really taking on a leadership role, he's almost like having an additional assistant coach.  They stay positive and encourage each other through adversity, and perhaps most importantly, they don't get tight in late game situations.  They won't win every close game, but they are certainly showing an ability to make big plays with the game on the line, something we've been missing in recent years.

Up next, we go to Hattiesburg, MS to take on the Southern Miss Eagles Friday night at 7 pm.  The game will be televised on Fox Sports 1. USM is not a very good team, but we need to prove we can go into a true away environment and play well.