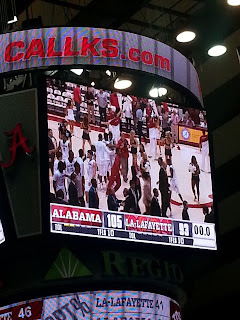 Hopefully everybody took the over in this game. We had more points at halftime, 55, than we did in the entire game against Dayton.  It was the first time since 2004 that we scored 100 points against a Division 1 opponent.  It's amazing how much better this offense looks when the shots are falling. We had 6 guys in double digits, with Shannon, Justin, and Riley all scoring 18.  Retin added 17, Art Edwards had 12 and Dazon Ingran scored 10.  Obviously, we aren't going to shoot 15 of 25 from 3 point range every game, but when we do, and take care of the basketball like we did Friday night (only 11 turnovers) we will be able to put some points on the board.

I was especially pleased with the play of both point guards.  Dazon Ingram had 10 points, 7 rebounds, 5 assists, and only 1 turnover.  For him to reach double digits in scoring despite Shawn Long protecting the rim for the Cajuns was impressive.  Justin had 18 points, 8 assists, and only one turnover, despite only shooting 2 for 9 from three point range.  He was 6 for 6 from the free throw line and generally made great decisions with the ball.  We were quite effective with both of them in the game at the same time in the second half, when Justin mainly played the 2.  I still think Justin holds the ball and dribbles a bit too much at times, but overall he had an excellent game, and was outstanding at protecting the ball late in the game.  The good Shannon Hale was back, shooting with confidence going 5 of 6 from downtown and only one turnover.  He seems much more comfortable at the 3 position than the 4. 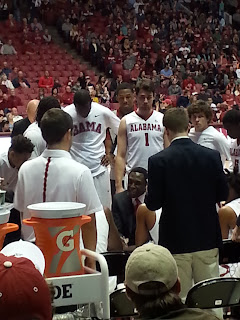 Louisiana Lafayette is a lot like us in some ways.  They want to play very fast, but aren't particularly strong at shooting the ball.  Before we get too excited about the offensive outburst, it's important to note that ULL was giving up about 85 points per game coming into this contest.  Shawn Long was as good as advertised, making some 3s and dominating the boards for 25 points and 14 rebounds.  Thankfully, his free throw shooting wasn't very good, at only 4 for 10.  For some reason they sat him on the bench for a stretch in the first half during which we stretched our lead up to 16 points.

Speaking of free throw shooting, we were much improved at the charity stripe this game.  Retin bricked a couple of technical shots in the first half, but otherwise we shot a respectable 26 of 35 for 74%.  That was important, as there were a lot of fouls in this game, by both teams. 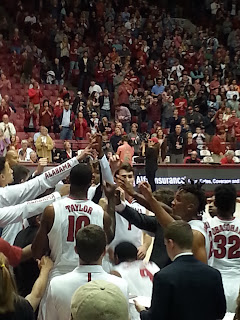 We need to improve defensively.  We were often beat down the floor and caught out of position leading to many of the fouls. In fairness, the pace of play unfairly influences a lot of people's perception regarding the quality of defense being played.  A lot of people notice point totals, but the simple math is the more possession you have in a game, the more possessions your opponent will have, and the more points you will give up.  A better measure of a defense's effectiveness is to look at defensive efficiency, or points allowed per possession.  Many people thought we played good defense last year under Coach Grant because we were involved in so many low scoring games, in fact, our defensive efficiency rating was .995, good for 171st in the nation.  So far this year, admittedly in a small sample size, our rating is 1.031 which ranks us 211th. Obviously that's not good, and we have regressed, but it's not as dramatic as it may seem.

Beyond the fact that we are often caught out of position, I would like to see us try to change defenses a little more often.  We rarely press or run zone.  We stayed in a soft man most of the game, which wasn't an unreasonable approach, but against a team like ULL that can't really shoot but has a beast of a center, I would have liked to have seen a little bit of zone to try to prevent him from getting the ball.  We did switch to a half-court trap for a bit in the second half that created a few turnovers.

I'm also a little surprised our opponents have not tried more zone or pressing defenses against us thus far.  With Coach Johnson's NBA background, he doesn't have a lot of experience in coaching against a press or trapping defense, and I'm curious to see how we will respond against those types of systems. 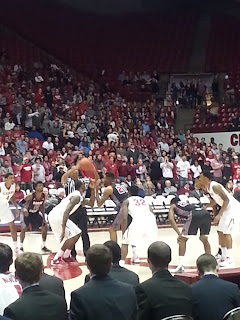 The crowd was embarrassingly pathetic.  I would guess no more than 3,500 or so there, which is inexcusable for a Friday night 7pm tipoff against a team picked to win their conference, on a weekend with a home football game.  The student turnout was respectable, sections R,S, and T were more or less full up to the portals, and it was a noticeable contrast from the season ticket holders.  With the exception of a few of the women's basketball players, we had the entire row to ourselves.  The poor attendance was really disappointing after the solid crowd we had for Kennesaw State.  It is disheartening that so many seemingly threw in the towel after one bad loss.  If Terrance Ferguson ultimately signs elsewhere, or Coach Johnson goes back to the NBA in a couple of years after having some moderate success here, nights like this will probably be a big part of the reason why.  I realize traffic was horrendous coming from Birmingham, it took me an hour and 20 minutes. Still, we should have had at least twice as many people attend this game, if not more.  Furthermore, the University roped off a huge section of the parking lot to accommodate the football RVs, of which I think I counted a grand total of 4 that were present at tip-off.  On the bright side, the lack of a crowd made it easier to get out than what I feared.  The few present were loud and into the game throughout, and mostly stayed till the end.  It was our last true home game for nearly a month.

Up next, we're going to Disney World!  Bama will travel to Orlando to participate in the Advocare Invitational at ESPN's Wide World of Sports.  Our first game is at noon EST on Thanksgiving Thursday against the Xavier Musketeers, so enjoy some Tide hoops with your turkey.  Xavier is already 3-0 with a 16 point road win over top 25 Michigan on their resume, so this will be another very tough test.  Bobbyjack and I will both be there, so be sure to check back here for a first hand report.