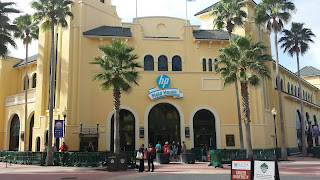 Turnovers, fouls, and air-balls, that was the story of the game for Alabama.  We got off to a great start, especially defensively.  Xavier didn't score a basket until nearly 6 minutes into the game, and we were able to attack the basket to take a 9-2 lead.  Xavier made some adjustments and started playing a softer man before switching to a zone, which completely shut down our offense.  We were 5 of 28 from 3 point range.  Eventually, Xavier started making some shots and they were able to come back and put the game away.

On the positive side, we didn't completely fold when things went south.  Shannon Hale made a 3 at the end of the first half to cut the lead to 3, and while we never really threatened after the 15 minute mark of the second half, we at least answered enough to keep the score somewhat respectable.  Early in the game we did a good job of keeping them off the boards, but Xavier finally took control of the glass as they are prone to do. 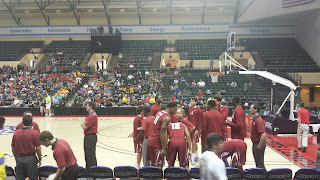 Defense was a lot better, but we still fouled way too much.  At one point in the first half they had shot something like 19 free throws to our 2.  The intentional foul call, which I thought was questionable, was one of the turning points in the game.

Give credit to Xavier for keeping their composure despite not playing their best game.  They only shot 15 for 25 from the free throw line and had 18 turnovers themselves.  Early in the second half, Dazon Ingram had a 360 dunk to cut the lead to two points, but Xavier promptly answered by making back to back 3's to stretch the lead to 8, and that was pretty much the ball game.

Given our inability to shoot, it's not surprising that we struggled against the zone.  We actually ran a 2-3 zone, and briefly showed a 2-2-1 press in the second half.  It was moderately successful, but with our inability to score the defensive strategy was largely inconsequential.  The final box score says we "only" had 18 turnovers, but it sure seemed like a lot more watching the game.  I think at one point we turned it over on 5 straight possessions.  Many of them were unforced, double-dribbles, errant passes, and travels, that seemed to be the result of guys trying to rush their decisions but being non-committal.

Despite the aforementioned dunk, Ingram did not have one of his better games.  He had 6 points, one assist, and 6 turnovers.  Coleman was a little better with 10 points and only one turnover, but he was only 2 for 7 from three point range. On the rare occasion we went to the free throw line, we shot poorly again, making only 6 of 10.  Shannon scored 10 points but again, I think he did more harm than good with his 5 turnovers and lapses on defense.  Our bigs played decent, but couldn't stay out of foul trouble.  Jimmie showed some good moves in the first half and probably should have scored more, but he was unable to finish close to the basket.  Hall blocked 3 shots in 16 minutes and was a good defender of the rim, but also picked up 3 fouls in short order.  We were over matched, and the final outcome was not too surprising. 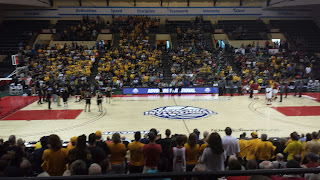 The HP Field House is located in Disney/ESPNs Wide World of Sports Complex, and is a very nice facility that seats about 5,000.  Xavier brought significantly more fans than we did, I would estimate we had maybe 100 there to Xavier's 1,500.  Wichita State brought more than both teams combined, and there were also 50 or so Dayton fans across the way.  The Xavier fans were louder and more enthusiastic as you might expect.

We had several Shocker fans sitting near us, and while my past experience with that fan base has not always been positive, the people around us were great.  We were sitting right behind the bench and they were even cheering for and encouraging our guys. At halftime, I went to the concession stand to purchase beer, assuming that Bobbyjack would tend to our general admission seats.  Instead, he also made a concession stand run, and I returned to our seats to find four yellow clad WSU fans sitting there.  I politely explained that we had merely left to go to the concession stand, and offered to hold the seats for them and make sure they got them at the conclusion of our game.  The gentleman sitting closest to me was extremely accommodating, he apologized, vacated the seats, and wished us luck,  The WSU fan sitting in front us then informed me that "you just kicked the president of Wichita State University out of his seat!"  A quick google image search confirmed, their University president was indeed sitting in the 3rd row wearing a yellow WSU t-shirt.   Anyway, I know there is a bit of bad blood between our schools due to our courtship of Gregg Marshall (and I'm still not a fan of his goofy ass), but I thought it was really cool that a) their President makes the trip and sits in the stands like a normal fan and b) he was so kind to let us have our seats back for the remainder of our game and didn't pull the "do you know who I am" card.

Despite the loss, and their lack of seat-saving abilities, it was great to see Bobbyjack and his son again.

Up next, we play those Wichita State Shockers tomorrow at noon eastern since they were just upset by USC.  It will be another road game type environment against a top 25 team.  The Shockers are missing their best player and a contributing freshman guard, but this will still be a very difficult matchup for us.