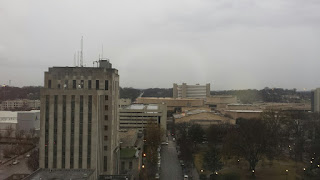 Despite an outstanding effort, the Tide came up short against a very talented Oregon Ducks squad.

Everything went our way in the first half.  The team seemed to feed off the energy from the large crowd in building a 12 point halftime lead.  Once we adjusted to their early press and started taking care of the basketball, we were getting some open looks and knocking them down.  Justin Coleman led the way making a couple of 3's and scoring 12 in the first half.  Art Edwards also added a couple, and we were 5 of 8 from 3 point range in the first half while Oregon was 1 for 7.  Unfortunately, Oregon was just too good of a team for us to realistically expect that to continue. 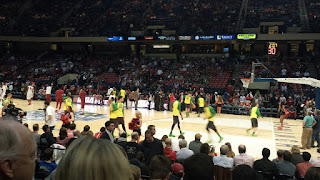 Dana Altman made some adjustments in the second half and they went on a huge run the first 8 minutes or so.  They extended their defense to deny Justin and take away our perimeter game, and their length made it difficult for us to score inside.      Our 12 point lead turned into a 6 point deficit.  The guys kept scrapping, but could never get over the hump.  It seemed like every time we had a chance to make it a one possession game we would turn the ball over.  Still, we kept the game close and even tied it a couple of times, but give Oregon a lot of credit for making huge shots to regain the lead in a hostile environment every time it looked like we had the momentum.

I think we really missed Shannon Hale defensively in this game, assuming we would have got the good version of Shannon.  Riley Norris played better than he has been, scoring 12 points, 5 rebounds, and even blocked a shot on a key possession late, but he was over matched in trying to defend Brooks.  He was slow on help side defense and got burned on the baseline cuts all night.

Retin Obasohan had a rough night.  He went 1 for 9 with 3 points and 3 turnovers.  Retin, Norris, and Coleman all had wide open 3s in the final 2 minutes that could have tied or given us the lead, but it just wasn't meant to be.  This was a tough matchup for Retin, as the Ducks length and quickness limited his ability to find space and finish at the hoop.  He really needed to have a good day shooting the ball, but he only went 0 for 4 from three point range.

As quick as the ducks are, Justin Coleman made them look slow at times.  Justin is shooting with a lot of confidence right now and he was showing off his quick release last night.  He ended up with 24 points, 6 assists, and 3 turnovers.  He did get rejected several times trying to drive to the basket and made some ill-advised passes that led to turnovers and easy points for Oregon.  At times it looked like he might be trying to do a little too much in front of his hometown crowd, but I don't think we would have been in position to win the game without his aggressiveness.  There will be learning pains, but I'm glad to see him being aggressive and playing with confidence. 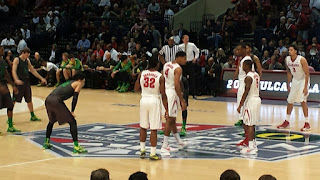 In the end, Oregon was just too long, too athletic, and too quick for us.  Give them credit for making the plays with the game on the line and making the free throws to seal it in the end.  Coach Johnson said in the post game that Oregon could be a sweet 16 type of team, and I don't disagree with that.  I think they are certainly a legitimate top 30 team, and we took them to the wire without Dazon or Shannon, and also without the services of Art Edwards who missed a significant portion of the second half after twisting an ankle.

I love Birmingham, it's my hometown and things have improved dramatically in this city over the last 5 years or so, but there are still a lot of things that need improvement if we want to continue to successfully host events like this.  We arrived in Uptown, the relatively new entertainment district adjacent to the BJCC a little before 6, but every establishment had nearly a two hour wait for food.  We went to one of my favorite places downtown, Rogue tavern a few blocks away, and they were packed and severely understaffed.  There's definitely a market for more pre and post event spots near the BJCC in uptown/downtown.  The arena itself is nice enough, but I noticed the majority of the concession stands were closed.  It wasn't an issue for us, as we ate before the game, but I understand some people were waiting in 30 minute plus lines.  Also, the start of the second half was delayed because there was debris on the floor from the halftime show, and it took about 10 minutes or so for the event staff to get that sorted out.  At the time, I thought perhaps the roof was leaking, but thankfully that wasn't the case.  There was another delay later in the game when it seemingly took an inordinate amount of time for someone to bring out a ladder and fix the padding on the backboard.

Despite all of that, it was the best atmosphere we've had at a basketball game in years.  I would estimate close to 13,000 were there, all but a couple of dozen cheering for Bama.  It was loud, and the fans were knowledgeable about when to cheer and everybody was on their feet at key moments in the game.  The players seemed to appreciate the energy and feed off of it.  I happened to be sitting next to Terrance Meade, and he seems like a super nice guy.  He seems excited about the direction of the team and mentioned that Coach Johnson has been great about welcoming back former players.

Up next, we play another school in the state of Alabama who also has a football team still trying to win a national championship.  The Jacksonville State Gamecocks will make the trip to Tuscaloosa for a 7pm tipoff, Tuesday, December 29th.  Until then, Merry Christmas and Happy Holidays to all.