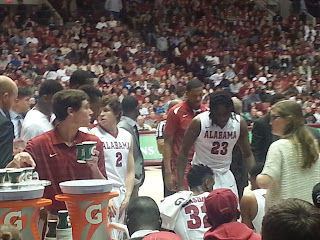 Kentucky won rather easily despite not playing anywhere near their capability.  They are just too long and fast, and they completely shut down our offense.  Frankly, their second string is more talented than our starters, and we probably don't have more than one or two players who would even make their team.  They took away our first pass to the wing, and from there our offense came to a grinding halt.  Coach Johnson could not be pleased with the pace of this game.

Retin and Art did their part to keep us in the game.  I thought Retin played well on both ends of the court, and he made enough plays by himself to keep the score respectable for most of the game. Unfortunately, we had no inside presence whatsoever. 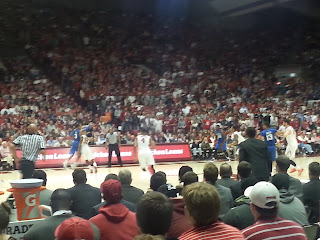 Donta Hall made a few good plays while he was in the game, but Jimmie didn't bring anything to the table.  Once again, we were dominated on the glass, and you can't beat a team like Kentucky by getting out-rebounded 43-25.  Our inability to get rebounds off of missed free throws is starting to become a major concern.  At one point in the second half we had cut the lead to 6 and seemed to have a bit of momentum, then gave up a 4 point trip when we didn't box out after the and one free throw.  That stretched the lead to 10 and we never threatened again.

I was a bit surprised we did not play more zone defense, but we managed respectfully well in the man to man, and given our rebounding woes perhaps Coach Johnson didn't want to put us at even more of a disadvantage on the glass than we already were.

We got nothing from 3/4 position again.  Riley Norris managed to score 10 points, but he was a huge liability on defense.  Shannon was 1 for 9, including 0 for 6 from three point range. With the exception of the aforementioned play from Retin and to a lesser degree Donta and Art, the one highlight was Lawson Schaffer making a 3 from the corner in garbage time. 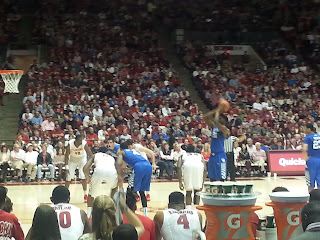 The most talented team in the league wasn't likely to start 0-2 after getting drubbed by LSU, so this game should not have been a major surprise to anybody.  I thought our guys played hard, if not always smart, but they were just over matched.

It was a packed house, and credit to the students for coming back early and filling up the student section.  Classes do not begin until Wednesday, so I was pleasantly surprised to see a full student section.  Of the 15,000, Big Blue Nation probably had about 1,500-2,000, mostly up above the portals and in the corners, with a few sprinkled throughout the lower part of the arena.  Despite the full house, I thought the atmosphere was lacking.  Kentucky got an early lead and it seemed to take our crowd out of the game.

Up next, it doesn't get any easier.  Undefeated South Carolina comes to town for an 8pm tipoff Wednesday, and with their imposing post play, they present a nightmare of a matchup for us.  The game will be televised on the SEC Network.