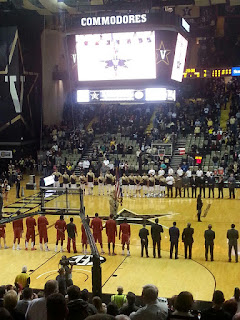 We won in this gym 3 years ago, so we aren't due for another victory up there until approximately 2043.  I don't think anybody was surprised by this.

Riley Norris put us up 3-0 early, and I was hoping he would continue his hot shooting from the Carolina game.  Instead, he only took one more 3 for the rest of the game. To Vandy's credit, they did a good job on him defensively.  We were not getting the open looks we got against Carolina.  Still, I thought Riley passed up 3 or 4 shots.

We started the game in a zone, and predictably Vandy made us pay by promptly making their first 3 point attempts from downtown.  With a pair of talented 7 footers in the post, it was a case of pick your poison for the Bama defense.  Overall we played fairly well in the first half.  We fought back to take the lead by limiting the Dores to one shot and attacking the basket on offense.  We only trailed by 2 going into halftime.

The second half was pretty much a disaster.  We couldn't stop them without fouling and we couldn't score.  Vandy gradually stretched their lead out to 16 before we finally made some 3's in garbage time to make the score respectable and get the backdoor cover. 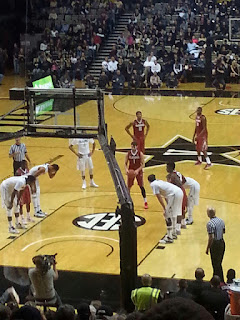 I've seen 7th grade teams that shoot free throws better than us.  We were 7 of 20.  Vanderbilt made 9 of 16 three pointers.  When your opponent makes more 3s on fewer attempts  than you convert from the charity stripe, that's a problem.  It didn't cost us this game, but we would have been more competitive.  I don't know what the answer is, but this is embarrassing and unacceptable.  I would have to go double-check, but I don't believe we made 2 in a row all night.

There were some positives from this game.  I thought our post players performed better than they have in recent past.  Jimmie had a good first half and ended up with 8 points and 9 rebounds. Retin scored 10 and I thought he got hammered on the drive a few times and should have gone to the line more.  Of course, as discussed above, it's debatable if that would have netted us any more points.  Donta Hall played well in his 8 minutes but he's going to have to learn not to foul if he wants to get more playing time.  We got the decent version of Shannon Hale.  His shot was off, but I thought he played solid defense and was aggressive on offense, scoring 13 points before fouling out.

Vandy is one of the most talented teams in the SEC, but they have under-achieved to this point.  I thought they cleaned up a lot of the problems they've had.  We needed to force turnovers to have a chance in this one, but they took good care of the basketball only coughing it up 7 times. 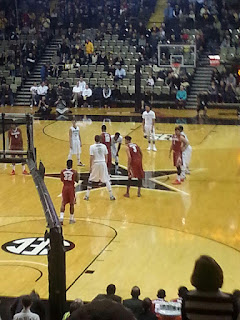 Memorial Gym holds about 15,000, but due to its goofy configuration where you can't see large sections of the arena no matter where you sit, it's impossible to give a good crowd estimate.  It wasn't packed, but there was a solid crowd.  I'm going to guess about 10,000.  It was one of the better crowds I can remember for an away game, with probably close to 1,500 Alabama fans there.  There was a significant amount of crimson in each section that was visible from my seat, with the exception of the Vandy student section.  Speaking of which, their students were very late arriving and still did not fill their section.  Both sets of fans were loud and into the game, although we didn't have much to cheer about after halftime. The Vandy fans that I interacted with were pleasant for the most part.  Several people congratulated us on the football national championship.    The constant complaining about the officiating from the Vandy fans was tiresome, particularly from the guy sitting behind me who didn't have the slightest grasp of the rules.  He also constantly accused our guys of "playing dirty," and had no idea who Coach Avery Johnson is.  I was somewhat surprised that a few of their fans expressed displeasure towards Coach Kevin Stallings, he may be starting to feel a little bit of heat up there.

On the bright side, many other games went our way Saturday.  Clemson upset Miami, and Notre Dame walked into Cameron Indoor Stadium and upset Duke.  According to RealTimeRPI, we are still in pretty good shape at number 42.

Up next, we go to the ugliest village on the plains in Lee County Tuesday night for an 8 p.m. tipoff against the auburn tigers.  The tigers are coming off a big upset of Kentucky, and it will be another hostile environment.  The game will be televised on SEC Network.