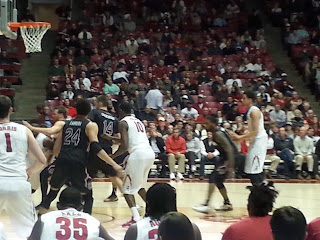 I owe Riley Norris an apology.  I've been critical of his play the last two games, but to say he proved me wrong in this one would be an epic understatement.  He got the start over Justin Coleman as Coach Johnson wanted a bigger lineup to match up with Carolina's size.  He scored 15 points in the first 5 minutes of the game, setting the tone early and helping the Tide build a lead that would only grow throughout the game.  He finished with 27 points going 8 of 11 from 3 point range, and was also our leading rebounder with 7. 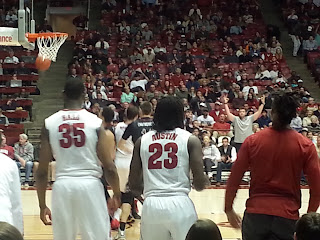 I feared this was a bad match up for us.  South Carolina was the league's leading rebounding team coming into the game, we were the worst.  They are very strong in the post, obviously that's one of our biggest weaknesses.  I said before the game, "we'll have to shoot 40-50% from 3 point range to have a chance."  We went 13 for 28, which was obviously good enough for more than just a chance, thanks to awesome defense.

While Riley Norris was the story of the night, it was the team's effort on defense that ultimately won this game.  We forced turnovers in 7 of USC's first 11 possessions.  That, coupled with Riley's hot shooting, put Carolina behind the 8 ball early.  We took away their strength in denying the entry passes to their guards, and they were forced to take bad jump shots playing from behind all night.  They finished the game with 18 turnovers and shot only 3 of 18 from three point range.  It was by far the best we have played in the zone all year, but Coach Johnson also did a great job of switching defenses at the right times to keep Frank Martin's squad out of sync.  We also ran a lot of soft man, but everyone did a good job of closing out on their shooters.  The press was also effective following the rare made free throws. 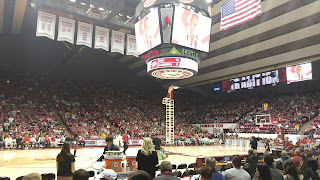 Interesting halftime show, this guy stacked chairs and climbed on top of them.  I would hate to play against him in Jenga.

With a 13 point halftime lead; I did not think it was very likely the hot shooting and great defense would continue.  I said we needed to stretch the lead to 18 or so before Carolina made their run.  Instead, we stretched it to 27 and the Gamecocks never seriously threatened.

Justin Coleman also deserves a ton of credit for this win.  He did a fantastic job of coming off the bench to run the point, and many of Riley's 3's were the direct result of Justin's drives getting him open.  He ended up with 14 points, 6 assists, and 5 rebounds in 24 minutes.

These types of games are what makes basketball so awesome.  Who would have thought a player averaging 6 points per game would go off for 27 against a great defense?  Who would ever think the worst rebounding team would win the battle on the boards against the best rebounding team, 38-33?

We now have three wins over top 25 opponents.  With the big win over the Cocks along with Clemson's inexplicable upset of Duke, our RPI improved 20 spots in one day, now up to 43.  The only negatives from this game were our continued poor free throw shooting, just 12 of 21, and 17 turnovers. 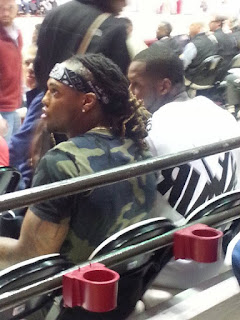 There was a solid crowd of about 9,500 on hand.  I would have hoped for more against a top 20 undefeated team, but coming off the Kentucky loss and it being a couple of days after the football championship, plus it being a late 8 pm tip-off on Wednesday which is "church night" for a lot of people in Tuscaloosa, it wasn't a bad turnout.  The students were awesome, the entire student section was packed out 30 minutes before tip-off.  The atmosphere was great.  The crowd was loud and into the game throughout.  The students were given promotional foam "3 fingers," which proved to be rather appropriate.  The place erupted when Lawson Schaffer came into the game and made a long 3 off the dribble in the final minutes.  Derrick Henry, Reggie Ragland, and Kenyan Drake made an appearance.  They sat right in front of us for a portion of the first half before being introduced during a timeout.  They each shook hands with Coach Johnson and several of the players before leaving the court.  Several people came down to get autographs from Derrick, and he was extremely courteous and accommodating.  It was great to see the entire team run over to the student section at the end of the game.

Up next, we travel to the house of horrors known as Memorial Gym in Nashville to take on the Vanderbilt Commodores.  Coach Johnson said in his post-game interview, "We would love to have our fans support us in Nashville and travel all over the country with us like we do in football." The 5pm Saturday afternoon tip is perfect for those of us in Birmingham and points north (I'm looking at you, Huntsville folks), to make a day trip.  What better way to show our appreciation for these guys after this huge upset win by supporting them on the road?  There are still plenty of tickets available here.  I will be in Section 2F.  For those who can't make it, the game is on SEC Network.