Alabama looked awful for much of the night, but managed to come back three times to get the win.

I was concerned that we would come out flat.  No team is up for every game, and it's only human nature to be a little down after losing several hyped games.  When you think about our recent schedule, we started with the first game in Ole Miss's new arena, Kentucky is always a huge event, South Carolina was undefeated and ranked coming in, auburn is a big rivalry game, and LSU has arguably the best player in the country.  After all of that, the team did not look motivated against a middle-of the pack Tennessee team in a half full arena on a rainy Tuesday night.

The first ten minutes or so were as bad of basketball as I've ever seen.  The offense was lethargic against the Vols' zone.  The jump-shots were not even close, and we had a number of unforced turnovers.  Over ten minutes into the game, Tennessee had a 16-4 lead.  If not for Tennessee also playing poorly and turning the ball over frequently, the game could have easily been out of reach in the first half.   Instead Shannon Hale started playing more aggressively, we capitalized on some turnovers, Riley started controlling the glass, and we cut the lead down to 1 going into halftime. 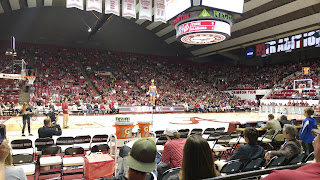 I'm going to take a brief break from the game analysis here and talk about the halftime show.  I could literally watch the Red Panda do the same routine every halftime show and it would never get old or boring.  She rides around on this 7 foot unicycle, and balances stacks of bowls on her foot, which she then proceeds to flip and catch on the top of her head.  The fact that anybody even thought of doing this as a form of entertainment is amazing to me, but to actually be able to practice and accomplish this on a regular basis is nothing short of astounding.  The science, skill, strength, and everything that goes into this is just incredible.  Here is a short video from the official athletic website:

Also, here is a great article about how she's overcome a lot of adversity to return after a couple of years in retirement:  Red Panda Returns

Back to the game, the first few minutes of the second half were even worse than the first.  We modified our zone defense to trap Punter as soon as he crossed half-court.  It was a similar game-plan that we used against Stefan Moody at Ole Miss, and it was effective the first couple of possessions.  However, Punter adjusted to quickly get rid of the ball, and our interior defense was slow to rotate, giving UT several easy baskets in a row.  Our offensive struggles continued, but even more worrisome was our lack of effort on defense.  We did not even bother to close out on their perimeter shooting, giving up some wide open 3's, which allowed the Vols to stretch their lead to 15 points.

It looked like the game, and possibly the season would go down the crapper for good at that point, but somehow the Tide found the energy to bounce back.  Shannon Hale and Retin led the charge again, defensive rebounding improved, we increased the tempo to negate their zone and went on a big run to cut the lead back down to 1 point.

With around 7 minutes to play, it appeared a key play went against us.  Down 1, we had a solid defensive possession, and Tennessee missed a shot at the end of the shot clock, but got the rebound.  The whistle blew, and much of the crowd wanted a shot-clock violation.  The play was at the other end, and I'm still not 100% sure what happened, but it appeared to me that UT got the shot off and it hit the rim.  Tennessee maintained possession after an explanation to Coach Johnson left him incredulous.  They did not announce the call, but I believe it was an inadvertent whistle.   I think that was the "right" call, but UT was out of sorts and the brief discussion allowed them to set up, and they ended up getting and "and one" three point play.  It seemed to kill our momentum and Tennessee stretched the lead back to 8 points with just 4 minutes to play.

I feared we had used all of our energy in the first come back, but once again, Retin took over, Shannon knocked down some free throws, Riley limited the Vols to one (usually contested) shot at the other end, then Art Edwards hit the dagger in a tie game to give us a 3 point lead for good with 30 seconds remaining.  Retin finished them off with the And one on a break off the rebound in the final possession that mattered.

There were a lot of issues in this game.  We looked unmotivated on defense for much of the night.  The offense was stagnant against the zone.  Justin Coleman continues to struggle, and we really need him to step up at point guard with Dazon out for the year.  We can't ride Retin all season.  I understand we went with a smaller lineup to match up with them most of the night, but even when in the game, Jimmie Taylor gave us nothing on a night he should have been dominant.  The same goes for Kessens.  Those to combined for 3 points in 33 minutes.  Donta Hall played 14 minutes and was a force defensively while scoring 6 points.  He continues to struggle with foul trouble, and that will limit his playing time.  I was surprised we stuck with the zone for almost the entire game, but it worked, since with the exception of their big second half run, UT could not consistently make open shots.

Retin ended up with 22 points and Hale had 20.  It was good to see Shannon being aggressive and more importantly making his free throws.  He was 9 of 10 from the line, and we actually shot 11 of 13 from the stripe.  The team did not get discouraged when shots weren't falling.  We were only 4 of 21 from 3 point range, but Art made the big one when needed.  Riley Norris only scored 6 points, his shot was off, but I thought he played an outstanding game, and we don't win without him.  He was the only one who consistently brought good effort on defense, and his 13 rebounds were critical for a team that has struggled on the glass.

The late tip-off, recent losses, and the nasty weather contributed to a crowd that was disappointing in numbers but not in spirit.  It was an absolutely miserable drive down from Birmingham, and I would estimate the crowd to be around 7,500.  There were maybe 50-100 UT fans scattered throughout which was a little more than I expected.  The student turnout was solid, but not packed.  We were taken out of the game early, but every time the team showed any signs of life the crowd really got behind them.  The players seemed to feed off that energy, and I'm not sure we complete that third comeback run if this game were played on the road.  It  seemed to have Tennessee rattled a bit offensively as well.

Up next, we travel to Columbia, South Carolina to take on the Gamecocks at 5 pm CST Saturday evening.  It will be a very difficult task as Frank Martin's team will be out for revenge since we handed them their first loss of the season.  The game will be televised on SEC Network.