Coleman Coliseum, where ranked teams come to die!  Bama got its 4th win over a top 25 team this season with the thrilling one point upset over the Aggies.  In the five seasons previous to this one, we were 1-22 against ranked opponents.

It was a great team effort, but the post players really stepped up and won this game for us.  Rebounding has been a problem all year, but we won the battle of the boards.  Bama had 14 offensive rebounds, and we limited the Aggies to just 8.  Most of those came during a stretch in the second half when Jimmie had to play a bit tentative due to foul trouble. 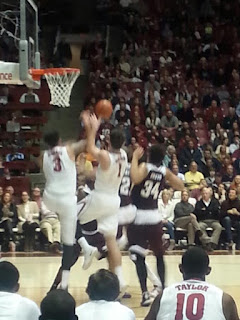 The game plan of forcing the Aggies to take jump shots appeared to back fire early.  Texas A&M made their first 3 from beyond the arc to build an early 17-12 lead.  The Tide did a nice job of contesting their shots, and as I noted earlier, limiting them to one shot per possession.  Riley knocked down some incredible 3s in the first half, and we were able to come back and take a 5 point lead into the locker room at halftime.

As the game went on, you could tell the Tide's confidence continued to grow.  The bigs all did a fantastic job on the defensive end.  Texas A&M had 13 turnovers, and I bet at least 8 of those were in the paint.  We were disrupting their passing lanes, stripping the ball, and effecting their shots.  Things looked bleak when Jimmie picked up his 4th foul early in the second half, but Donta Hall came in off the bench and promptly began dominating the game!  He ended up with 10 rebounds and 6 points in 21 minutes of play, but he did so much more that doesn't show in the stat sheet. 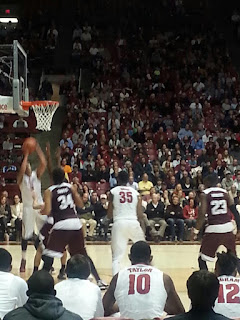 Through tenacious defense and a balanced attack with lots of ball movement on offense, we were able to build an 11 point lead with about 6 minutes to play.  Texas A&M made a great come back with their backs to the wall.  Jones, House, and Collins all started to find their groove as they were able to attack the basket and get to the free throw line.  We looked a little tired in those final minutes, and I think we may have took the air out of the ball just a little too soon.  We started shortening the game after the 4 minute timeout.  The fouls and second chance opportunities we gave up really hurt us in the final minutes.  We also made some bad decisions in transition and blew a couple of scoring opportunities that could have made the final seconds a lot less stressful.  I read somewhere that the statistical probability of Jimmie Taylor going 2 for 2 from the line, while Collins, a 93% shooter, misses both with the game on the line, was something like one in a thousand.  I'm not sure if I've ever heard Coleman Coliseum louder than it was during those final two free throws.  It was almost as if the crowd willed the ball away from the hoop. 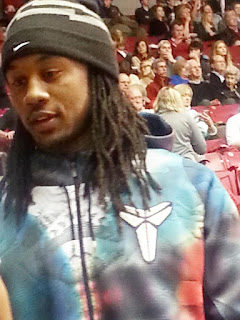 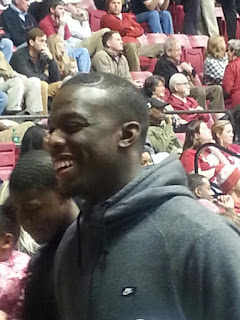 It was great to see both Levi and Coop back at the game!  They were both going crazy and celebrating with Retin at the end.  Levi spent a lot of time talking to fans, signing autographs and taking pictures.

The crowd was really disappointing.  For a top 25 game that could give us serious NCAA tournament consideration, I was hoping for much more than the 9,000 or so that showed up.  The student section was mostly full, but even that wasn't completely packed.  The atmosphere was lacking for much of the game, but the crowd did really get into it when we had our runs in the second half.  I thoroughly enjoyed singing Rammer Jammer to $tansbury after the game.

Up next, we travel to Gainesville, FL to take on the Gators.  Florida currently has a top 25 RPI ranking, so a road upset would put us in a great position for an at-large bid.  I'm going to make a separate post discussing our NCAA tournament possibilities.  Tip off is set for 5:30 pm EST.  There are still tickets available, hopefully some of our South Alabama fans and Florida alumni contingent will be there to lend the guys some support.  I will be making the trip and will be sure to post a first hand recap, probably at some point Sunday.  If you can't make it to Gainesville, the game will be televised on SEC Network.