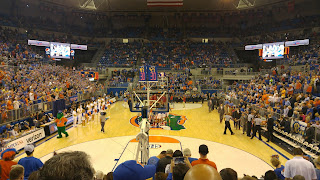 For the first time in 21 years, Alabama goes to Gainesville and gets a win!  It wasn't exactly a work of art, but the team grinded it out and found a way to get the job done.

You could tell we were ready to play when we jumped out to an early 8-2 lead that took their crowd out of the game.  Unfortunately, the offense went stagnant and the Gators were able to come back and take a 27-23 lead into the half.  Justin had a great buzzer beater to end the first half.

We played a 2-3 zone much of the game that was very effective.  Florida was only 3 of 21 from 3 point range.  Unfortunately, we could not rebound out of it.  They had 23 offensive rebounds to our 6.

Despite being dominated on the glass and having our entire starting back court foul out with nearly 5 minutes remaining, we managed to hang on for the win.  Jimmie Taylor really stepped up on both ends of the court and was the MVP in my opinion.  He ended up with 11 points, 4 rebounds, and 5 blocked shots.  He had a couple of dunks late in the game that seemed to really energize the rest of our team while demoralizing the Gators.

It was another great team effort, with 4 players scoring in double-digits.  In addition to Jimmie, Retin had 15 and Justin and Hale each added 10.  Justin's game was huge, and he did a great job of leading the team and protecting the ball after Retin fouled out.

The O-Dome may be the worst facility in the SEC.  It's basically all temporary bleachers.  My seats were plastic benches with no backs, and I didn't have an unbostructed view of any of the scoreboards, so I had to look to one board to see Florida's foul information, and another to see ours.  Thankfully, they are planning to renovate.  They had a good crowd, that place holds about 11,500 and it was more or less full. There were only about 40 Bama fans scattered throughout.  For the most part, the Gator fans were great, although the lady next to me politely asked me to "watch my language" after I yelled at Riley to "shoot the damn ball!"  which was ridiculous given the F bombs the Gator fans behind us were dropping.  I also got a little irritated at a guy who said, "your NBA coach is a dumb-ass, guess he forgot you don't get 6 fouls," when Retin fouled out.  Retin's 4th foul was BS, but regardless, I did not disagree with the decision to leave him in the game at that point.  I also had several fans congratulate me after the game.  I was really surprised by the mass exodus when we went up by 8 with still over a minute to play.  Between stupid fouls and missing free throws, we nearly let them back into it. 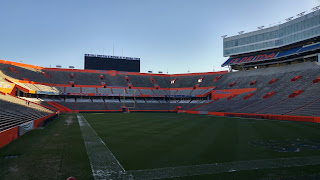 One of my favorite things about Florida is that they leave their football stadium open.  The location is great, the basketball arena is right next to the football stadium, and both are a short walk from Midtown, which is basically their version of the Strip.

With the win, our RPI is now up to 37, and Jerry Palm projects us as a 10 seed in his latest bracket!  If we just win our 3 remaining home games, I think we will make it.

Up next, we stay on the road with a trip to Baton Rouge to take on the LSU Tigers Wednesday night. Tip off is set for 8 pm on the SEC Network.