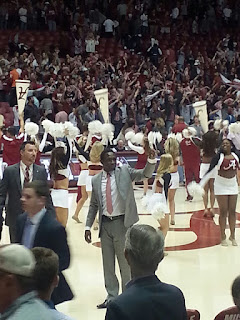 It wasn't pretty, but Bama managed to survive and advance against rival auburn. We got off to a great start defensively, as the Tigers did not make a basket from the field for the first five minutes of the game.  We built a 10 point first half lead, but then went cold and struggled to hold onto the ball, allowing auburn to cut the lead to 2 at halftime.

The tigers made their first 5 or 6 shots of the second half, and suddenly we were looking at a 10 point deficit with 15 minutes to play.  Coach Johnson called a timeout and switched to a zone defense, which was much more effective.  Despite some poor shooting, we were able to chip away at the lead before regaining it for good in the final five minutes. 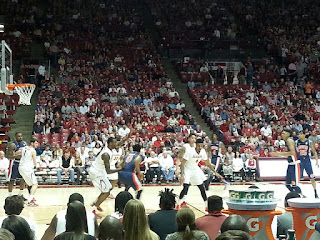 Several guys stepped up at key moments to keep our NCAA tournament chances alive.  Donta Hall was a beast on both ends of the floor.  He had 10 points and 8 rebounds, and I think all of his points may have came from dunks. Unfortunately, he fouled out after just 16 minutes of playing time.  Kessens had struggled for much of the game, but came up with 2 huge dunks after Donta fouled out that sparked the come back. It was great to see Art get his shot back, scoring 15 points.  Retin scored 16 despite being limited to 29 minutes due to foul trouble.  auburn defended him similar to the way Mississippi State did, which opened up some opportunities for Hall and Kessens.  Riley Norris had 8 rebounds, and we did a much better job on the boards than we did in the first meeting between these two teams.

I question why we did not try to press them at any point in the game.  They don't have anybody who can handle the ball, and had Bowers running point guard at times.  That being said, they did just beat Arkansas on the road, and I would assume Arkansas pressed them most of the game. 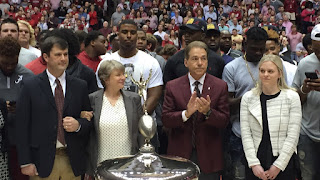 It was a packed house thanks to the Iron Bowl trophy presentation.  I am happy to report that everybody stayed for the second half, and the crowd was very much into the game at key moments, despite being temporarily silenced by auburn's early second half run.

Up next, the Arkansas Razorbacks come in for an 8 pm tipoff Wednesday night in another must-win game for the Tide.  I'm really worried about this match up, Justin Coleman is going to have to be stronger with the basketball against the Hogs pressure defense.  It's senior night and a huge game, so try to be there to show your support for Retin and the rest of this team. The game will be televised on SEC Network.
Posted by DJC at 2:47 PM