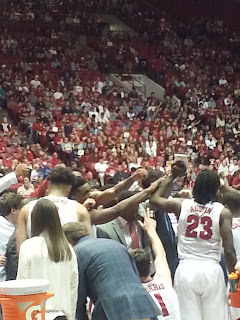 Bama built a big lead behind balanced scoring and great defense to cruise to an easy victory over the SEC's worst team.  The is the only team we will play in conference that we will have a clear advantage over in talent.  Nevertheless, coming off the big overtime win on the road and with a top 25 ranked opponent looming next week, this easily could have been a trap game.  Instead, the team was focused and took care of business. 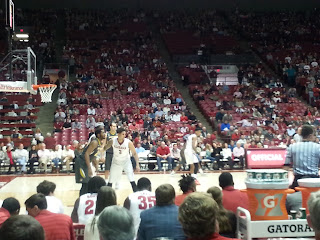 It was nice to see Mike Kessens get the start and play well after being injured in Starkville.  Shannon Hale did not play but my understanding is that he was cleared and was available if necessary.  Justin Coleman is still battling through turf toe but seems to be adjusting to it at least, and everybody should be good to go Wednesday night.

We actually took advantage of our size advantage in the post for a change.  Mike had a nice game with 8 points and 5 rebounds.  Jimmie also played well with 11 points and 5 rebounds.  Donta didn't score, but I thought he had an excellent game with 6 rebounds, played great defense with 4 blocks, and perhaps most encouraging, managed to play for 20 minutes and only pick up one foul. 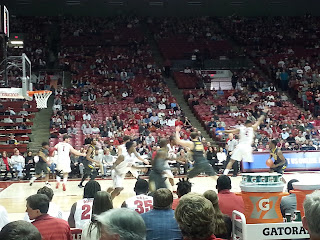 Retin is continuing his push for All Conference honors with another 16 points and 7 rebounds performance.  Riley had another great game with 18 points and played well on both ends of the floor.  His game has improved tremendously over the course of the season, and he should be commended for really stepping up in Hale's absence.  Justin Coleman continued his hot streak despite the nagging injury, scoring 14 points.  Art Edwards was also in double figures with 11. 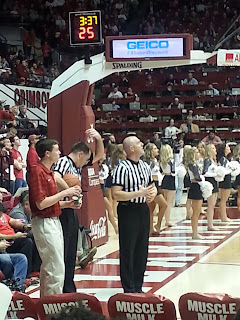 This game was not as close as the final score indicated.  We led by 12 at halftime and stretched the lead to 24 in the second half, and maintained a 15+ point lead throughout most of the game.  With both of our walk ons in the game in the final minutes, Mizzou was able to make it respectable.  We took the air out of the ball with about 3:30 remaining.  Speaking of the walk-ons, Lawson Schaffer gave us a few minutes in both halves of the game again.

The baseball stadium was hosting an alumni game in the newly renovated Sewell-Thomas stadium before the game.  We walked through briefly, and my impressions are that they did a good job with the Joe.  The canopy on the top was extended so that nearly all the infield seats are now covered.  Lots of suites and press box area expansion.  The bleachers down the left field line appear to have been reduced to just a few rows of actual seats now, but the outfield pavilion in right field appears to be expanded and is now connected to the main part of the stadium.  The concourse was expanded, and the crimson seats replaced with a more aesthetically pleasing green.

As for the basketball game, the crowd was really disappointing.  It was announced as a "sell out," but even after the athletic department announced it as a sell out on Friday, I went to rolltide.com out of curiosity and was able to find quite a few seats were still available.  I would estimate about 12,000 or so, which is a decent crowd, but well sort of a "sell out."  The empty seats among the season ticket holders is well documented, but I am curious as to who is buying the crappy upper corner tickets and not showing up?

Up next, the Texas A&M Aggies come to Tuscaloosa for an early 6pm tipoff Wednesday night.  The Aggies are currently ranked number 8, but sure to fall due to their 2 game losing streak with losses at Vandy and at home to South Carolina.  Still, they will be ranked and are arguably the best team in the conference.  They've lost 2 in a row, and we've won 2 in a row.  If that trends continues, we will suddenly be in decent shape to give ourselves a reason to watch selection sunday!  I know the tip-off crowd is inconvenient, but we really need a legit "sell out" crowd for this one.  Do what you have to do to get there.  Skip church, leave work early, whatever it takes, this game is important.  The game will be televised on SEC Network.