Tuesday we lost the commitment from our best recruit in years, and last night we saw our NCAA tournament bid hopes go up in smoke on senior night.  It's been a horrid week for Alabama basketball.

Overall, I thought we had a pretty good game plan.  We handled the press well, and only had 10 turnovers.  While Retin had an unbelievable game and nearly won it by himself, he had an uncharacteristic 6 turnovers.  Most of these were from bad passes in the half court early in the game.  It seemed to take him a little while to settle down and get going.  At times, I think we hurt ourselves on offense by passing up decent shots because we worried a little too much about controlling the tempo. 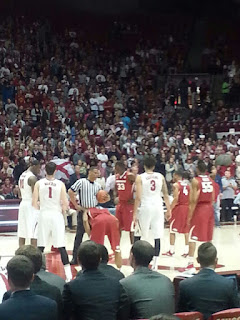 We had a 4 point lead with a little under 10 minutes to go in the first half, but then went into an offensive funk including a 6+ minute scoring drought from the field.  This allowed Arkansas to take a 34-27 lead into halftime.

I thought we made some good defensive adjustments at halftime.  They've been a good 3 point shooting team, and we held them to just 3 of 11.  Unfortunately, we couldn't stop Moses Kingsley.  While he hurt us some in the low post, that was set up by his mid-range jump-shot. 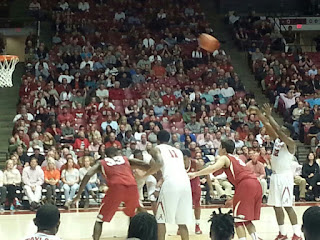 Free throw shooting continues to be a problem.  We were 15 of 23, making 4 more than Arkansas despite shooting 8 more.  Speaking of missed free throws, we've got to do something about the scoreboard/clock operation.  They had to stop the game twice to correct the score, but more importantly, Shannon Hale noticed the clock continued to run after being handed the ball to shoot a free throw.  This resulted in him having to give the ball back to the official, and stand on the line while they went to the table and sorted it out.  Predictably, he missed it.  That simply cannot happen on our home court at this level.

Retin did all he could, carrying the team and scoring 32 of our 61 points.  The problem, as has been the case over the past couple of weeks, is he got little to no help from his supporting cast.  While Arkansas is prone to giving up good looks from the perimeter, it seemed nobody else was willing to shoot the ball.  Riley seems to have reverted back into the timid player that struggled early in the season.  We really needed a big game from Justin Coleman, but he was 0 for 2 from 3 point range in 29 minutes, including missing the potential game winner when he was wide open from the top of the key.  I think he was a little surprised the ball bounced his way, and he forced the shot a little too quickly.  Hale had a decent game and was our only other player in double-digits, but I thought he lacked aggressiveness at times.  Donta Hall is our best post player right now, and the fact he was able to play 21 minutes without fouling out is encouraging.  He had 5 points, 7 rebounds, and 5 blocks.  The problem is he can't finish around the basket unless it's a dunk.  If he can develop any kind of shot, he could be all conference.  We have little to no scoring options in the post right now between Hall, Taylor, and Kessens. 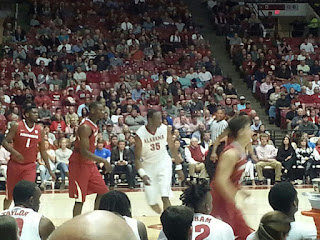 We had 3 possessions late in the game where Coach had an opportunity to draw up a potential tying or take-the-lead play in a timeout, and we failed to get a good look in any of them.  It seemed like we had a good plan to get the ball in-bounds, but then the plan was just to get the ball to Retin and hope for the best.

More important than the basketball game, please keep Art's family in your thoughts and prayers.  His family was not able to make it for senior day because his mother was undergoing stomach surgery.  Hopefully she has a successful outcome and a speedy recovery.  It was great to see Cassandra Johnson and the team stand in with him as his family.    Mrs. Johnson introduced me to Art's father in Orlando after the Notre Dame game, and he couldn't have been nicer.  She truly does consider him to be family.

With the loss, our RPI is down to 69.  Jerry Palm still has us 3rd in his "first four out."  That being said, with 3 bad losses and the plummeting RPI, I just do not see a realistic path to an at-large bid.  It would likely take beating Georgia plus some combination of 2 out of Texas A&M/South Carolina/Kentucky in Nashville.  I'm going to discontinue the daily "Bubble watch" feature here, unless others feel strongly about wanting me to keep it up.  It just feels like an exercise in futility at this point.

Up next, we travel to Athens, GA for UGA's senior night, Saturday at 4:00 pm EST.  The game will have some significance for seeding in the SEC tournament.  There are a bunch of teams with 8 or 9 wins, and without taking the time to really break down all the tie-breakers, it looks like we could finish anywhere between 8th and 10th.  The game will be televised on ESPN2.