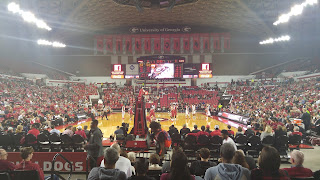 UGA had more offensive rebounds than we had defensive.  This team is not going anywhere until we get some bigs who are capable of blocking somebody out.

The game followed the script of most of our games over the last month or so.  Great start, as we built an early 10-4 lead, that should have been 12-4 but Donta had a great put back dunk waved off due to a BS foul call.  That early lead was short lived, as the offense then went into a funk, going 6+ minutes without a field goal, allowing Georgia to take a lead into the half.  We came back in the second half and took a 4 point lead, but could not hold onto it and seemed to run out of gas in the end.

We've been saying for weeks that Retin needs some help.  Finally, Shannon Hale stepped up while Retin was struggling throughout much of the game.  Hale missed a couple of jump shots and free throws early, but kept fighting and turned in a game high 25 point performance despite having to leave the game with an apparent arm or elbow injury in the first half.  Despite the great scoring performance, Hale was part of the problem on the boards.  He didn't have a single rebound in 25 minutes of play.  Retin played better in the second half and kept the pressure on the dogs after Hale fouled out.  Credit to Georgia for making their free throws down the stretch to put the game away. 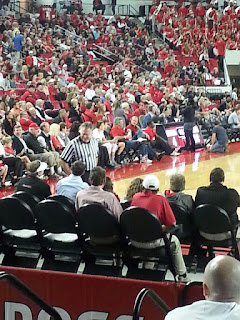 Considering the horrible rebounding and the scoring droughts on offense, we did well just to be in the game.  We played great defense and pretty much shut down their perimeter game, but they hurt us in the paint.  It was encouraging that we shot better from 3 point range, going 11 of 26.  It's nearly impossible to win on the road when you get our-rebounded 48 to 26, and only make 10 of 18 free throws. 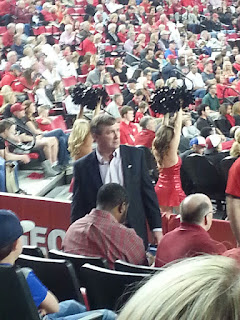 Stegeman Coliseum holds about 10,500, and I would guess there were about 7,000 or so there.  We actually had a nice following over there, I would estimate around 500 Alabama fans were in the house.  Bill Battle was there, and he seems to finally be making it to a few more away games.   We did have some obnoxious Bammers sitting behind us (just kidding!  It was good to see Bobbyjack again!).   The UGA fans seem to have a lot in common with our fan base.  There were lots of empty seats in the season ticket holder sessions, and there is a football centric mindset.  Kirby Smart's attendance was a main attraction.  The UGA fans sat on their hands for most of the game, and it didn't really get loud until they re-took the lead in the second half.  Their spring break is starting, so the student turnout was subpar.  I feel we blew a great opportunity to steal a road win against a team that we matched up reasonably well against in a less than intimidating environment.

That wraps up the regular season with a 17-13 record, 8-10 in the SEC.  The loss kills any chance we had to land an at-large NCAA tournament bid.  It's win the SEC tournament or bust now.  Unfortunately, we've got a terrible draw and I don't see any realistic path to get through Kentucky on Friday.  We will be underdogs against Ole Miss in our first game, Thursday night at 6pm.  We probably need to win that game in order to host the first round NIT game.