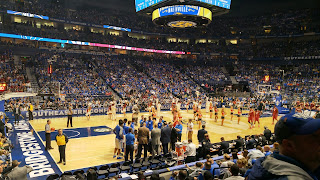 Despite the lopsided score, I actually thought Alabama played better this game than we did in our first two matchups with Kentucky.   We gave it our best shot and did not look intimidated from the opening tip.  Unfortunately, UK also played better.  They are one of the best teams in the country right now, and we could have played our best game of the year and still lost by a significant margin.

Much like the Ole Miss game, Retin got into foul trouble early.  Art Edwards stepped up, and Justin did a solid job of running the point again.  We made some 3s early and actually had a lead about halfway through the first half.  We had a few questionable calls go against us which seemed to kill our momentum, then Kentucky started to get hot, and that was that. 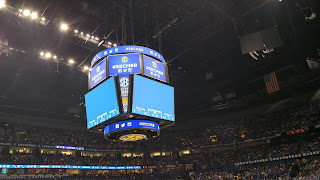 We had no choice but to play zone against them.  It was the right plan, but when they make 13 of 22 from thee-point range, it's an exercise in futility. Murray was on fire from the corner, he scored 23 points and Poythress lit us up, once again, for 20.

After only scoring 1 point in the first half, Retin did everything he could to keep us in the game in the second.  He finished with 18 points, but other than Art's 20 we didn't get significant contributions anywhere else.  Retin also had a great block on a UK dunk attempt in the second half.

Donta had another good game defensively, and Riley did a solid job of getting some rebounds.

My only real complaint is that I felt like we mailed it in a little bit after the Cats made 3 consecutive 3-pointers to stretch the lead over 15.

It was a great atmosphere.  Bridgestone Arena holds 19,000 and it was packed.  We actually had a respectable showing of fans, I would guess just a little under 1,000 scattered throughout.  We were surrounded by Kentucky fans as we were sitting behind their bench, but they were nice and classy as always.  In some ways, they were a little too nice.  There was a guy in front of me who said, "I'm going to cheer for you guys too," and would actually clap or give us a high five whenever we would make a shot, and this was in the first half while the game was still close. I think he was genuinely just being nice and having fun, but it annoyed me a bit as it just illustrated that they didn't view us as being the slightest threat at all. Obviously, we weren't a threat, but that's not the point.  I'm looking forward to the day that we are hated by opposing fans not named auburn or $tate again.

Nashville is a great setting for the tournament.  It's a fun city with lots of bars and restaurants within walking distance of the arena.  Bridgestone arena is nice and while designed for hockey, it's not a bad set up for basketball at all.  Certainly much better than the big football dome stadiums.  I do have two small complaints.  We got to the arena 30 minutes early and barely made it in before tip-off due to the fact that they don't have enough entrances and everybody must walk through a metal detector.  Also, I went to the concession stand at halftime and they were out of hotdogs, which they didn't realize until after they charged me for my hotdog, so by the time they gave me my refund I was scrambling to make it back to my seat in time for the start of the second half.

Up next, selection Sunday.  The NIT selection show is at 7:30 Sunday night on ESPNU.  I'm actually excited about watching this team in the NIT tournament.  My prediction is that we will be a 4 seed, hosting a show down with the UAB Blazers Tuesday night.
Posted by DJC at 10:58 AM