The Tide showed off its depth by getting 59 points off the bench and cruising to a relatively easy win over the Ball State Cardinals.  The beginning of the game resembled the Alabama v. LSU football contest from last weekend, with the scoreboard still reading goose eggs going into the first media timeout.  Thankfully Shannon Hale provided a spark off the bench while the defense continued to shut down the cardinals.  Bama led by as many as 15 in the first half and took a 10 point lead into the locker room at half time.

Alabama put the game away in short order in the second half, building a 29 point lead with 9 minutes to play, before taking their foot off the gas a bit and coasting to an 18 point win.  Hale was the leading scorer with 19 points.  That's the kind of game we need to get consistently from the senior.  It was great to see Davis get back on track, he was 5 of 7 from 3 point range and scored 17 points.  I was beginning to doubt AJ Junior's ability after the first two games, but he proved he has a role on this team by scoring 13 points including 3 for 3 from beyond the arc.  More importantly, he had 6 assists with only one turnover, 3 steals, and an impressive 5 rebounds in only 18 minutes of playing time.

We continued to struggle at the free throw line, making only 13 of 22.  That must improve if we are going to be competitive in the big games coming up on our schedule.  I think we have the potential to be an outstanding defensive team.  Ball State is a fairly good shooting team, but we held them under 25% from 3 point range.  We forced several turnovers by pressing after the rare made free throw, and the transition defense was outstanding.  Ball State did not have any fast break points. 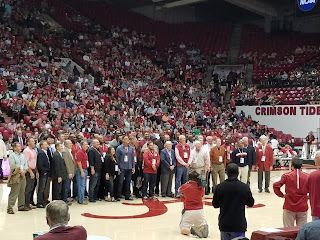 Former players were honored at halftime, and I think it's great that Coach Johnson is inviting the past greats to have an active role in the program.  After having no reunions of this type in the past 20 years, we've had 2 in the last two seasons.  I had the pleasure of sitting next to Leon Marlaire and his wife.  Mr Marlaire played on the 1956 Rocket 8 team.  They were super-nice people and still very knowledgeable and passionate about Alabama basketball.

The crowd was a little disappointing.  I would estimate only about 7,000 or so were on hand, and it was a fairly low key environment for the most part.

Up next, hopefully we can continue to feast on mid-majors from the Hoosier state, as it's off to Las Vegas for a late-night showdown with the Valparaiso Crusaders at the MGM Grand in the Men Who Speak Up Main Event.  Tip-off is set for 9 p.m. PST, 11 pm central.  There's no TV, but you can watch it live on YouTube
Posted by DJC at 2:30 PM