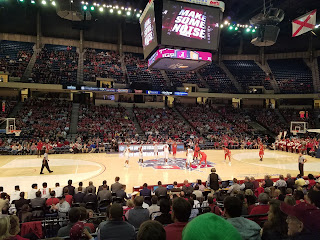 We started the game on a 6-0, and ended the first half on a 5-0 run to make the halftime score a semi-respectable 31-19.  The garbage that happened in between those runs defined the game.  We had some combination of Jimmie Taylor, Shannon Hale, and Riley Norris on the floor for most of the half, and they stunk it up on both ends of the floor, again.  I think it's time to let the upperclassmen watch from the bench and start playing for next year.  Collins really struggled to protect the basketball in the first half as well.

There were also a couple of shot-clock malfunctions that caused us to in-bound the basketball with only a few seconds remaining to shoot.  I don't know if that's attributable to subpar equipment at the BJCC or the fact that our normal clock operator was not there, or some combination of both.

We went 11 minutes without scoring a FG.  Oddly enough, we made 76% of our free throws otherwise it could have been a lot worse.  We built a pretty nice brick house going 3 for 20 from 3 point range.  I guess on the bright side that's a slight improvement from the Oregon game.

We played better in the second half and cut the lead to 10 at a couple of points.  I felt like if we could get it to single digits we would have a chance to make a run, but it seemed every time we got close there would be a defensive lapse resulting in a wide open 3 or layup.

This team has no identity.  There were several possession with absolutely no offensive movement or spacing away from the ball.  We don't have any chemistry or communication on defense.  There was no sense of urgency in the final minutes after we cut the lead to 10.

On the positive side, AJ Jr had another good game.  He scored 17 points and was our only player in double-figures.  Donta Hall only scored 2 after a couple of great games, but he did play nice defense, helping to hold Blossomgame to 9 points and also pulling down 7 rebounds.  Brandon Austin got 10 minutes of playing time, in part because Collins went down with a groin injury in the second half.  Bola started the game and I thought he played well the 6 minutes he was allowed to stay on the court.

I would estimate the crowd was around 6,000 on a cold rainy Sunday afternoon in Birmingham.  Perhaps marginally better than we would have had in Tuscaloosa.  The atmosphere was not near as loud and exciting as the Oregon game was in Birmingham last year.  The crowd did get behind the guys whenever we got close to being within single digits in the second half.

Up next, we travel up I-65 to take on the Arkansas State Red Wolves at the Von Braun Center in Huntsville, AL.  Tipoff is set for 8 p.m. and will be broadcast on SEC Network.  I should have an extra ticket, so if anybody reading this in North Alabama wants to go for free, hit me up.