Well, this was another game we let slip away. Yes, I know we probably shouldn't have been in it to begin with, but Oregon pretty much played like garbage and still won. They decided to play the perimeter game and didn't take advantage of their sizable advantage in the post. I know folks are happy we were in the game, but I'm not... this is now the 3rd game this season we squandered by OUTSUCKING the opponent.

As DJC noted, the Oregon fans were great to us. Next to Hawaii (football) I don't think I've met a bigger group of non-conference opposing fans that were nicer.

The Matthew Knight Arena is magnificent. It is nicer than most NBA facilities. Next to the Pit in New Mexico (which is awesome in its own way), the Knight Arena is about as great as a fan can hope for.

This part is reserved for photos from Corvallis, Newport, and Eugene: 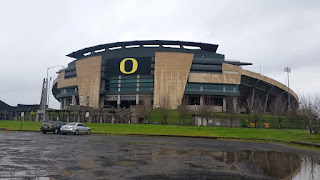 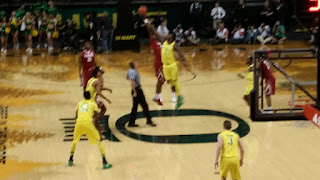 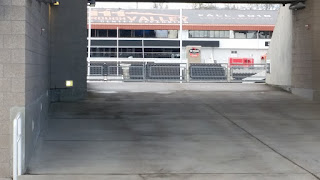 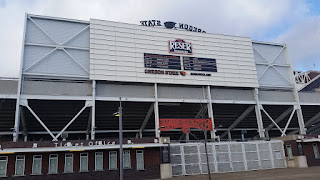 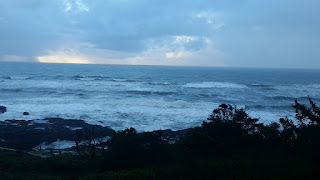 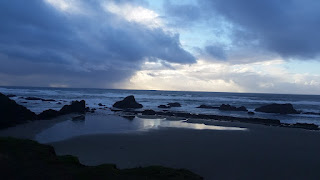 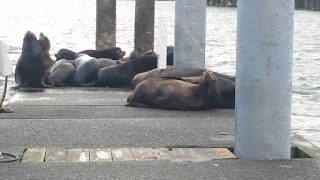 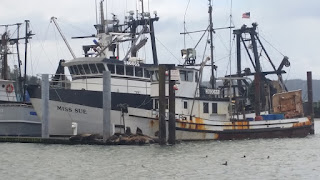 While we are getting things off our chest... I want to give a big FU to Southwest Airlines for attempting to strand me in STL Friday. As I landed in STL to connect to my flight to PDX I see it was canceled. There were weather issues in Portland, but only SWA decided to cancel flights out there. They did offer me a flight for SUNDAY. Needless to say I had do some quick rerouting on my own. If I wasn't an experienced traveler I probably would have told them to send me home.

Delta saved the day... sort of. Was able to book a flight to PDX via Salt Lake City. I get into SLC and try to retrieve my boarding pass for PDX. Says 'my trip is complete.' At this point I'm livid so I run to the Delta desk and after about 20 minutes they put me BACK on the fight to PDX. Total travel time: 14 hours 32 minutes.

We ended up staying at the same hotel as the team in Eugene (Hilton). Saw a few players and coaches wandering around... I'm not THAT fan that goes up to people so we left them alone.

Return flight... seems like the team was following me. You all will be happy to hear Avery Johnson DID NOT have a middle seat on the plane. The team was mostly scattered across first class and Delta Comfort. While boarding I spoke to Associate Head Coach Bob Simon for about 5 minutes. Very pleasant guy and someone I think is an asset to the program. I put the bug in his ear to tell Bill Battle about how nice the Knight Arena is and how we could use something like this in Tuscaloosa. We also spoke about the game... again, very cordial and kept it real. Since that was an off the cuff talk I'd like to keep it that way.

Observation about the team... I've said to DJC that there doesn't seem to be much chemistry on the court which probably is why we're losing all of these close games.

A lot of folks have said (and I agreed with up until this game) our substitution 'patterns' has not worked and have laid the blame at Coach Johnson's feet. I now feel differently... I believe the coaches are frustrated and are trying ANYTHING to get the most out of the roster. I believe there is a divide somewhere that is being worked on. Kind of reminds me of Grant's 2nd year during the St Thomas debacle (which DJC and I were also in attendance for).

In short, I don't think this team on or off the court has much chemistry. This is purely observations during the game and watching body language of the players at the gate. I could be wrong, but in most cases I'm pretty good at spotting those kind of things.

I am extremely disappointed in the play of our upperclassmen. I had high (higher than most) hopes for Jimmie Taylor, but it seems like he's about to rot on the bench. DJC already said what I probably think about Hale, and Norris has taken a huge step back this year. I counted 3 occasions during the game when he had an open 3 look and passed on it. I'm not sure what is up with him, but that struck me as odd. He's still hitting the boards (7) though so at least he's giving effort.

We were 2-19 from 3... with Collins being to only one to hit a 3. When Davis took his last 3 after Oregon hit us with a 3 as the shot clock expired, I looked at DJC and asked why is he taking that shot cold? There are a lot of head-scratching moments that defined this game. Oregon didn't win the game... we straight up outsucked them.

I'm not sure what the rest of this season will be, but if we don't pull the upset on Clemson I'm not sure we reach 16 wins.

Posted by bobbyjack at 9:20 AM