If you haven't already, please read Ron Steele's comment to Msmilie's preview below. He provides great insight and far more detail than I will be able to here. 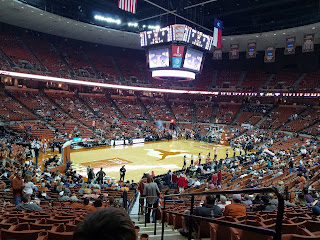 That being said, we were outplayed, out coached, and out hustled.  The first half went about as well as we could hope, so that's the good news, the starting lineup appears to be set.

I question several of Coach Johnson decisions in the second half.  Shaka made adjustments, and we didn't.  Our bigs could not defend theirs one on one in the post, but there were no double teams and no weak side help.  Frankly, I was surprised that Shaka didn't exploit this more.

Texas had a huge question mark at pg, and we didn't even try to take advantage of that. Outside of the rare made free throw, we never pressed. When their shots were not falling they went to the dribble drive, and we could not stop them.   Against a team that has struggled to shoot and rebound, we never bothered to even try a zone defense.

Texas did what we should have, and pressed . I thought we were timid against the press, and it took us out of our comfort zone on offense.

Despite all of that, after blowing the 12 point halftime lead, we were still in a tie game with 4 minutes to play, but we showed no poise down the stretch. It was like every offensive possession was pre scripted and we wouldn't adjust come hell or high water. Most of the time it involved jacking up a contested, off balance 3, but there were also a few ill conceived drives to the basket resulting in blocked shots mixed in.  What's maddening is we had open, better options on many of these plays, and the longhorns kept missing free throws or turning it over to give us opportunities that we failed to take advantage of. 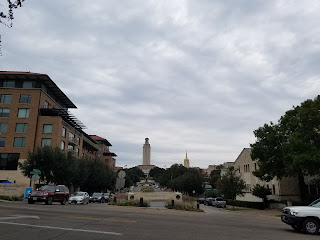 Watching this team shoot free throws makes me want to bang my head against a wall.  I am thinking of petitioning the NCAA to add a rule allowing teams to "decline" awarded free throws and take the ball out of bounds instead.

As for individual performances, I thought Collins and AJ played well.  Dazon had a solid game but needs to finish around the basket. Jimmie had an awesome dunk but didn't do much else.  Riley knocked down a 3 that was huge at the time and played well offensively, but was a liability on the other end.  Hale was at least more aggressive but fouled out in about 12 minutes.  With Key and Ingram both on the bench, we predictably endured a scoring drought that allowed Texas back in the game.

To be brutally honest,  at a high level I saw two mediocre at best basketball teams that will be lucky to sniff the NIT barring vast improvements.

The Erwin center is nice enough, and would probably rate in the top 5 of SEC arenas,  but that's more of an indictment the conference's facilities than anything else. It's a bit cavernous and the seats aren't close to the floor, so it's not a very intimidating environment.  I would guess there was only about 5,000 at most people there, with a couple hundred Bama fans scattered throughout.  The few Texas fans I talked to were pleasant hosts and passed along well wishes to our football team.  To their credit, the small crowd got behind them during their comeback run and down the stretch and I thought their players fed off the energy. 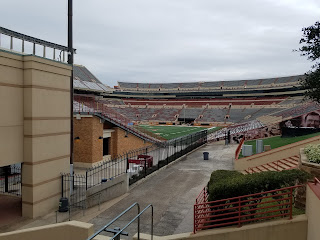 Despite the poor basketball, it was a real pleasure to finally meet Msmilie and his wife. I enjoyed watching the game and hanging out with them.  He's a good guy and knows the game, but he should probably consider letting his better half handle the driving duties :)

Up next, we go to Oregon for a 5pm cst, 3 pacific tipoff in Eugene next Sunday.  The ducks were picked to be a top 5 team, but have been up and down. It's a bad match up on paper, but of course would be a huge win if we can somehow pull it off.  Bobby jack and I are making the trip to give you a first hand account.