Missed free throws and turnovers.  That was the story of the game, and ultimately why we were not able to take advantage of the opportunity to upset a top 25 team.

We seemed unprepared for Florida's quickness.  They were very good defensively, and our guards struggled to handle the basketball.  Credit to the team for coming back after Florida ran out to an 18 point lead in the first half.  If nothing else, maybe taking a 6 point lead after trailing by 18 to a good team will give us a confidence boost down the road.  I think most expected us to get run out of the gym at that point, but we continued fighting and made a good game of it.

Bama played particularly well during a stretch early in the second half.  Much like we saw during our recent winning streak, the defense was phenomenal, holding the Gators without a basket for about 6 minutes.  Unfortunately, once we got a 6 point lead we had a defensive lapse which led to a wide open 3, and we missed some free throws and couldn't extend the lead any further.  Florida then switched to a half court trap, and our offense looked totally overwhelmed.  A number of turnovers and fast breaks allowed the Gators to re-take the lead and put the game away relatively easily.

Dazon really struggled with the pressure in particular.  After several double-doubles in recent weeks, he had 8 points and a ridiculous 7 turnovers.  Donta Hall played very well offensively when he was in the game, getting some huge rebounds and dunks.  He had 12 points and 8 rebounds in only 15 minutes.  The problem is, he fouled out in 15 minutes.  If we could have kept him on the floor another 10 minutes or so, this game might have turned out differently.  Davis had another good game scoring 10 points, and Braxton Key had another terrific game with 24 points and 5 rebounds. 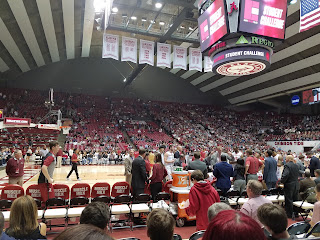 The student turnout was great, as the student section was nearly full.  The rest of the crowd was pathetic.  I would guess no more than about 5,500 were there, including about 400 or so Gator fans who took advantage of the opportunity to move closer to the court during the first media timeout.  I don't understand our fan base.  With half of the state dealing with ice issues we get a reasonable turnout Saturday against a pretty bad Vanderbilt team, but we can't be bothered to show up to support a team on a modest winning streak against a top 25 ranked opponent?  You can see the contrast in the pic above from the student section and Tide Pride sections.

Up next, we travel to Baton Rouge Saturday to take on a talented but woefully under-performing LSU Tigers squad.  Tip-off is at 2:30 pm on the SEC Network.  I am going to the game, but likely will not post a recap until some time Monday afternoon, as I'm also going to Memphis Sunday to watch JaMychal Green and the Grizzlies beat down my Bulls.