Behind more great defense and rebounding, Alabama rolled to a 4-1 start in SEC play with a relatively uneventful win over a struggling Missouri team.

Both teams primarily ran a zone defense, although Bama did a fair amount of trapping that was relatively effective.  With both teams struggling to shoot, the game did not have much of a flow.  We ended up 9 of 27 from three point range, but made only 3 of 15 in the first half.  I would still like to see more dribble drive from Dazon and Braxton when the jump shots aren't falling.

After leading only 26-19 at halftime, we had much better ball spacing and movement in the second half, which led to more open 3s, particularly in the corners, and we were able to stretch the lead to double-digits.  It never felt like the game was in danger, but we were never able to comfortably put them away either.

It was a team effort, with Riley, Dazon, Key, and AJ all scoring in double-digits.  Corban Collins got the start over AJ following his great effort in Baton Rouge, but he struggled in this game, scoring only 2 points and going 0 for 6 from downtown.

Jimmie played well off the bench with 9 rebounds and he did a fantastic job of defending the rim.  His contributions were badly needed, as Donta fouled out again in 16 minutes of play.

Dazon Ingram is going to have to take better care of the basketball if he is going to continue to run the point.  He had 4 turnovers, and they were mostly unforced.  We ended up with 12 turnovers, which isn't an egregious number, but they all seemed to either cost us an easy opportunity to score or came at bad times when we were on the verge of putting the game away. 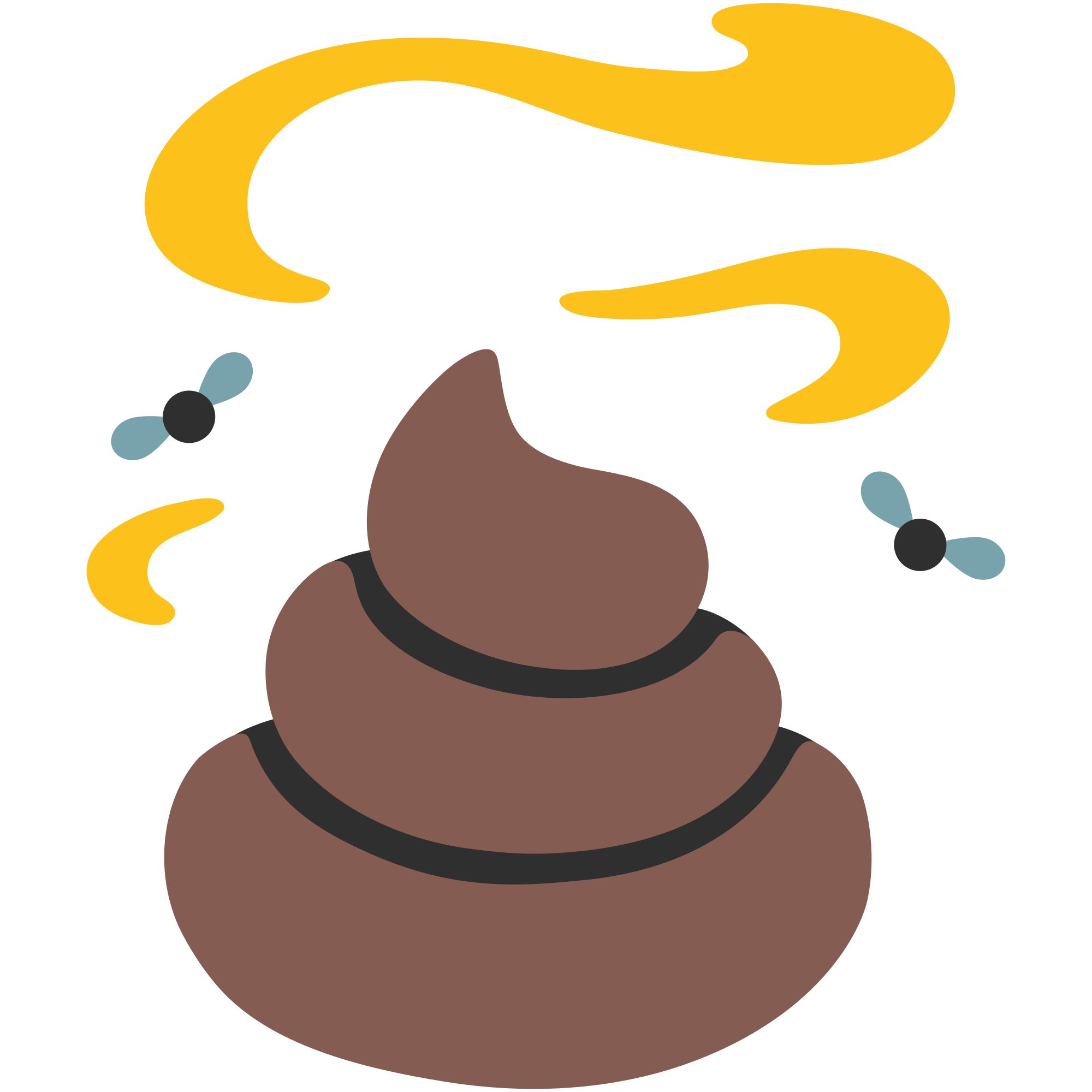 Something has to be done about this.  It's already at least cost us a chance at a top 25 RPI win against Florida, and with the schedule getting much tougher from here on, we will not get the wins we need to play in the postseason if we have more games shooting under 50% like we did last night.  I don't think the answer is to just shoot more in practice.  There are a number of problems.  For starters, a few guys don't even have the same routine.  For example,  I noticed sometimes Jimmie bounces 3 times, holds the ball and takes a deep breath, then bounces it 3 more times and shoots.  Often times on the second shot, he'll only bounce it once after picking it up after the first 3.  Sometimes he just bounces it twice instead of 3 times.  Free throws are all about muscle memory, repetition, and concentration.  It's important to get into a habit of having the same routine each time you go to the line.  Dazon seems to rush his shot a bit, I'd like to see him take a few extra seconds and catch his breath.  Riley's release isn't as fluid on his free throws as his jump shots for whatever reason.  I wish we would invest in something like this.  The cliff's notes version is it's a software program that analyzes the arc of your shot and gives you feedback so that you can try to get to the optimal 45 degree mark.  I think practicing with something like this could tremendously improve the form on our guys' free throw attempts.  Unfortunately, I don't think there is an overnight solution to this glaring problem. 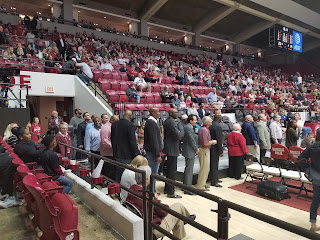 The 1987 SEC Regular Season and SEC Tournament Champions were honored at halftime.  This was the team that made me a huge Alabama basketball fan.  At 7 years old,  I was only in the 3rd grade at the time, and my Dad took me to my first basketball game, an overtime win over Georgia in what was then known as Memorial Coliseum.  I still remember counting the 3s Mark Gottfried made in a row while warming up that night, and I'll never forget the disappointment and sadness when that season ended with a loss to Providence.  I despise Billy Donovan to this day. 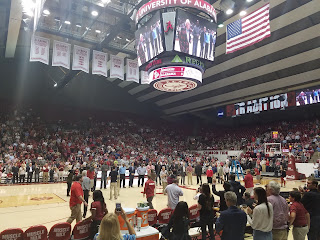 I was glad that Mark Gottfried received a mostly positive reception.  While none of us like the way he ended his tenure as head coach, this particular event was about the reunion of a special group of teammates.  I appreciate his contributions as a player, and as a coach, up until about 2006.

We had a Dodger stadium type crowd thanks to a combination of a 6pm Wednesday night tipoff and horrific traffic coming from Birmingham.  I would guess there was barely 4,000 there at tip off, but it was up to around 6,500 by the 8 minute mark of the first half.  I spoke to several people around me who said it took them nearly 2 hours to drive from Birmingham.  My traffic app re-routed me to Highway 216, and we were able to make it in an hour and 10 minutes, just in time for tip-off.

Up next, more Tigers, this time of the farmville variety as we travel across the state to the ugliest village on the plains to take on Bruce Pearl's auburn squad.  As I said, to this point we've won the games we are supposed to win, but the next 6 are 50/50 propositions at best, so we'll need to take care of the basketball and make some more free throws if we want to stay in the top 4 in the SEC standings.  Tip off is set for 3 pm on ESPNU.
Posted by DJC at 2:27 PM