The roller coaster season came to an end in the first round of the NIT as Bama had no answer for the Spiders' offense. 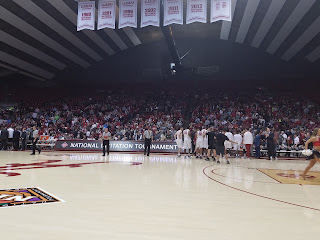 Donta, Jimmie, and Key all did a fairly good job on Cline for most of the first half.  He only had 2 points and 2 fouls in the first half.  Unfortunately, he is a great passer, and  was able to get his shooters some open looks in their hybrid Princeton offense.  Jones and Buckingham really made us pay from the 3 point line.

When we went smaller, playing Bola at the center trying to match their quickness, we went on a 12-0 at the end of the first half and start of the second half to briefly take the lead.  Give credit to Richmond for making the counter-adjustment, and using Cline more in the post.  Personally, I think staying with the smaller lineup as long as we did was a mistake.  We were trying to play their style of game and could not match their quickness or chemistry.  Cline ended up with 15 points and at least half of those were with Corban or Riley trying to guard him one on one in the post in the low block.  To go small against a skilled big man like that you either need to play zone defense or front him to prevent him from getting the ball, and/or double-team him when he gets the ball in the post.   We did neither.  In fairness, given the way they were shooting the ball, I understand being reluctant to play zone, but I think a matchup zone would have been worth trying, at least.

Offensively, we failed to take advantage of our size advantage.  We passed up too many shots and made too many bad passes, resulting in 16 turnovers.  Richmond's help side defense was great, and they really hindered our ability to score in the paint.  I thought we should have posted up Key and Ingram more as they had a nice size advantage on their defender, even though neither is particularly comfortable playing with their backs to the basket.

Corban gave it all he had and ended up with 19 points.  He was inconsistent over the course of the year, but nobody could question his effort and leadership.  He was the last one to walk off the floor and looked totally devasted; I felt awful for him.  Dazon had a solid game with 11 points and I thought Donta had a nice overall game with 9 points.  Key had one of his worst games of the year.  His shot selection was terrible, he had 5 turnovers, many of them unforced, and looked unfocused at times.  AJ, Riley, and Bola all played with great effort despite not putting up the best numbers.

I liked the experimental rules and hope they adapt something similar full time.  The game had a better flow, even if the tempo did not work to our advantage.  There were much fewer free throws shot as a result, and of course this would be the one game we somehow go 7 of 7 at the line.

The official attendance was 4,041, about a thousand less than I would have guessed.  The general admission gets everyone closer to the floor and creates a louder environment, though I felt the crowd was more subdued than in some past NIT games we've hosted.  I was fortunate to get great floor seats, and it's amazing how much faster the game moves from that perspective.  I could sense Coach Johnson was frustrated throughout the game, he spent almost the entire time trying direct the guys on where to go offensively, and it just seemed like he was never able to get everyone on the same page.

Up next, the off season, and I will turn my sports attention primarily to baseball over the next few months.  At some point next week, after I return from watching the WORLD CHAMPION CHICAGO CUBS in Arizona this weekend, I will post my annual "End of the season recap and state of the progam manifesto" before disappearing for a while.  Until then, enjoy the tournament and good luck on your brackets!