Sometimes your best just isn't good enough.  Alabama played as hard and as well as could reasonably be expected, but Kentucky was just too good. 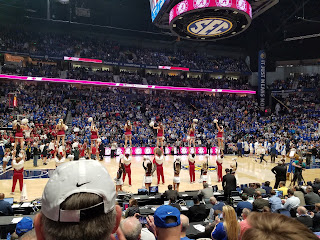 We had another great defensive performance to start the game.  The zone was very effective and we managed to rebound well out of it.  We jumped out to a 9-2 lead and even had a 10 point lead before the dreaded but predictable 4 minute scoring drought erased that.  The team showed a lot of poise when UK took a 7 point lead in the first half with their crowd into the game.  We battled back and got into the locker room trailing by only 1.

I agree with MSmilie's comment about there being two key plays to the game.  We played solid defense for 29.5 seconds but then fouled a jump shooter for an "and one" that sparked a UK run.  We battled back from that, but free throw shooting bit us again.  While we were a respectable 15 of 20 from the line, we missed some big ones down the stretch.  Trailing 64 to 61 with just under 4 minutes left, the Cats foolishly fouled Key as he put up a desperation 3 with the shot clock expiring.  With a chance to tie the game, Key made only 1 out of the 3, and Kentucky got a 3 point play at the other end.  The next possession Riley got to the line but only made one out of two, so it remained a two possession game, and then Fox took over and that was that.

Dazon had a great game scoring 17 points before fouling out.  Corban gave us a solid 15 minutes.  Key was in double digits with 11 points but he didn't have one of his better games.  We had a nice balanced attack with 7 guys scoring 7 or more points.  I was a little surprised Lawson Schaffer got into the game late ahead of Brandon Austin when Dazon fouled out.  I question why Davis did not get into the game at the very end, and I also didn't like our strategy the final minute. We were content to take the quick 2 and hope UK would miss free throws when I think we should have taken our chances with some 3s at some point.

The arena was packed and was over 90% Kentucky fans.  Even sitting in the Alabama section we were outnumbered, but the 700 or so Bama fans there did our best to be heard.  The UK fans around us were knowledgeable and classy as usual, and they were very complimentary of our team.  Thanks again to my friend for hooking me up with an awesome ticket for face value.

Up next, it's selection Sunday.  Though we won't be invited to the big dance, we are likely headed to the NIT.  I am hoping for a 3 seed and hosting the first round.  The NIT selection show will air at 7:30 pm on ESPNU.
Posted by DJC at 2:13 PM