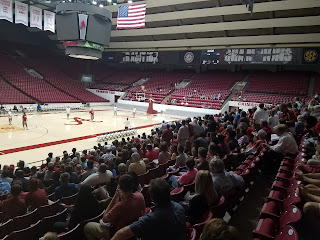 Credit to Allen Iverson, it never gets old.

My apologies for the delay in posting this report, but the day job obligations make it difficult to contribute here in a timely manner.

The freshmen not only lived up to the hype, but far exceeded my expectation.  John Petty in his current form would have been the best player on last year's team.  Collin Sexton is even better.  We have shooters, we have depth, and we will have the best post game we've had since JaMychal Green graduated.

The event opened with Coach Johnson thanking the fans and bringing out the team.  He explained they had already been practicing for about an hour and a half in the back gym, and reminded everybody that what we were about to see was far from a finished product.  He said this was the 7th of 10 practices allowed for the Canada trip, and the team will leave this Friday.

I think it was telling that Sexton walked out first.  He's clearly establishing himself as the leader of this team, and his body language and demeanor exudes a certain arrogance and swag that is difficult to define.  He is obviously super-competitive and will no doubt rub some people the wrong way in the heat of the battle, but he's exactly what this team and program have needed.

They began by splitting into crimson and white teams and running skeleton half court "bail out" plays off the pick and roll, with different players initiating the play at the point.   Coach Johnson seems to have confidence in Sexton, Petty, Key, and AJ all handling the ball.  These sets usually involved 3 or 4 passes and ended with an open 3 or an entry pass to the low post for a dunk.

At one point Sexton drove in and attempted a behind the back pass to a big that was intercepted by Giddens (I think, can't remember for sure).  Anyway, Coach didn't get onto Collin for the unnecessary turnover.  Instead, he said, "in that situation, know where your defender is, and here's what you do" as he faked the same pass that Sexton made for the turnover and layed it in.

They ran a number of full court, fast break drills with either 3 or 4 players and 3-4 passes per trip.  Coach mentioned after the practice that he thinks we will be much improved with our decision making and passing ability, and you could see those skills verified in these drills.  They also worked on using the rim to finish on the opposite side in transition.

They also worked on the full court press and press-break, running what coach termed a "45 into a 42" which was an initial showing of a full court man to man, switching into a 2-2-1 full court trap.  Coach said we have more speed and depth (which is a huge understatement) and we will press more.  I suspect with the lack of a true point guard, we will also see more presses from our opposition.  AJ got a steal from Riley, but otherwise we generally did a good job of breaking the press.

They ran some half court plays simulating coming out of a timeout against a 2-3 zone with varying degrees of success.

There was a brief scrimmage that was incredibly fun to watch.  Petty and Sexton took turns making about 5 threes in a row.  They both had some amazing passes.  Davis, Riley, and Herb all shot well from the perimeter.

While I mostly tried to focus on the new guys, the one player who stood out to me other than Petty and Sexton was Donta Hall.  He seems to have really improved his offensive game. He's developed a bit of a baby hook shot and used an up and under move on a couple of occasions as well.  I think he's benefited from having Giddens there to push him.  Giddens is at least as good now as Hall was last year.  Both were effective in defending the rim.  Newcomer Galin Smith is a little undersized at the 4, but he plays physical around the basket and can finish with authority.

This practice did not have the emphasis on rebounding that I saw at the open practice I went to last year, and that is one area that concerns me a bit.  I do think we will miss Bola on the boards.  I'd like to see Galin beef up a bit and grow into that type of role.

Alex Reese has talent but seems to be adjusting to the speed of the college game.  I can see him growing into a stretch 4 type, but right now he's just a bit slow and not physical.  He did generally make good decisions and passes though.

Herb Jones can be a solid all around player for us.  He's not overly flashy, but has a nice shot, can handle the ball, and plays solid defense.  He probably needs to add a bit of muscle if he's going to play the 3 or the 4.

I hate to keep harping on Sexton and Petty, but wow, those guys are good.  Petty has such a pretty shot, great handles, and seems to have a really high basketball IQ.  There simply aren't enough superlatives to describe Sexton.  He wins the sprints by 30 feet.  He's lightning quick.  He gets great elevation on his jump shot and has a super-quick trigger.  It's like he goes from being closely guarded in the dribble to releasing a perfect shot over the top of his defender in less than half a second.  He makes everything look easy.

Dazon Ingram did not practice due to an injury, and will likely not play much, if at all, in Canada.

The only negative I saw was free throw shooting.  It's not that we don't practice it, Coach would randomly select someone to shoot at various points during the practice, and towards the end he had everyone line up along the baseline and take turns shooting one each.  The goal was to make 7 in a row within 2 minutes else they would run sprints.  After 3 or 4 attempts at this, and never reaching more than 4 in a row, he gave up and moved on to something else.  Even Sexton, who was a 92% free throw shooter in high school, missed 3 in a row at one point.  On the bright side, Hall and Giddens combined to go 7 of 8.

There was a great turnout of close to 3,000 people there.  The night concluded with Coach Johnson taking some questions, but nobody really asked anything particularly interesting.  Coach did note that we beat Vandy last year who made the tournament with a worse record, and we've got one of the most difficult schedules in the country in hopes of building a resume that will get us in.

I know we have an extremely challenging schedule, and I know it was just one practice, but frankly, I'll be very disappointed if we are anywhere near the bubble this year.  If these guys play to their potential and develop chemistry, we will be at least a 5 seed.

Up next, it's off to Montreal to take on the McGill University Redmen.  My understanding is that all 3 of these Canadian teams are very good, with the Carleton team in Ottawa that we play second being the best.  I'll be making the trip north for the McGill game and will post a report when I can.  For those of you remaining in the states, it will be streamed live on rolltide.com.  Buckle Up!
Posted by DJC at 6:18 PM