While the last week has been  alarming with the news of a college basketball recruiting scandal that reared its ugly head in Tuscaloosa, the college basketball season is still expected to tip off in six weeks. That means the show must go on with my roster preview.

DJC did a great job in the previous post in breaking down what we know so far about the FBI investigation into the Adidas/recruiting violations. If you haven't read it yet, I implore you to do so. It's particularly important in light of the resignation of former Alabama staffer, Kobie Baker.

The team held its first practice yesterday, and Collin Sexton - who is presumably the player mentioned in the Kobie Baker episode - did practice. What his status will be going forward isn't set in stone yet, but it is encouraging that none of the evidence presented so far shows that Collin or his family accepted any improper benefits.

Okay, let's get to the roster preview.

Donta Hall - 6'9 - 232 lbs - Junior: Donta played in all 34 games last season, finishing 5th in minutes per game (19.7). His averages for the season were 6.0 ppg, 5.5 rpg, and 1.4 bpg. His field goal percentage was superb (65.8%), but he only attempted 3.5 shots per game. Down the stretch, Donta began to show signs of development on the offensive end so it will be interesting to see if he has a bigger role on offense this season. I wrote a more extensive preview about Donta at the Southeast Hoops website, which you can read here.

Unless you've been living under a rock this week, you already know that the FBI has announced federal charges  against 10 individuals, including 4 assistant coaches, as the result of a massive undercover investigation into various fraud schemes between Adidas, shady sports agents/financial advisers, and college coaches.  My apologies for the delay in reporting about this, but  I wanted to take some time to read through the complaints and various reports and give it some thought before posting.

Let's take a look at what we know now, how it affects us, how it effects other schools that have been identified as referenced in the complaint, and what it may hold for the future of college basketball.

Let me preface this by saying that I hate all of this, but am surprised by none of it.  In my ideal world all the payments would be transparent and in the open and the only thing we would care about is winning on the court.  I take no joy in the likelihood of multiple teams receiving crippling sanctions, whether we are involved or not.  Much more after the jump:

Pitino out at Louisville due to fraud investigation

Surprised it took this long... link

This ties into other coaches at USC, Auburn, OK St, and Arizona implicated in a FBI investigation for fraud.

Bruce Pearl may be next... he's already on the bad side of the NCAA.

Posted by bobbyjack at 11:54 AM No comments:

We're seven weeks from the beginning of one of the most anticipated Alabama basketball seasons in recent memory. While the level of expectations differ among the fanbase, the core expectation is that this team will be the first to represent the university in the NCAA Tournament since 2012. Those expectations will create pressure for this team and coaches. Fortunately, the team has the benefit of a talented and experienced group of returning players as well as a top 10 recruiting class. Let's meet that roster, starting with the guards.

Collin Sexton - 6'3 - 190 lbs - Freshman: Collin enters his freshman season at Alabama as a top 10 recruit out of high school. The basketball part for Collin should be easy. He's a fierce competitor, capable of playing on or off the ball, can score in bunches, but is also blessed with the quickness and athleticism that will allow him to be a fantastic defender if he buys in on that end of the floor. The biggest hurdle for Collin this season could prove to be managing the hype and expectations that have followed him to Alabama. Should he make a smooth transition, he's capable of putting together an SEC Freshman of the Year type of season.

It's seven weeks from the official start of the 2017-18 season, but recruiting never ends. The staff is currently on the road paying visits to recruits in the 2018, 19 and 20 classes. I've been doing my best to keep up with it all, but the day job comes first. Here is what I can tell you. Click the links for video.

First things first: The SEC Network is premiering an SEC Storied documentary about C.M. Newton on Tuesday, September 26th called Courage Matters: The C.M. Newton Story. That should be good. Tune in.

The final piece of the 2017-18 schedule has been added. This evening, Alabama announced that the University of Alabama-Huntsville will come to Tuscaloosa for an exhibition game on November 6th. It's another strong addition to the schedule. The Chargers have been one of the best programs in Division II in recent years. Last season, they finished with a 26-8 record, a conference tournament championship, and were a 1 seed in the D-II tournament before falling in the Sweet Sixteen. It's a good addition to the schedule. If you're going to play an exhibition against a D-II or NAIA school, you might as well play a good one.

In other news: Jeff Goodman at ESPN announced via Twitter that Alabama will hold a pro day on October 10th. For those that don't know, a pro day is an event in which NBA scouts can visit the school and observe players take part in different workouts. Alabama has several current players on the roster with legitimate pro aspirations so this makes sense.

In other other news: the staff is currently out on the road visiting recruits for the 18 and 19 classes. The 2019 class in particular looks like the next big class for the evolution of the Alabama program under Avery. Here's a rundown of who they have visited over the past week. If I leave anyone out, please let me know in the comments section. 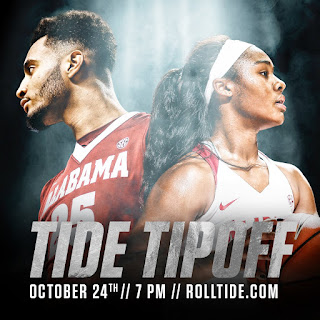 A few things to report today. Let's start with game times. The university has announced tip times for three games.

The season opener against Memphis in Annapolis, Maryland as part of the Veterans Classic will tip at 5:30 P.M. CT. The game will be televised on the CBS Sports Network. That is on Friday, November 10.

The home game vs UCF on Sunday, December 3 will be a 1 P.M. CT tip. ESPNU will televise, but that's a great game on a Sunday afternoon for fans to bring their families, friends, special lady friends, sugar daddies, hell bring an enemy or two if you like. A quality opponent, an easy tip time. No reason Coleman shouldn't be packed for that game.

Finally, the Vulcan Classic match-up vs Texas in Birmingham on Friday December 22 will tip at 8 P.M. CT. ESPN2 will handle the television duties, but this should also be a manageable game for people to make. 8 P.M. on a Friday night. If you live in or relatively close to Birmingham, you won't even have to take the day off to make that 8 P.M. tip. A great opportunity for fans to see a name brand opponent, and the court will be littered with great athletes for both teams. That should be a very fun game.