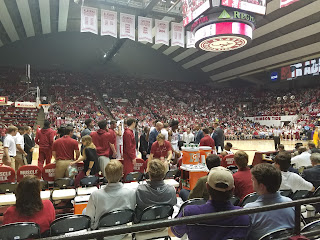 The home opener and debut of Collin Sexton was a successful 22 point victory.  We had another slow start and didn't play particularly well for much of  the first half, but we did not fall as far behind as we have in the other games.  As MSmilie pointed out in the preview, Lipscomb is capable of scoring a lot of points.  They don't have a lot of size, but they have great spacing and ball movement and several prolific shooters.  Garrison Matthews averaged over 30 points per game, but we held him to half of that.

We used the same starting lineup with the 2 bigs and tried to take advantage of our size in the post.  It seemed they realized we couldn't make free throws so they just hacked away.  Lipscomb started the game with some hot shooting, and we had some issues with our switching on defense.  AJ came off the bench and provided a spark to the offense, scoring 9 points in just 10 minutes. Bama had a 9 point lead, but horrendous free throw shooting and a scoring drought to end the first half prevented them from putting the game away.  We were 4 of 11 at the free throw line in the first half, and a pathetic 12 of 32 for 37.5% on the game.  That must improve.

Missed free throws and careless turnovers allowed the Bison to claw back to within a point in the first few minutes of the second half.  Alabama called a timeout, and from that point on we just wore them out with our depth and athleticism.  The team is playing at a much faster pace and seems to have great chemistry in transition.  Donta runs the floor exceptionally well for a big man.  Collin is so quick and explosive, it's practically impossible to keep him from getting to the basket without fouling him, and this opens up the floor for other guys.  JP also showed an ability to finish around the basket and hit the mid-range jump shot.

We pressed a fair amount in the second half but did not trap out of it very much.  Still, I think it served the purpose of speeding up the pace of the game.

Sexton had 22 points despite shooting 5 of 12 from the free throw line.  He was visibly frustrated with himself, as he was a near 90% shooter in high school.  To me, his form just looked out of rhythm.  He held the ball a bit far out in front of him, bent his knees, but his arm motion on the release seemed quick and forced and not in sync with his legs.  I'd like to see all of our shooters develop a more consistent routine at the line.  I know we work on free throws and the general consensus is that coaches can't really do any more than give guys reps, but I'm not sure I buy that line of thinking.  Anyway, I thought he played much more under control and generally made better decisions than what we saw in the Canada games.  Collin is a special player, and we should cherish this one year we get to watch him.

I will go ahead and proclaim that we will not lose to any "one-man" teams, because we can put Herb Jones on that guy and he won't be able to beat us.  Herb's stats weren't that impressive, 6 points, 4 fouls, and 3 rebounds in 25 minutes, but that doesn't adequately reflect the value he brought to the floor as a defender.  He's far exceeded my expectations and I believe he will be the first guy off the bench when Key returns.

I want to talk about Dazon Ingram for a minute.  He's absolutely one of my favorite players on this team.  Dazon came in as a starting point guard his true freshman year before being injured, and was one of our best players last year, playing mostly at guard.  While all the hype has centered on the freshmen, Dazon has maintained a great attitude and is playing just as well seeing most of his minutes at the forward positions.  He may not have the jump shot right now, but with his size, athleticism, versatility, and experience, he adds just as much value to the lineup as the freshmen do.

I've also been pleasantly surprised by Alex Reese.  I saw him play in high school and frankly didn't think he would have the strength to play as a forward at this level.  I thought his high school coach misused him a bit.  The staff has done a great job with him in a short amount of time.  He had 9 rebounds in 16 minutes last night.

It's going to be interesting to see how the rotation plays out when Riley and Key return, as Herb, Reese, and Galin Smith have all earned a spot, in my opinion.  It's a great problem to have.

Overall, this isn't a perfect team, yet.  We have some lapses on defense, unforced turnovers at times, and can't make a free throw, but those things are mostly correctable.  The team seems to be playing with great chemistry and we have several good shooters and 4 or 5 guys capable of scoring 10-20 points per night.  Coach seems to have turned them loose and has a lot of trust in them.  We may take a few ill advised shots early in the shot clock, but I'm okay with that, it means we have confidence.  This sure beats passing up open looks to jack up a contested desperation heave with under 3 seconds on the shot clock.

There was a solid crowd for a Tuesday night non-conference game, I would estimate about 9,000 or so.  It was certainly a much more energetic crowd than the UAH game with the anticipation of many seeing Sexton for the first time.  The student section was mostly full with the exception of the bad seats in the corners, and some students opted to sit in other parts of the arena.  We also saw a few members of the football team there.

Up next, Alabama A&M comes in for a 6pm tipoff Friday night.  If you are coming to the football game Saturday, it starts at 11 am, so you may as well come down the night before and check out this exciting basketball team.  There's no TV, but it will be streamed on SEC Network+.