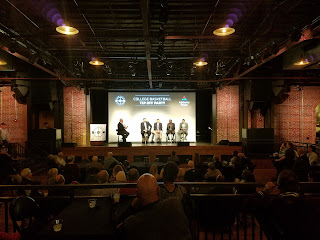 Last night I attended the Birmingham Tip Off Club's open event featuring a panel discussion with Coach Johnson, Bruce Pearl, Rob Ehsan, and Scott Padgett.  It was not very heavily attended; I would say only about 200 or so.  I suspect the World Series going to game 7 kept a lot of people away.  The M.C. started by telling people not to ask any questions regarding the FBI investigation.

-Coach Johnson said we have a very difficult schedule by design.  Vandy made the tournament with 15 losses last year thanks to a difficult schedule.  Every one knows about Arizona, Texas, and Oklahoma, but nearly every team on our schedule can beat us if we don't play well.  He specifically mentioned UCF, Rhode Island, Mercer, and UT-Arlington as teams capable of beating us.

-His biggest concern is rebounding early in the game as "we are going to be starting games off a bit small, but we have the depth and ability to go really big as the game goes on."  This tells me, that unlike in previous years we are going into the season with a set starting lineup in mind.  My guess is 1.Sexton 2. Petty 3. Dazon 4. Key 5. Hall.

-The biggest thing we can do to help is buy tickets, show up, and be loud.  Have a great atmosphere is important.  If you can't use your tickets, get them to someone who will.  It looks bad when we have a lot of empty seats on TV.

-Bruce took it a step further and said "in football we bring 30,000 people on the road, but for basketball we're lucky to get 200.  When we played UAB here and had a lot of fans last year that was one of the best atmospheres we played in all season.  Start following us on the road."  (This is something I really wish Coach Johnson would push as opposed to trying to convince everybody to go to st. Louis for the tournament.)

-Bruce said their biggest concern was "eligibility."  It came out today, unsurprisingly, that Wiley and Purifoy are out indefinitely.

We're just 4 days away from the home exhibition game with UAH!
Posted by DJC at 2:29 PM