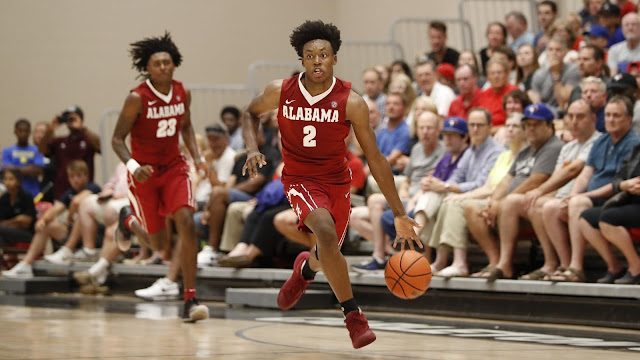 There is anticipation for both the Alabama men's and women's basketball programs this season for the first time in many years. The women's team have already played an exhibition game (a 108-53 win for Kristy Curry's team). Now the men will take the Coleman Coliseum floor for the first game of their season. Their opponent: the Alabama-Huntsville Chargers. Game time is 7 P.M. CT. It will be televised on SEC Network +. If you're a basketball junkie living in the Tuscaloosa area, and have Monday afternoon free, Stillman College will play the University of Mobile prior to Alabama's game. That game will tip at 4:30 P.M. CT. Alabama enters the season ranked 25th in the coaches poll, and is the first team out in the AP poll.

My Two Cents: UAH has thrived under head coach Lennie Acuff, entering his 21st season at UAH, and 27th overall as a head coach. Acuff has won more than 500 games in his career (514-305). Last season, the Chargers won 26 games and were a top seed in the D-2 tournament, their season ending in the regional final. They could be looking at a rebuilding year of sorts after losing their top three scorers from last season, but the program has been so successful over the last decade that I expect them to have another good season.

Players to Watch: The freshman class for Alabama enters this season with a lot of hype. For many Alabama fans, tomorrow night may be the first time they've seen these guys play. Avery has mentioned the confidence that the freshmen have displayed so far in their careers. Will that be on display tomorrow night and throughout the season when the lights come on? It's going to be fun to find out.

Prediction: Avery Johnson mentioned in his press conference on Thursday that the team has struggled on the defensive end in practice, and does not look like a preseason top 25 team at this point. With that in mind, and the fact that UAH is a well-coached team, don't be shocked if the Chargers hang around in this one. Alabama - 82 - UAH - 64
Posted by MSmilie at 11:00 PM