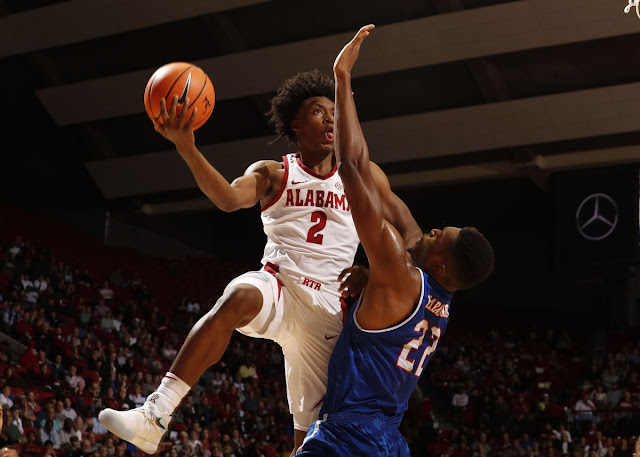 The Alabama men's basketball team will play the first of two games at the Barclays Center in Brooklyn on Friday afternoon. The opponent will be the BYU Cougars. Game time is 1:30 P.M. CT. Alabama enters the game 4-0 while BYU enters with a 3-1 record. No television for this one, but you can stream it through Facebook here. Click the links for team stats and Pomeroy numbers.

My Two Cents: Dave Rose has done a tremendous job at BYU in keeping that program nationally relevant in basketball. In all 12 seasons that Rose has been the head coach, BYU has been selected for the NCAA Tournament (8) or NIT (4). While I do believe the move to the West Coast Conference (WCC) from the Mountain West was the wrong move in hindsight, this is still a top 100 type of program that is annually one of the best offensive teams in the country. Alabama has been inconsistent at best on the defensive end so BYU's offensive skill will present some challenges for our guys. On the flip side, Alabama's length and athleticism could pose some challenges for BYU as well. We could see another high-scoring game on Friday afternoon. It also wouldn't surprise me if we see a tweak to the starting line-up. If Riley is healthy, we may see him get the start. I haven't been crazy about the big line-up with both Donta and Daniel starting, but it was a necessity with both Riley and Braxton out.

Players to Watch: Collin Sexton has been as good as advertised. With the unfortunate news that Michael Porter, Jr. could miss the season with a back injury, Collin is the new favorite to win Freshman of the Year in the conference. Yes, he can score, he can pass the ball, and he's a better defender than some may give him credit for. But here's the stat that I really love through his first three college games: he's only averaging 1 turnover per game. In the last game, he played 32 minutes and only turned the ball over once. In the Canada games I was concerned that he was forcing things too much, and that would lead to high turnover games during the season. To Collin's credit, he's not only playing dynamic basketball, but he's playing under control on both ends. For someone who plays with such intensity, that's impressive.

Alabama has yet to play a team that can be physical around the rim, but that's likely to change this weekend in Brooklyn in both games. A former ESPN top 100 recruit, Yoeli Childs is a 6'8, 225 lb sophomore forward that was named to the All-WCC freshman team. So far his sophomore season is off to a strong start with averages of 13.5 ppg, 7.8 rpg, 2.2 apg, and 2.7 bpg. He's been a nice compliment to the perimeter threats for the Cougars. It won't surprise me if the BYU coaching staff tries to play through Childs early in this game to open up things for their shooters on the perimeter.

Prediction: This is a tough one to predict. Physically, Alabama's quickness and athleticism should cause headaches for BYU. But BYU is capable of dropping 100 on most teams, and Alabama's play on the defensive end has been up and down. Furthermore, you never know how teams are going to play in these November tournaments. How focused are they on the game and opponent during the Thanksgiving holiday? Are they distracted by the environment? We've already seen some ranked teams go down in the early rounds of these events. But as I wrote in the preview for Arlington, I just feel like this Alabama team is different; I have more confidence in the players and coaching staff to overcome challenges. Alabama - 85 - BYU - 78
Posted by MSmilie at 10:00 AM