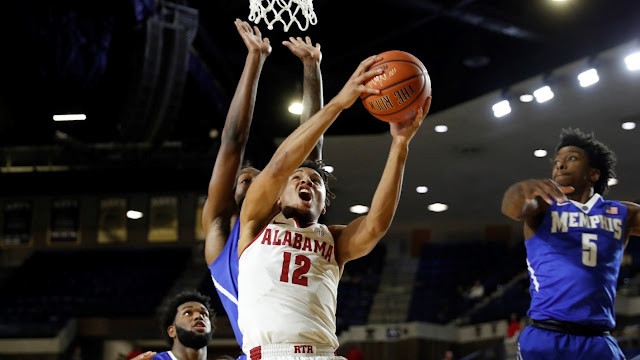 Following an impressive short-handed victory over the Memphis Tigers in the season opener, the Alabama men's basketball team return to Tuscaloosa for their home opener on Tuesday night against the Lipscomb Bisons from the Atlantic Sun conference. Game time is 7 P.M. CT. The game will be televised on the SEC Network.

This game will mark the debut of Collin Sexton. Collin sat out the exhibition game and the opener vs Memphis as the NCAA reviewed his eligibility. He's been cleared, and no doubt his presence in the game on Tuesday will come with a lot of excitement. My hope is we'll see a good fan turnout in Coleman on Tuesday night as a result.

There will be a slight difference in the presentation of the game previews this season. Last season, I would research and post the stats in the preview itself. This season, due to time constraints, I'm just going to link to the team stats page for the opponents, as well as link to Alabama's team stats. Alabama has yet to post their 17-18 stats on the official site, presumably because they've only played one game.

My Two Cents: Don't sleep on Lipscomb. This is a sneaky good team that is projected to challenge for the Atlantic Sun conference title. Seven of their top eight scorers from last season return so this is a veteran team. They can also score: they averaged 85 points per game a season ago, and they're off to a great start this season with a record of 2-0 and a scoring average of 87.5. This is a team that will test Alabama on the defensive end.

Players to Watch: It has to be Collin Sexton for Alabama. He's the highest rated recruit for the program since at least JaMychal Green, who was a 5-star recruit and McDonald's All-American. No doubt he is anxious to take the floor Tuesday.

For Alabama, the scouting report should start with limiting Garrison Mathews. This guy can fill it up. He averaged 20 points per game last season, and is off to a sizzling start this season with a scoring average of 31 points per game through his first two games.

Prediction: The hope is that the momentum generated by Alabama's opening win, along with Collin's debut, will result in a larger than normal crowd for a November weeknight basketball game. Our guys need to get off to a better start than what we saw in the opener. While Memphis had problems putting the ball in the basket, which allowed our guys to crawl back into the game after trailing by as much as 8 early, Lipscomb will likely not have the same issues making shots or creating attempts. Our guys will need a good defensive game plan and efficiency on the offensive end in order to exit with the victory. Alabama - 90 - Lipscomb - 75
Posted by MSmilie at 10:00 AM