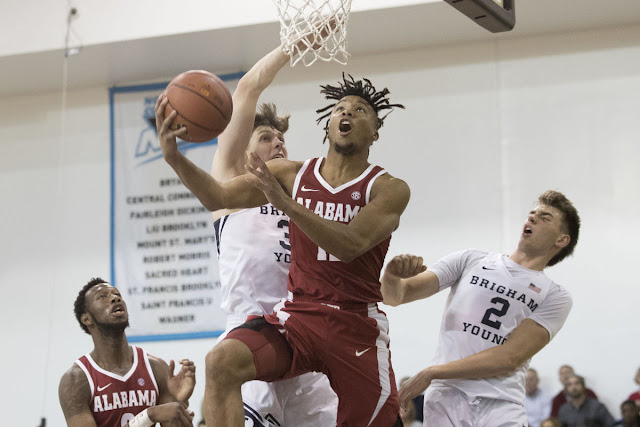 After settling for LIU's Steinberg Wellness Center for their first game in Brooklyn, the Alabama men's basketball team will now play a game at the actual Barclays Center in what is actually known as the Barclays Center Classic. DJC gave a thorough breakdown of the problems with this event in his recap so I'll leave it at that. Needless to say, I'm sure the players, coaches and fans will be happy to finally play in the arena. Their opponent will be the 14th ranked Minnesota Golden Gophers. Game time is 4 P.M. CT. Once again, no television. The game is supposed to be streamed on Facebook here, but the stream for the BYU game was a debacle so who knows. And yes, this game will be tipping sometime during the second half of the football game, but my gut feeling is we'll be looking for a distraction from that game anyway. Click those links for team and Pomeroy stats.

Alabama is ranked in the AP poll for the first time since the 2012-13 season. Avery Johnson and his coaching staff have worked very hard to get the program to this point. The next step is maintaining that position among the nation's top teams. How you do that is winning games against other ranked opponents. This isn't a do or die situation for the team - they will likely have many opportunities against ranked opposition this season - but it is a great opportunity to make a statement at the end of a week in which college basketball has been front and center due to the Thanksgiving tournaments.

My Two Cents: The Gophers are Bama's most difficult opponent to date. They're 6-0, having already notched a quality win with a road victory at Providence. Their best players are all experienced, with at least a year in the program. Alabama is a relatively young team that is playing well, but is still trying to get healthy and fit all of the pieces together. Michigan State is considered the favorite in the Big 10, but Minnesota has more than enough experience and talent to make a run in that league. If our guys can pull off the win, that's one they'll likely be able to keep in their back pocket all season.

Players to Watch: Donta Hall has quietly had a nice season so far. The junior big man is averaging 10.2 ppg, 7.2 rpg, 1.2 apg and 2.6 bpg. Those rebound and block numbers lead the team. Donta was a fringe NBA draft prospect coming into the season, and he's done nothing so far to hurt himself in that regard. He'll be matched up with the best frontcourt he's seen this season so his play in this game will go a long way in determining the final score.

Jordan Murphy has been a beast for the Gophers. The 6'6, 250 lb forward is averaging 22.5 ppg (64% FG), 12.0 rpg, 1.8 apg, 1.1 bpg and 1.1 spg. He's had five double-doubles in six games, and he just missed out on a sixth one in their game against Umass, finishing with 16 points and 9 boards. The Gophers are not a one-man team (four players average double figures, with a fifth averaging just under double figures), but slowing down Murphy has to be priority number one for our guys on the defensive end.

Prediction: In their first five games, Alabama has played tough competition, but has had a distinct advantage in the overall talent department. That won't be the case in this one. The teams look evenly matched on paper, with Alabama perhaps having a little more quickness on the perimeter (maybe a little more depth), and Minnesota having the edge in post play and experience. As I mentioned earlier, for all the excitement around this Alabama team, they're still working to get healthy and put it all together. I don't think this team has come close to their ceiling yet. Minnesota on the other hand is a veteran team that has the experience and chemistry that should result in consistent play for the Gophers all season as long as they can remain healthy. I always favor experience in these types of games. It's a tightly contested game, but Alabama falls short. Minnesota - 81 - Alabama - 75
Posted by MSmilie at 9:00 AM