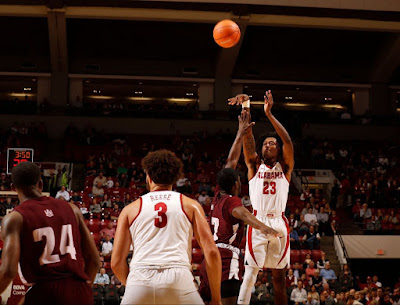 Campus play continues in the Barclays Center Classic on Tuesday night when Alabama hosts the UT Arlington (i.e., the University of Texas at Arlington) Mavericks. Both teams enter the game undefeated. Game time is 8 P.M. CT. The game will be televised on the SEC Network. If you're in the Tuscaloosa area, but have yet to make it out to the game, you're going to want to buy a ticket to this one. Not only will Alabama need the fan support, but this has the potential to be a very entertaining basketball game. Hit the links for team and Pomeroy stats.

My Two Cents: For casual Bama Hoops fans that follow this site, don't be discouraged if Alabama loses this game on Tuesday night to a team you may not be familiar with by name. Arlington is a legit team, with a future pro. If you were to compile a list of the 10 best mid-major teams in college basketball at the conclusion of this season, I think it's very probable that Arlington will be on that list. This is a veteran team, well-coached (Scott Cross could see his name pop up on coaching searches at the conclusion of this season) that has already scored some impressive victories. They went to Norman for a scrimmage and beat the Oklahoma Sooners by a score of 99-84. I watched their previous game, an impressive 89-75 win at BYU. I would not be shocked if Bama is 3-1 heading into their two games in Brooklyn.

Players to Watch: John Petty had quite the night in the previous game. His ten 3-pointers were a single-game Alabama record. We're only three games into the season, but I think it's fair to say John is arguably the best pure shooter the program has had since Ernest Shelton. For the season, John is 15-30 from 3 (that's 50%). That's absurd. And let's not forget that Collin Sexton is also a fine shooter (5-9 from 3 so far this season). In fact, when this team is at full strength, it will have as many as five guys (John, Collin, Dazon, Riley and Braxton) that are all capable of having big nights from the perimeter. It's a nice problem to have.

Arlington is not a one-man team (four players currently averaging double figures), but Kevin Hervey is definitely the centerpiece of this team. I would describe him as a poor man's Kevin Durant: a long (6'9, 230 lbs), athletic forward that can score anywhere on the floor (25.5 ppg/50% FG/40% 3-PT). Hervey also leads this team in rebounds (8.5) and steals (2.0). One of the strengths that I've noticed in Avery's coaching staffs so far in his tenure is the ability to game plan effectively for the opposing team's best player. That will need to be the case again on Tuesday night. If Hervey goes berserk, I'm not sure Bama wins the game.

Prediction: Both teams are playing at a high pace entering this game so I expect a high-scoring game. While Alabama has made strides on the offensive end from recent years, there have been inconsistencies on the defensive end. The first three opponents were unable to take advantage of this, but Arlington is a far better team that matches up well so Bama will get torched if they don't clean up some things on the defensive end. A year ago I would have picked Arlington in this match-up with little hesitation, but this is a different Alabama team than what we've seen in recent years. If the game does become a shootout, I believe this Alabama team is capable of  winning that type of game. I'll go with the home team in this one. Alabama - 82 - Arlington - 81
Posted by MSmilie at 10:00 AM